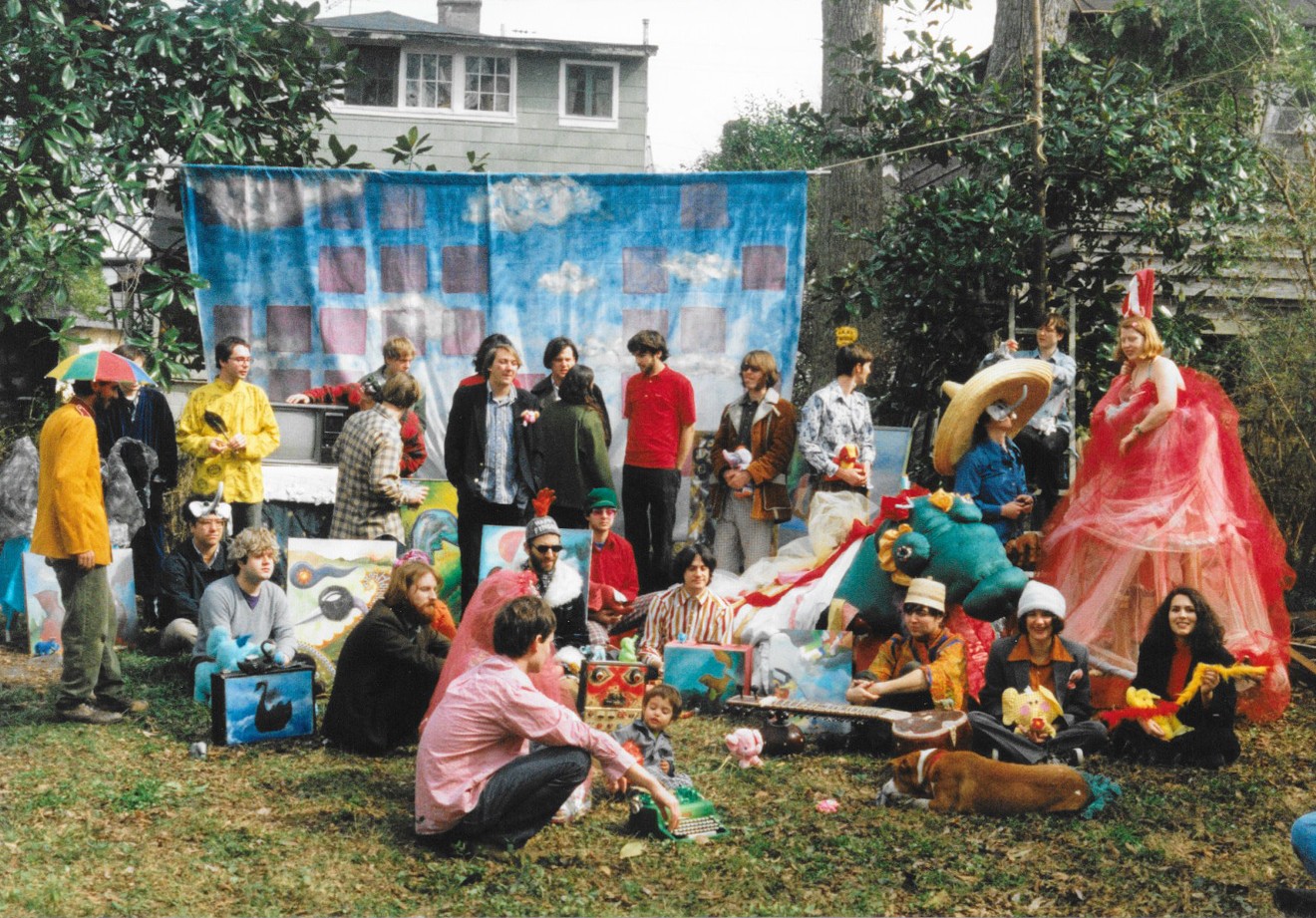 The documentary, which took several years to make, will see its Colorado premiere at the Denver Film Festival on Friday, November 11, and Saturday, November 12. The collective encompasses dozens of bands, including Denver's Apples in Stereo, the Minders, Dressy Bessy and Von Hemmling. Neutral Milk Hotel, another Elephant 6 act, recorded its critically acclaimed 1998 album, In the Aeroplane Over the Sea, at Denver's Pet Sounds, a home-based studio where several of the collective's more notable records also came to life. A 1999 Westword article described the studio as a "shabby yet illustrious recording haven."

The loosely defined collective started with the Apples in Stereo, Neutral Milk Hotel and the Olivia Tremor Control — not the most attention-seeking groups to begin with. “These are people who...I don’t know if ‘secretive’ is the right word, but they kind of keep to themselves,” Stockfleth says. “They’ve sort of avoided the media spotlight in general, some more famously than others.”

The documentary examines the life and careers of the collective’s founding members — Robert Schneider, Will Cullen Hart (Olivia Tremor Control, Circulatory System), Jeff Mangum (Neutral Milk Hotel) and the late Bill Doss (Olivia Tremor Control, Apples in Stereo). They were a group of high school friends from Ruston, Louisiana, and as they began to make their own music, they employed four-track cassette tape recorders, devices that became easier to obtain in the mid-’80s. They used the machines as an instrument rather than just a means of recording — so much so that four-track recorders are now associated with the collective. The resulting experimental recordings and subsequent exodus of the four men to Denver and Athens, Georgia, spawned dozens of bands in subsequent years.

Elephant 6 lacks an easily definable sonic signature aside from the members’ penchant for experimentation and a shared love of 1960s psychedelic pop music. The collective, which also counts Of Montreal, Beulah, Circulatory System and Elf Power among its members, is considered an important movement in the history of American popular music, even if the average person is only vaguely aware of its existence, if at all. It was most active in the ’90s and early 2000s, and while its output has lessened over the years, the Elephant 6 website occasionally promotes new releases by its associated bands.

The Elephant 6 Recording Co. is Stockfleth’s feature debut; since attending film school, he has primarily worked in commercials in the Louisville, Kentucky, area. He says that he tried to keep the on-camera interviews with members of the collective as intimate and non-invasive as possible, employing the “one-man band” approach and eschewing a big crew.

“I think that sort of allowed people to open up, in a way,” he reflects. “It allowed me access into their lives in a way that maybe other people had not been invited.”

Stockfleth’s interest in documenting Elephant 6 blossomed when he met founder Schneider through a mutual friend, after the Apples in Stereo frontman had moved to Kentucky to pursue a math degree. The filmmaker shot some show footage of the Apples in Stereo, and the two discussed past unsuccessful attempts to make an Elephant 6 documentary. Schneider confided in Stockfleth that he thought he might be the one to finally pull it off.

“One of the things I appreciate so much as I’ve gotten to know Robert is his belief in the people around him,” Stockfleth says. “One of his great skills is that he can see potential in people and empower them to sort of do things that maybe they weren’t sure they were going to be able to do.”

The positive reinforcement sent Stockfleth on his way toward making the film. He later became acquainted with Elephant 6 founders Doss and Hart, and the process seemed to be underway.

“It became a game of vouching,” he recalls. “Everyone was like, ‘Who’s this guy that wants to make this movie? Is he cool? Is he going to be a good hang?’ That sort of started down the labyrinth of it that way, very organically.”

Stockfleth was relatively unschooled in the Elephant 6 collective. He was aware of it, but admits that in his musically formative years, his tastes ran more toward 1970s jazz fusion and Afrobeat musicians such as Fela Kuti. He does recall hearing a Neutral Milk Hotel record and finding it distinct in sound, but not necessarily his thing. He also owned a burned copy of Fantasma, the third studio album by Japanese Shibuya-kei artist Cornelius. As luck would have it, Schneider and Hilarie Sidney, also of the Apples in Stereo, appear on one of the songs.

“I think I had a Napster burn of the CD at the time with no liner notes or anything,” Stockfleth says. “I thought it was Sean Lennon or someone like that, but it turns out it was Robert and Hilarie. So when I first met him, he was the guy from the Cornelius song I liked.”

Stockfleth says that in hindsight, he could have put more initial research in, but he credits some of his success to his naiveté. “I think maybe they found it kind of charming that I wasn’t as well versed in what they had done,” he muses. “I would ask very simple questions, and you see it in the film...that was my starting point. I decided I was going to approach this as naively and sincerely as possible.”

He combined new and archival footage of Elephant 6 members, including interviews, concert footage and home videos, and the resulting, visually stimulating collage of images is true to the spirit of the collective. “Their visual language is like a kaleidoscopic, collage, sort of semi-psychedelic vibe,” he explains. “When you start sifting through all this archival material and different things, it’s all from different eras over a ten- to twenty-year period. All these different media have different textures.”

In the film, Schneider says that he and his friends didn’t want their music to sound slick, and Stockfleth took a cue from that sentiment as he put the film together. “I didn’t want it to feel amateur,” he says. “But I wanted it to have some rough edges, not have everything sanded down and polished exactly. [I kept] little accidents and minor mistakes, if you want to call them that. To me, that’s where the personality of a film like this can come in.”

The documentary has a particular sequence that captures the personality of the Elephant 6 Recording Company more than any other point in the film. Schneider tells a story in which he and Mangum are putting together a song based on a banjo record with a scratch that causes a perfect loop. They run the loop through a tape echo machine and manipulate the sound to the point that any evidence of banjo music is eventually lost. The resulting music generated an inaudible frequency, drawing numerous cats into the room.

It’s a funny moment, one that feels analogous to the collective itself. As the tape echo degrades with each repeat, the original meaning may be lost, but something new comes out of it. And as more and more bands began to use the Elephant 6 label, the original artistic vision of the founding members became distorted, as well. That’s by no means a bad thing, because so much great music came out of it.

“It’s just the nature of things,” Stockfleth concludes. “Things have to transform. Nothing is permanent. There’s not stasis, necessarily. It’s an arc that evolves. There’s no way it could have stayed the same. It’s like it had to happen.”

The Elephant 6 Recording Co. will premiere at the Denver Film Festival on Friday, November 11, and Saturday, November 12. For tickets and more information, visit denverfilmfestival.org.
KEEP WESTWORD FREE... Since we started Westword, it has been defined as the free, independent voice of Denver, and we'd like to keep it that way. With local media under siege, it's more important than ever for us to rally support behind funding our local journalism. You can help by participating in our "I Support" program, allowing us to keep offering readers access to our incisive coverage of local news, food and culture with no paywalls.
Make a one-time donation today for as little as $1.