Finding Love at Coachella: Couples Explain What Makes the Festival So Romantic

I got dumped last Saturday night. Over 100 miles from my bedroom, Future was bringing Drake out onto the Coachella main stage. To the opening refrain of “Jumpman,” I watched three bubbling iMessage dots release a compelling emoticon: colon-forward slash, or :/.

Disillusion struck from every angle. I had to pause the live stream to take this guy’s phone call. Let’s call him William: an artist’s assistant seven years my senior.

In the week that followed, an obligation to attend the second weekend of Coachella sloshed through my stomach. Those plans had nothing to do with William; he’s lived in L.A. his whole life but has never bothered to go.

I dreaded the festival because there’s only one Coachella illness that runs as rampant as its infamous cough, and that’s the love bug. Those attending with a significant other seek a tender moment (and a sunset selfie) before reaching peak inebriation. Some scan the crowds in anticipation of a mid-set makeout. Others hope to stumble upon a connection that lasts, like a millennial reincarnation of Nick and Bobbi Ercoline, the Woodstock couple immortalized with a photo of the two embracing under a blanket, Bobbi’s head nestled against her then-boyfriend’s shoulder.

The numbers speak for themselves. In 2015, Tinder reported that usage of the app in areas surrounding the Empire Polo Club surged by 300 percent over the course of the first weekend. This year, the opening weekend sent that figure soaring to 411 percent. Rosette Pambakian, VP of communication and brand at Tinder, said that this increase “isn’t a surprise.” Plenty of fish in the sea — or strewn across Coachella Valley resorts — means plenty of matches to be made.

If you are one public display of affection away from launching your cell phone into a Solo Cup cocktail, Coachella is the very last place to haunt. But here I am, struggling more than ever to pinpoint what it is about the festival, amongst the dirt and dust and early-onset melanoma, that blinds attendees with rose-tinted glasses. So I caught up with a few Coachella couples to ask: How could you possibly find this romantic?

Drew Edmoms and Christopher Rodriguez: The couple trekked to Indio from their home in Mesa, Arizona, on Friday morning to celebrate their upcoming one-year anniversary by seeing Lady Gaga in the flesh.

“We can be whoever we wanna be here. I think that with everything that’s going on in the world right now, we just wanted to go to the one place where we knew we’d be accepted no matter what.” — Rodriguez, front. 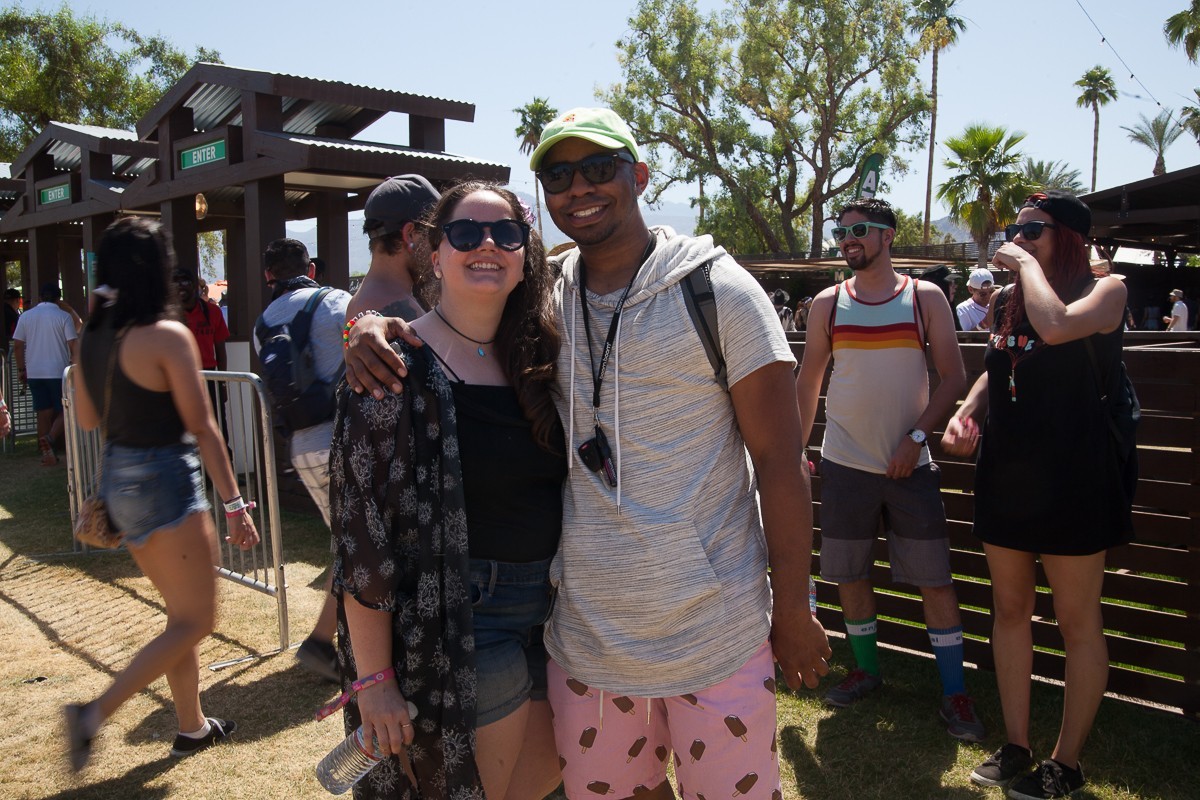 Jenny Hernandez and Yjohnzail Mack: This year marks Hernandez and Mack’s first Coachella together. In the two and a half years that they’ve been dating, Hernandez got Mack hooked on festival culture, prompted by a trip to EDC.

“Being surrounded by other love and positive energy makes you want to be the best version of yourself.” — Hernandez, left.

“There’s also something about working to get here together. We’ve been working, saving nonstop to do it, and it was worth it.” — Mack, right.

Deborah Leonard and Michael Moehrke: This was the year that Leonard’s eighteen-year-old daughter insisted that she needed to attend Coachella, so naturally, she and Moehrke, her partner of nine years, tagged along to supervise.

“I’m a professional, he’s blue-collar, and it’s like, I’m out of the office, away from my computer, and that’s freaking awesome already. Everywhere we go, we meet somebody, we end up talking to somebody. Brings you out of your comfort zone.” — Leonard, left. 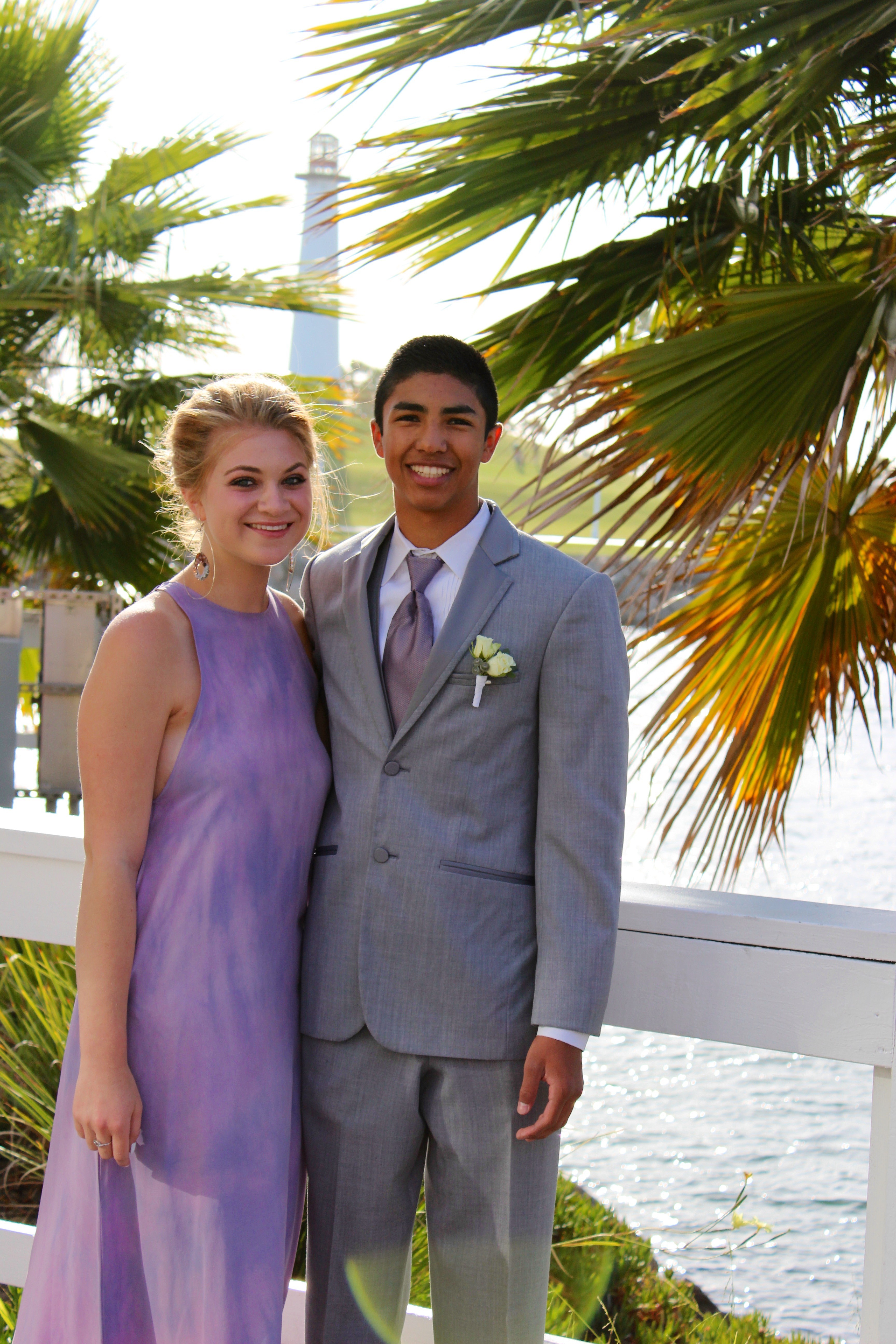 Christian Mendoza and Yardyn Shraga: Shraga and Mendoza met in the final hours of weekend one in 2015. They engaged in some post-festival texting and even hung out a couple times, eventually prompting Mendoza to ask Shraga to his senior prom. That year, she skipped out on her own San Diego high school’s dance to join Mendoza at his in Long Beach.

“There’s this whole buildup. Your emotions are running really high, so I think seeing couples or just all of these people looking beautiful while the grounds are also pretty contributes to this mentality around Coachella that makes people do ridiculous or out-of-the-ordinary things.” — Shraga, left

“Everyone’s pretty happy-go-lucky. You can walk by anyone and say, ‘What’s up?’ and they’ll take kindly to it. Beyond that, people are in such close proximity during the sets, so you end up sharing things — water, whatever the case may be — and end up talking for the rest of the set. You’re stuck there for an hour, at least.” — Mendoza, right

Nothing like physical confinement to set the mood. But I’ve got to admit, the suspension of reality within Coachella’s insular atmosphere has real-life perks. Normal social inhibitions fall by the wayside, encouraging attendees to strike up conversation between sets or scream sweet nothings into someone’s ear over the Sahara Tent bass.


And while Mendoza and Shraga are not presently an item, the origin story of their friendship offers a breath of fresh, wholesome air into the dominant festival romance narrative. Mendoza left for college at the University of Colorado Boulder that fall, but they remain close and in contact. During her senior year of high school, Shraga attended a national high-school journalism convention in Denver. While there, she made the thirty-mile trek to Boulder to visit Mendoza.

See? The Coachella cupid isn’t only aiming for casual encounters facilitated by some substance smuggled into the festival grounds inside a bottle of sunscreen or an undergarment — not that I'm judging. Kudos to a romance so passionate, it implodes in under three days and three nights. Still, if Mendoza and Shraga ever wind up together, the couple should consider hitting up Goldenvoice to sponsor their honeymoon. After all, that prom photo threatens to melt the heart of the harshest cynic (present).