Flipside Music Is an Old-School Guitar Shop in New Denver 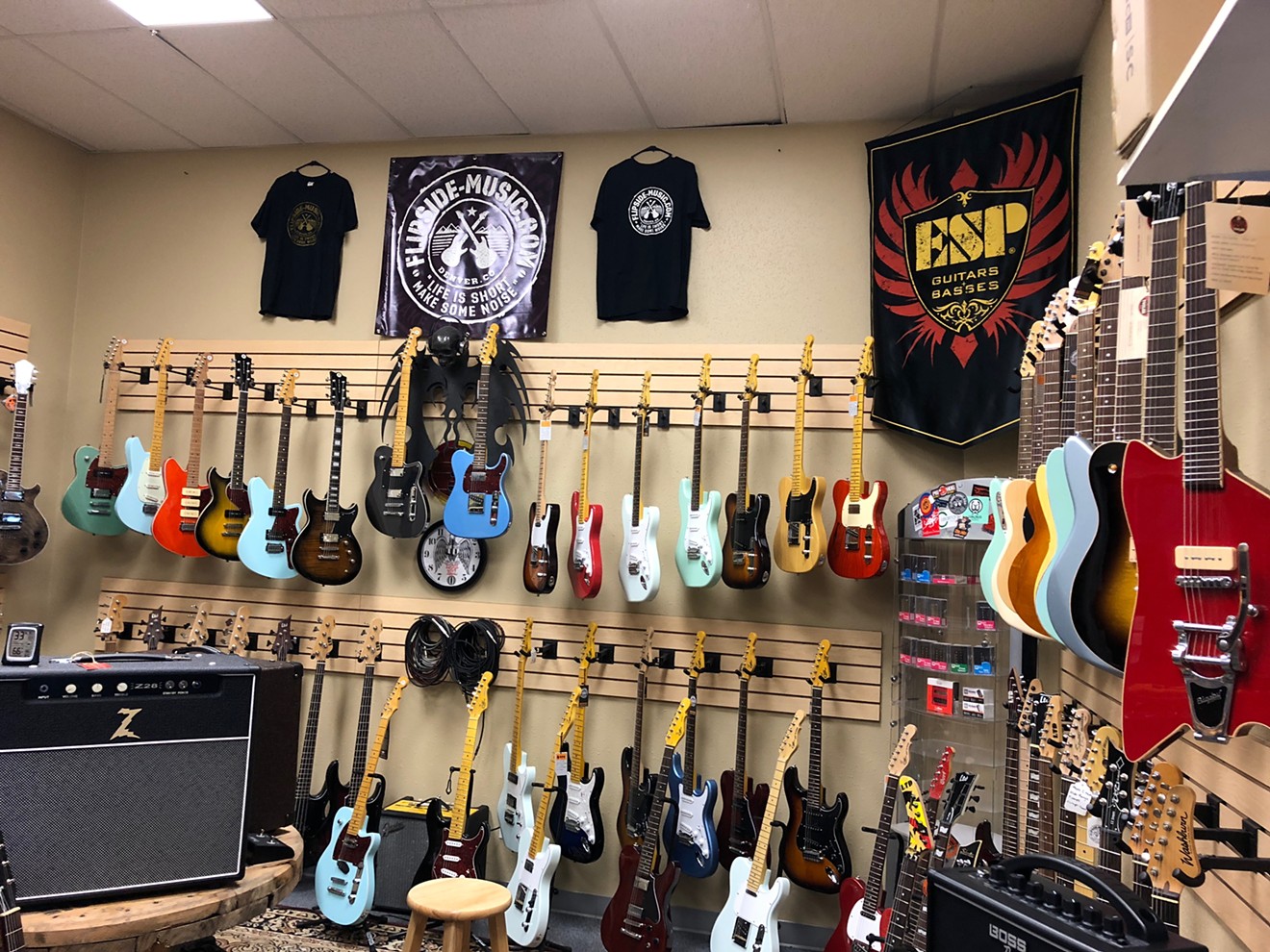 He’d spent years working as a restaurant manager, but after breaking his ankle in 2012, he was homebound for five months and started scheming. Iacovangelo, a longtime guitarist, had been buying and selling gear on eBay, and figured he could turn that into a business. He started making calls, picking up gear and smaller stuff he could work on while at home. Soon his business grew as he sold more gear on eBay and Amazon.

Before opening Flipside Music, at 1673 South Acoma Street, about two and half years ago, Iacovangelo specialized in boutique guitar effect pedals, as they were easier to ship and store.

“They were really cool to mess around with,” he says. They were more budget-friendly for me as a small business to kind of get into. That’s kind of the way it started. Then as we grew and grew, I had a bunch of stuff in my house. It kind of got to the point where I was like, okay, I kind of need my house back.”

He found a warehouse to work out of for a few years, and he says he’d get calls from musicians asking if they could come down and try out the gear.

“We were like two desks and a warehouse,” Iacovangelo says. He'd warn the potential customers and then invite them to his space.

Around the time that the lease on the warehouse was up, he was talking to his friends Jeff Kanan and Nick Sullivan, who head up The Keep Recording, and they mentioned that the space next to their studio was available.

Iacovangelo figured Denver could probably use another spot for gear, as there aren’t a lot of other options besides the big-box stores like Guitar Center. So he opened a brick-and-mortar, picking up guitar lines he thought were good but underrepresented in town, like Reverend and G&L.

Some of the more than 350 guitar effect pedals at Flipside Music.
Jon Solomon
Boutique effect pedals continue to be a big part of his store. While a lot of people watch pedal demos on YouTube, Iacovangelo says the thing he notices is that “what you hear online and what you actually hear sitting in front of the amp and having that air being pushed is two different things, because YouTube compresses the signal. It depends on what kind of speakers you’re listening on or whether you're trying to go through your phone. Sometimes the nuance is lost in the mix.”

Iacovangelo adds that some players order a pedal online and only later discover it doesn't work as they thought it would based on online videos.

“If they come in looking for a fuzz, we have fifteen of them,” Iacovangelo says. “Try all of them. We’ve got it set up where guys can try all of the stuff. It’s not kind of a ‘Are you going to buy that?' kind of situation.’ It’s kind of like going to a shoe store. If you’re looking for sandals, we’re not going to sell you work boots.”

Pedals galore.
Jon Solomon
Iacovangelo has made Flipside Music what old-school music stores used to be, creating a community atmosphere and delivering personal attention to customers. In early 2018, Flipside will also start offering lessons in the back of the store. In addition to selling new and used gear, as well as guitar and amp repair, the store also works with Blue Star Connection, a charity that Iacovangelo says is all about getting instruments to kids who are in cancer centers around the country, and Flipside is a local drop-off location for Blue Star.

“If somebody wants to donate a guitar or amp or musical equipment to give to kids, they can bring it to us,” he says. “We’ll fix those guitars so that they’re playable and have them ready to go, so when a kid needs it, we’ll just send it. We refurbish those things and send them off.”