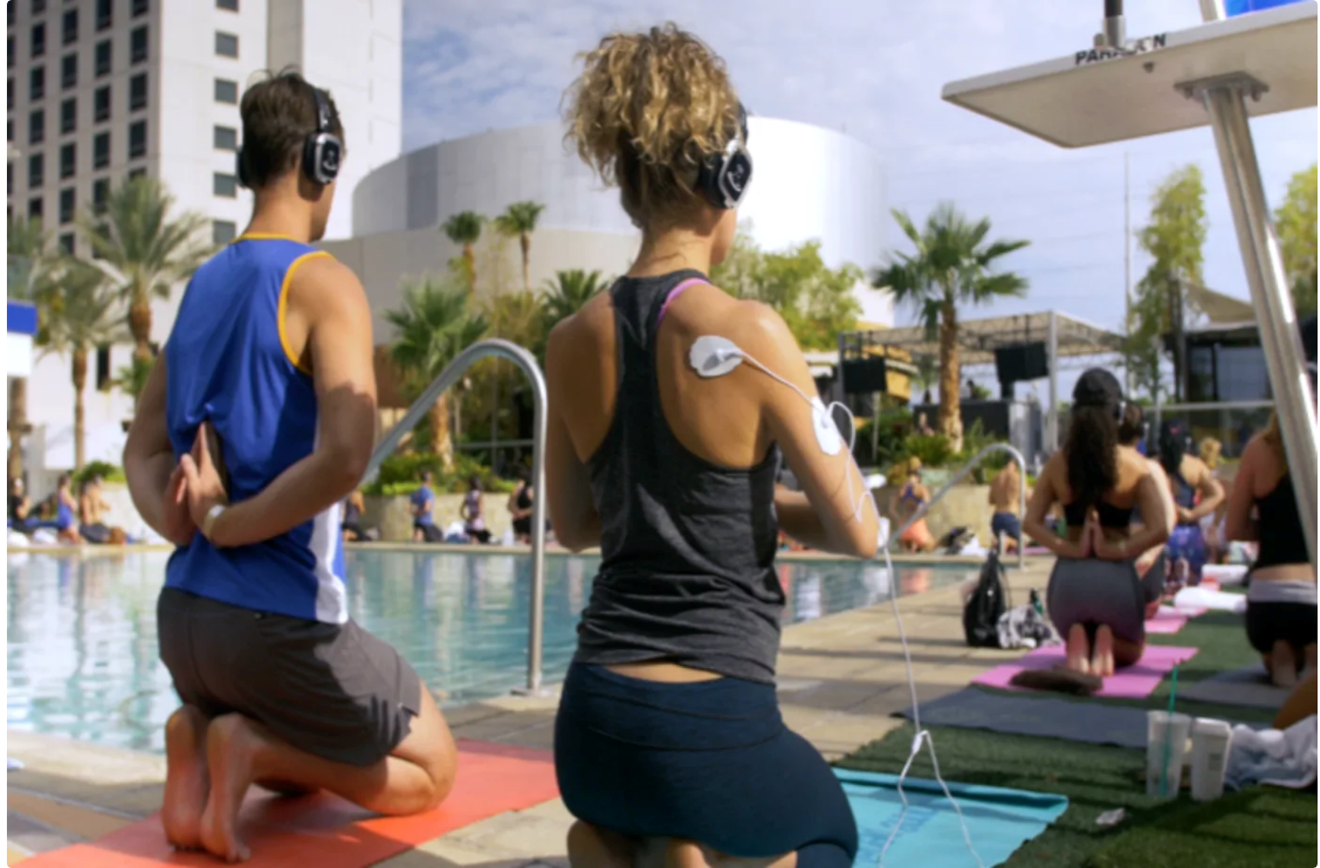 The couple, who love music and extreme sports, first experienced the technology they would adopt after enduring some minor injuries and using Transcutaneous Electrical Nerve Stimulation devices as part of their treatment. A few years ago, Griffin, an engineer, noticed that the TENS device allowed him to physically feel music.

The two began developing what would become Full Body Sound through the SolderWorks company in Westminster. The gadget connects to an audio source using Bluetooth or an auxiliary cord; a pair of electrodes are then placed on a listener’s skin, and an electric current runs through them, stimulating the muscles and nerves and allowing the listener to feel the audio coming through.

“We’re not manipulating different parts of the song to make it feel a certain way. Every song will feel different, because every song is different,” Allison explains. “We’ve identified certain frequencies that maybe we want to put in the background so that other frequencies can come up. But really, what you’re feeling is what the song is.”

Now the company is trying to raise $30,000 through Indiegogo to launch Full Body Sound.

When you use the device, the rhythm of a song tingles through your skin and muscles, says Allison. The experience varies from person to person, and varies with the location of the electrodes on the body and the number of nerve endings a person has.

Fast and slow twitch muscles respond differently to the device, as well, and “the sensation on your arm and your back are really different,” she adds.

Some companies already use vibrational technology to expand the visceral experience of bass frequencies, Allison notes, likening that experience to standing next to a subwoofer at a concert. But Full Body Sound uses electro-stimulation, which grabs both high and low frequencies.

“I’ve been able to feel like I can pick out voices that feel different than other voices,” she says. “There’s a good bit of variation. And it kind of depends on the song and what’s going on in the song. It picks up the peaks of the frequency in the song, which is kind of unique. So you’ll feel the highlights.”


The technology will open up sensory possibilities for deaf people, too. At last year’s Collision Conference in New Orleans, the Hales met a woman who’d had some low-frequency hearing when she was younger but had gradually gone completely deaf. “She had known some different songs that she’d loved from her youth,” Allison says, so they hooked her up to the device and played some of them.

“It was a really moving experience,” she recalls. “The next day, she came back and wanted to be able to feel a bird song, because she’d never been able to hear high frequency.”

The Hales found a video of a bird singing on YouTube and played it through Full Body Sound, and the woman was able to pick up on different patterns of the bird’s song.

Full Body Sound is an audio tactile wearable device that brings an enhanced music experience to music lovers through electrostimulation.
Solderworks
“It was really neat to see it have a big effect on somebody else with a different background than us,” Allison says.

The company is working on getting Full Body Sound devices into concerts, clubs and music festivals. While the technology involves wires and electrodes, making users look a lot like hospital patients, it’s not much more awkward than silent-disco or virtual-reality technologies.

“Different venues are doing different things, but a lot of them have rows of seating along the front where folks who are interested can be next to a speaker or in an optimal place to experience the show,” Allison says. “Our hope is that with our device, we could add an element to that, so that they could really feel it.”
KEEP WESTWORD FREE... Since we started Westword, it has been defined as the free, independent voice of Denver, and we'd like to keep it that way. With local media under siege, it's more important than ever for us to rally support behind funding our local journalism. You can help by participating in our "I Support" program, allowing us to keep offering readers access to our incisive coverage of local news, food and culture with no paywalls.
Make a one-time donation today for as little as $1.