Grace DeVine Breezes Past the Sophomore Slump With Midnight Blue 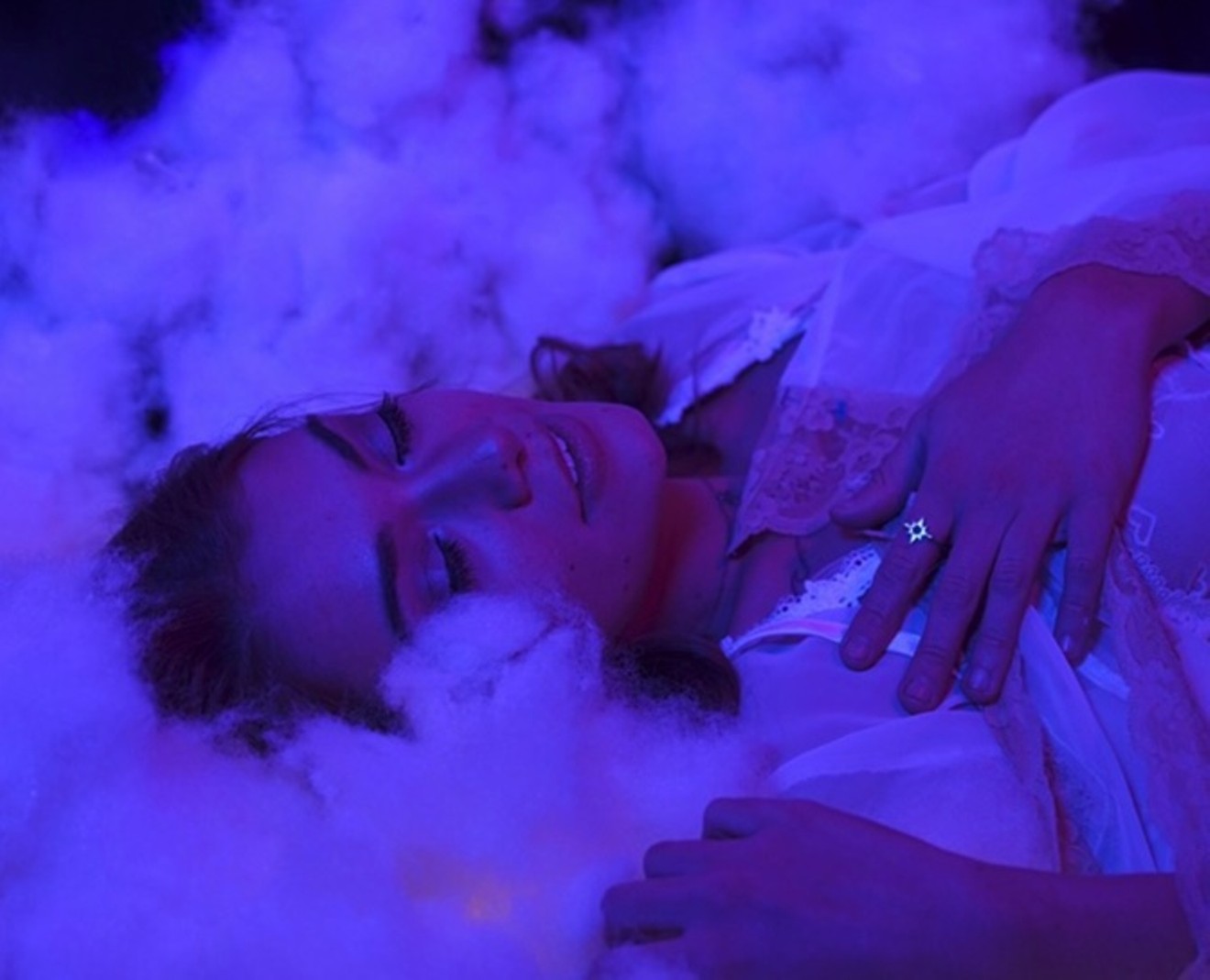 Grace DeVine has released her second EP, Midnight Blue. Kaitlin McMullen
Grace DeVine was born, or perhaps reborn, in the bathtub. The year was 2019, and while the 24-year-old singer-songwriter had been musically inclined her whole life, she wasn't sure what the next step toward a solo career would be.

"I was in the bathtub one night, and I was thinking about Beyoncé and Sasha Fierce. I was in a really bad writing rut, not really sure what to do musically," DeVine recalls. "So I was like, 'What if I start with a stage name? Okay, one, two, three' — put my head underwater and came back up, and I just had the idea. Bathtubs, I'm telling you, are catalysts for ideas in your brain."

Two years down the line, she has just released her second EP as Grace DeVine, titled Midnight Blue.

Raised in Florida by two moms, one a former Grateful Dead roadie, DeVine grew up with music as a driving force in her life. "There was always music playing, and it wasn't ever passive," she says of her childhood home. "We were always discussing it, or my mom was telling me the lyrics ahead of time so we could sing along." She found solace in conjuring melodies on the family piano, picked up the guitar at eight years old, and when she received a book of Bob Dylan lyrics for her thirteenth birthday, began writing her own songs.

DeVine's music-loving mothers introduced her to a wide variety of music, and she fell in love with all of it. "I like everything, really. People say they like all kinds of music, and they won't, but I really do. And I try to listen to everything, because music is this web, and all of the genres are intertwined," she says. She counts indie darlings like St. Vincent, Lorde and Caroline Rose among her influences, but without question, her first love is disco. From the classics like the Bee Gees and Earth Wind & Fire to modern-day disco revivalists like Kim Petras and Dua Lipa, DeVine is a disco fanatic. On Midnight Blue, DeVine's dreamy vocals are supported by a backbone of hard-hitting beats.
Kaitlin McMullen

Given her deep appreciation for all genres of music, DeVine, who came to Colorado to attend the University of Colorado Denver (she graduated this past May), dabbled in multiple musical projects before striking out on her own.

"I wanted to feel more in control of what I was making," she says, "because your work is your life when you're a creative. So I just started producing my own music, and I didn't want to have to rely on anyone, like some mediocre white dude, to be reading my mind."

These days, songwriting is mostly a solitary process for DeVine. "Sometimes I just have ideas, or a little melody will pop into my head, and I'll just try and write it as soon as it comes. With 'Sleep Deprived,' I woke up from a dream, and I was making eggs, singing a loose melody, and I was like, 'I heard that in my dream. That was a good song.' And then I was like, 'Holy shit, I wrote a song in my dream,'" she says. "I try to write a song every other day, even if it sucks and I hate it."

DeVine released her second EP, Midnight Blue, as a followup to her 2020 debut EP, Love Letters to the Moon. Each of the three tracks was inspired by a specific era in music, with modern twists. "'Sleep Deprived' is like my love for ’70s disco — like I want to roller-skate to it," she says. "With 'Midnight Blue,' you get that modern-day bass and drums, but when the guitar comes in, it's like ’80s hair rock. I wouldn't say 'I Just Can't Stop' is necessarily ’80s-esque, but it's still pretty darn groovy."

While DeVine does all her own producing and plays keys, synths, guitar and bass, she sometimes brings in other musicians to nail down the perfect sound. "Sometimes I'll hire out a musician, if there's a guitar part that I want that I'm not skilled enough to play or I would rather hire someone as a service to do it. Circulate the music economy — why not?" she says.

DeVine's favorite things are music, the moon and her cat, Stevie.
Kaitlin McMullen
"On the EP, my good friend Mitchell Gardner, who's from this band called Fresh Fruit, plays guitar on 'Sleep Deprived,' and what I had him do was just kind of play something funky the whole way through, and then I would chop it up and arrange it," she says. "For 'Midnight Blue,' my friend Ben Dubois, who lives in Austin, played guitar on that. It hits so hard!" But perhaps the most special collaboration was on the third track, "I Just Can't Stop (Loving You)," with DeVine's friend Ronan Andrews, who is also part of Fresh Fruit. The duet is pure magic.

"He is my favorite person to co-write with, without a doubt," she says of Andrews. "He's such a talented songwriter. This is our first released collab, but we've been friends for four or five years now. He graduated from CU Denver at the same time as [I graduated]. That's how it works with musicians: We're all friends with musicians. It's a community."

Midnight Blue packs a harder punch than Love Letters to the Moon, but without sacrificing any of the upbeat, ethereal sound that listeners expect from DeVine.

"I think this new EP is a lot more mature. It's a lot more sophisticated in the arrangements; the instrumentation is a little more complex," she says. "I think it definitely has more of that disco element. We move more toward disco and hard-hitting beats, and away from dreamy bedroom pop."

Inspired by the multi-layered vocals of artists like Queen and Lorde, DeVine experimented with sounds to add a dramatic flair to the EP, using recordings of lion's roars or of herself whispering choruses. "In the last EP, there wasn't a lot of vocal-centric stuff, but with this EP, each song has four-plus vocal layers," she says.

According to DeVine, this is her best release yet: "I'm really proud of this EP, honestly. Sometimes when I listen to my music after it's released, I'm like, 'Ugh.' It feels like looking at middle school pictures. But this feels really good." As someone who identifies as pansexual, DeVine tries to approach her music the same way she approaches potential romantic partners. "I like to take each song for what it is and love it for what it is, whatever genre I think it might fit into, and that's how I am with people, too," she explains. "I try not to generalize who I'd be into or write anyone off too quickly. I'm musically pansexual, too."

DeVine is already working on her next EP, which she's thinking will be a sunnier version of her sound. "I'm thinking — but don't hold me to it — something a little more tropical-influenced. I'm not saying I'm going to make calypso music, although honestly, calypso is one of my favorite genres. And I'm from Florida, so it reminds me of home," she says. "I have a lot more songs written that are a lot more personal and I think will probably be still very vocal-centric for that dreaminess, with some guitar. I want my music to be fun, but I also want it to be a song someone can listen to when they're going through something and don't know what to put on." Until then, we'll be blasting her retro-made-new hits from Midnight Blue.

Midnight Blue is available for streaming and download now on all music platforms.
KEEP WESTWORD FREE... Since we started Westword, it has been defined as the free, independent voice of Denver, and we'd like to keep it that way. With local media under siege, it's more important than ever for us to rally support behind funding our local journalism. You can help by participating in our "I Support" program, allowing us to keep offering readers access to our incisive coverage of local news, food and culture with no paywalls.
Make a one-time donation today for as little as $1.