Denver Is Catching Up to 50 Cent's Love for Greeley Rapper Sauce.K 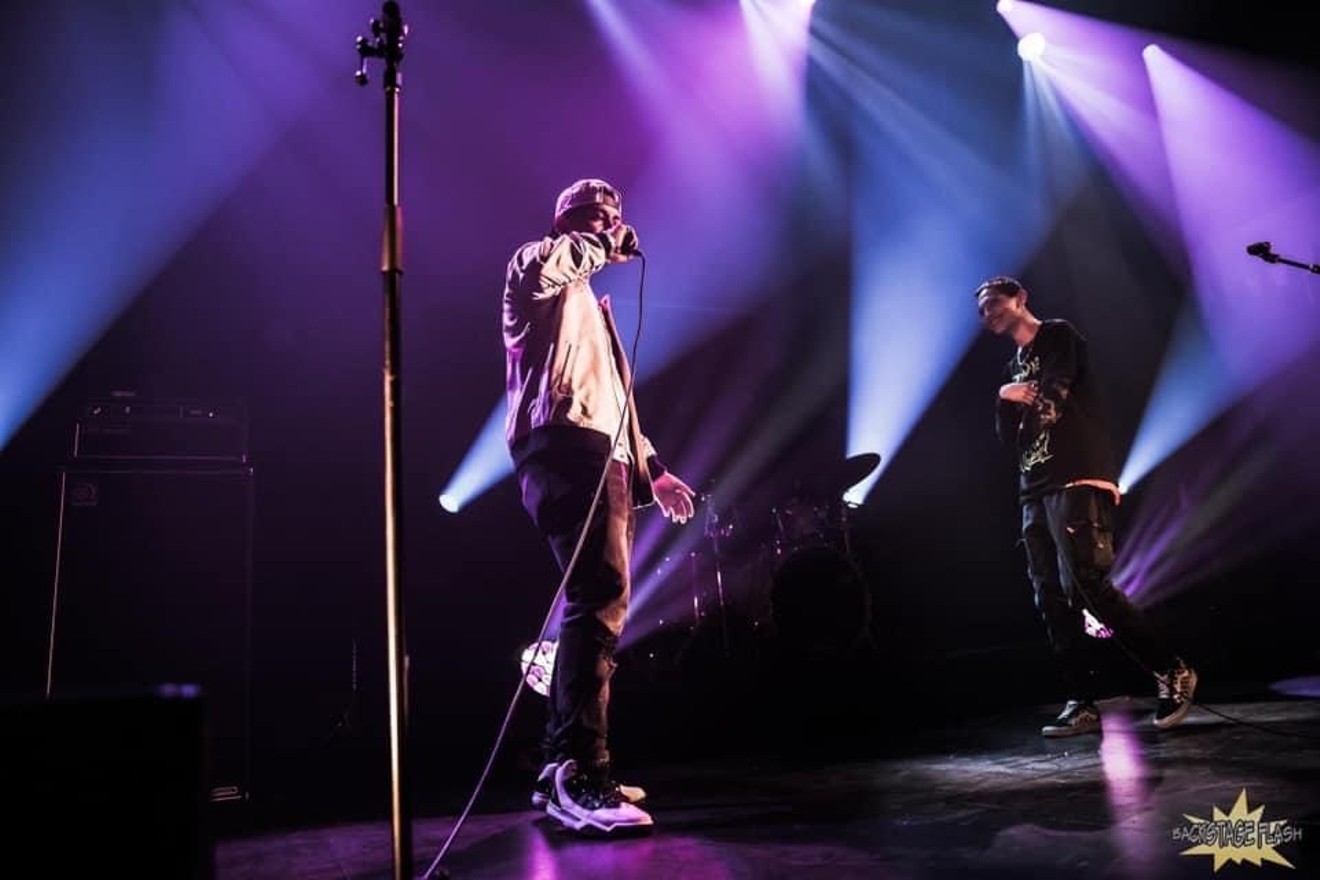 Rapper Sauce.K (left), born D'Angelo Garza, is a Greeley native. BackstageFlash
D'Angelo Garza, who goes by the stage name Sauce.K, has been writing lyrics since he was in the fourth grade. When he was growing up in Greeley, his fellow students teased him for his efforts to make music, bombarding him with negativity anytime he tried to share his lyrics or beats. "I would ask kids my age, 'Hey, what do you think of this?,' and right off the bat, it was just so negative," he recalls. "I always got negative feedback, and I had anxiety, so it took a lot of courage to even ask someone, just to get shut down."

But Garza, now 22, had teachers who encouraged him to pursue his passion for music despite the taunting. "My teacher Mr. Davis would tell me all the time, 'Mental health is a serious thing, no matter what age you are.' Mental health is something that a lot of people can't really deal with alone, so he said music is a good way to cope with that," Garza says. "He said, 'Put your emotions in a song, and then if you have people who deal with the same issues as you, they'll understand you and connect with you.' So that's what I did, and I started taking it more seriously."

Garza got the last laugh: He's since won numerous awards for his music, has been showcased on several national hip-hop blogs, recently released his first album, 88, and has a deluxe version on the way.

He began producing music at sixteen, but it took another few years for him to build up the nerve to start rapping the lyrics he wrote. His friend and collaborator Izzy Belabid was the one who eventually convinced Garza to record his own vocals. Belabid, a native of the Netherlands who had been producing since he was nine, reached out to Garza over social media in 2016 to share beats.

"We connected like that," Garza says, "and then when I was nineteen, I was like, 'Hey, bro, we've been producing beats for a long time. We should try and make a track together.' He was like, 'You should try rapping.' So we collaborated on a song called 'You Want,' and within a week, it got like 10,000 listens on Spotify."

"You Want" blew up in the Netherlands, where English-language rap is popular. The song caught the eye of one particular rap legend, whose approval launched Garza into the public eye.

"50 Cent's manager reached out to me on Instagram, saying that he wanted me to be in this article where 50 Cent was picking out an artist from every state to promote. He put me on their website [ThisIs50], and from there I just took off. I was so excited that it really motivated me. Like, damn, why didn't I drop music sooner?" says Garza. "Journalists from New York, Chicago, Texas, California were getting ahold of me. I was like, 'Is this legit?' I didn't expect that to happen. No one really knew me here, and then I got a bunch of publicity in a short amount of time from that one song."

Once he had been showcased in the likes of The Hype magazine and XXL, radio stations, blogs and magazines in Colorado began to take notice. In 2020, Garza became the first hip-hop artist to win the Greeley Tribune's Best Musician of Greeley award, and took the title again in 2021. He won 105.5 FM's Listeners' Choice Award, and was named one of the top eight musicians under 22 in 2021 by Sonic Spotlight, a northern Colorado music showcase and competition. Earlier this year, he was the youngest person on NoCo Style magazine's 30 Under 30 list. Plus, he's been awarded multiple plaques by the Music Streaming Awards: one when his first EP, Bad Habits, hit 250,000 streams; one each for "Envy" and "No Options," two singles that have had more than 100,000 streams; and, most recently, a plaque for 500,000 lifetime streams. 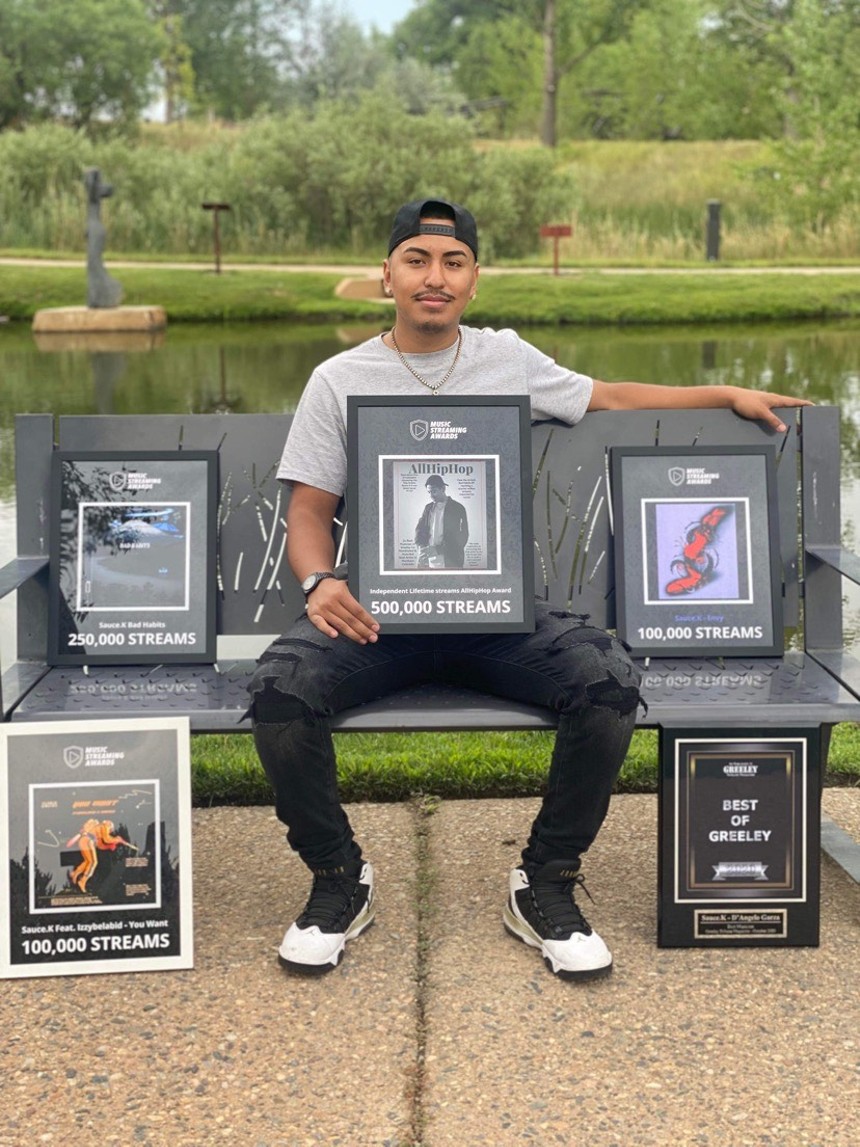 Garza shows off the plaques he's received from the Music Streaming Awards.
Jesus Alex Arreola
However, the more external affirmation Garza received, the more vocal his critics became. "Once I hit 1,000 Spotify listeners a month, I got a lot more hate...where I'm from," he says of his reception in Greeley. "A lot of people see you doing good and they get really envious. I had people saying I was a fraud, I had people saying I was buying streams — just anything to make me look bad."

The animosity started to take its toll on Garza: "Eventually it got to me, and I kind of had a mental breakdown. I deleted all of my social media and just kept telling myself, 'Maybe they're right.' But my grandpa always told me, 'No matter how big you get, you'll always have hate, and if there are people hating you, you're obviously doing something.' I thought about that deeply, and that motivated me to keep going."

Garza reaffirmed his commitment to music by dropping his second project, 88, this past July. He and his friend King Kxmi (born Samuel Hammer), who produced several beats on the album, decided to call the project 88 because of the numerological associations with rising above or ascending. "The reason why we chose 88 is because there's this group with Rich Brian, his label group, called 88Rising. In our point of view, we were rising up, and we researched the number, and it means elevating," he explains.

On 88, Garza continues to use music as a way to process his anxiety and depression, especially with the track "Good Intentions." "When I wrote that song, I was going through a sad time. My best friend had passed away, and I was really going through it. I kind of shut myself away from everyone and was just in my zone, writing down lyrics. That's a way that I cope with my emotions," he says. "So 'Bad Habits' turned to 'Good Intentions.'"

He made sure to include a message for his detractors on the album with "Envy." "That song is my emotions talking about Greeley, basically," he acknowledges. "They publicly go around hating people, just dissing me to gain publicity for themselves, but we grew up in the same city and should be supporting each other. I've had a lot of fake friends, people from elementary school and middle school who saw me doing well and were like, 'Hey, bro, let's get on a track' — but they never talked to me until they saw me doing good. A lot of people did that."

But he has found some fellow northern Colorado artists who do support his journey, including Stunno, who's included on his track "Dmt P.2." Says Garza: "Stunno, he's from Greeley. He's a really good artist, and a really humble artist. I want to give him that recognition because he deserves that. He respected me when I started making music, and was one of the few people saying congrats. He's become a friend." Garza is just starting to get comfortable with live performances.
Jesus Alex Arreola

Now that he's found his groove, Garza is also looking to do more live performances. After scoring his first gig through Sonic Spotlight, he feels much more comfortable being on stage.

"My anxiety in front of a crowd was shutting me out from performing, but the Sonic Spotlight team in Fort Collins had me do my first show at Washington's, and that helped me break the ice. I had that fear like, 'What if I perform and the crowd isn't feeling it?' But once I performed and the energy I was sending out started bouncing back to me and the crowd started hyping me up, I was like, 'Okay, now I feel comfortable,'" he says.

Garza recently did his first show in Denver, at Your Mom's House, where he teased two unreleased songs that will appear on the upcoming deluxe version of 88. With guest verses from several other northern Colorado musicians, the new iteration will have ten additional songs. "I have a lot of unreleased tracks, and I performed two at the Denver show, and people were getting really hyped up," says Garza. "So I was like, 'You know what? I have to release them.' It's a great feeling."

88 is out now on all music platforms. Follow Sauce.K on Instagram for updates about his forthcoming deluxe album.
KEEP WESTWORD FREE... Since we started Westword, it has been defined as the free, independent voice of Denver, and we'd like to keep it that way. With local media under siege, it's more important than ever for us to rally support behind funding our local journalism. You can help by participating in our "I Support" program, allowing us to keep offering readers access to our incisive coverage of local news, food and culture with no paywalls.
Make a one-time donation today for as little as $1.