Hakeem Furious Lost Everything, and Now He's Giving Back Andre Carbonell, aka Hakeem Furious, was born in Commerce City; he became a ward of the state at the age of five. Matt Money
When Andre Carbonell was five years old, his father strangled his mother to death.

Everything changed for the Denver poet and rapper, who performs under the name Hakeem Furious. Carbonell's father went to jail; he and his younger brother, who had spent their early years in Commerce City, became wards of the state and spent a brief period of time in the foster-care system. Eventually, the state was able to grant guardianship to other relatives. Carbonell went to live with his grandparents in the mountains between Boulder and Longmont, and his younger brother lived with their aunt and uncle.

When Carbonell was eleven, his grandfather passed away, so he moved with his grandmother to Jacksonville, Florida, to be closer to family. Later on, he attended Florida A&M University in Tallahassee and traveled between Colorado and Florida for a couple of years before moving back to Denver in 2017.

“Luckily, the courts, they mandated that we go to therapy,” Carbonell says. “I was in therapy for like eight or nine years. I feel like I came out relatively okay. But it was important. Kids who go through the foster-care system and are living with foster parents or anyone really living with anyone who is not their parents and feel like they’re missing a part of themselves — I feel like art is a good outlet.”

This Friday, he'll perform at the Sky’s the Limit Foster Care Awareness Showcase. The evening will showcase performances from local artists, including local rapper DNA Picasso and Carbonell’s own hip-hop collective, Cap 6 from Tallahassee, Florida. Carbonell will perform his poem “Cartoons and Cereal (Reprise).” The poem was written in 2014 and deals with the challenges he experienced during childhood, growing up without parents.

“It was my first attempt to write anything about the situation outside of therapy,” he says. “I still have some healing to do, but since I wrote the poem, I have reconnected with my father and [am trying] to move forward from the past.”


The poem was inspired by the intro to Kendrick Lamar’s song “Cartoons and Cereal.” Lamar's lyrics resonated with Carbonell's own experience, and he used a similar intro in his own poem: “I was raised in a sandbox, next to you and her. You were holding a handgun, she was giving birth to a baby just like me."

As for the poem, "I felt like it encompassed my innocence as a child in that moment and the gravity of the relationship between my parents,” he explains.

The poem continues: “I woke up in the morning and seen you on the news. Looked in the mirror and realized I have something to prove."

He says, "This reminded me of when the police arrested my father from out [of our] Commerce City home, and it was all over the news. Since then I’ve known that I can’t follow those same footsteps.”

Other lines in Carbonell’s poem address how he wants to confront the past in order to create a better future for himself, like: “For some time now I notice that my progression is teetering on a silver line of my past and my potential” and “Dear father, this is not for pent-up feelings or cheap shots of agony. I am your seed, and I’m finally becoming the man I need to be.” 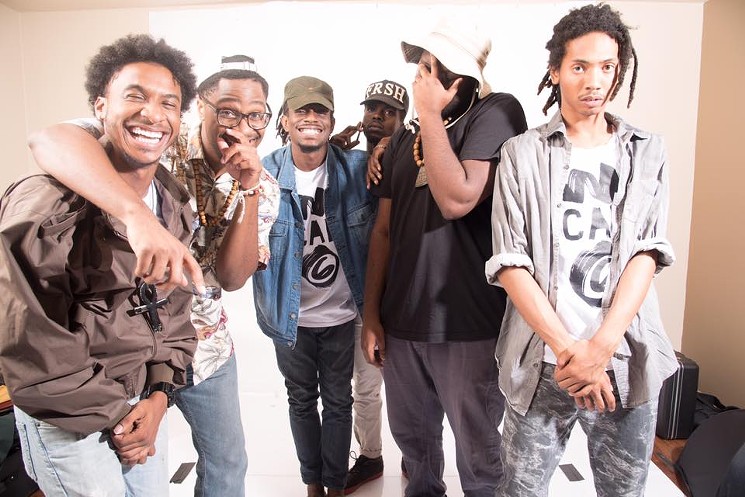 Andre Carbonell also performs with hip-hop collective Cap 6, which originated in Tallahassee, Florida.
3rd Eye Photography
Outside of performing as Hakeem Furious, Carbonell works as a cultural organizer, creating space for local artists to express themselves. Cap 6 focuses on performing for youth, in schools or sometimes at festivals. Ultimately, he wants to spread a message of empowerment in his art, and he describes Cap 6’s music as “for the kids.”

“I am a survivor,” he says. “It is common that a lot of students are affected by childhood traumas, and a lot of my adult friends, for that matter. If I can help students find outlets that move them to heal and strive past their adversities, then I’m doing the work I need to be doing. I feel like both Cap 6 and myself try to incorporate that positivity and vulnerability into our music, to help relate to the listener and motivate them to keep going.”

For the members of Cap 6, music is medicine, and that belief is a motivating factor in their creative work, together and as individual artists, explains Carbonell.

"Music is medicine, and that's one thing we really believe," he says. "It's a healing and spiritual practice. And that exchange on stage — that's why we perform. That's why we do everything that we do."

Hakeem Furious and Cap 6 at the Sky's the Limit Foster Care Awareness Showcase, 5 p.m. Friday, May 25, McNichols Building, 144 West Colfax Avenue, 720-865-5550, $20-$30.
KEEP WESTWORD FREE... Since we started Westword, it has been defined as the free, independent voice of Denver, and we'd like to keep it that way. With local media under siege, it's more important than ever for us to rally support behind funding our local journalism. You can help by participating in our "I Support" program, allowing us to keep offering readers access to our incisive coverage of local news, food and culture with no paywalls.
Make a one-time donation today for as little as $1.