“The whole record is based on that feeling of drowning, [and] then, eventually, getting over that fear, metaphorically,” says the Denver band's vocalist and guitarist Stephan Pamas.

But little did he know when he wrote the lyrics that the band would work through, self-record and produce the songs during a pandemic. The resulting album brings together an amalgamation of sounds, techniques and tones that reflect a year of processing.

Over the months, Hello, Mountain’s songs transformed from the traditional rock instrumentation of its previous three releases into electric renditions. The change was part of the ongoing evolution of the band’s sound. The group's initial albums, 2016's Enigma and 2019's Machine had a pop-punk drive; then 2019's Transcend embraced a more easy-listening indie-rock style, and Swim toes the line between different genres.

The bandmates credit some of the transformation on Swim to the time and creative freedom they gained by producing the album themselves.

“The past few records felt rushed. We would run out of money in the studio, and we had no time left to be creative,” says bassist Jack Falk. “So we just decided to record this one ourselves to remove those limitations.”

“I’ve been producing demos since 2014," Pamas adds. "I just hadn’t taken that leap to be confident and do that all ourselves. That was a bit scary."
click to enlarge 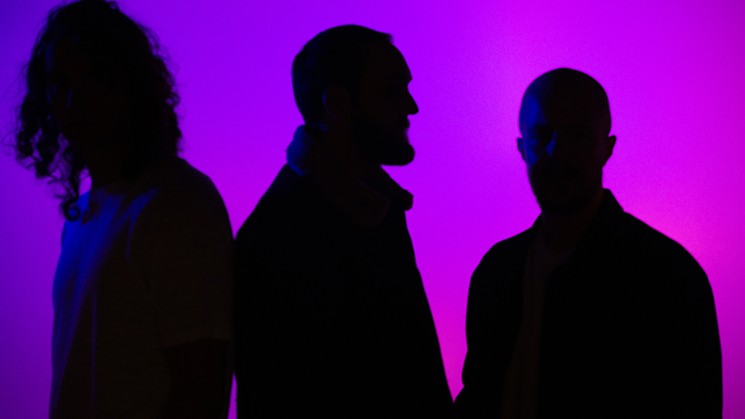 Swim is the first project Hello, Mountain produced itself.
Hello, Mountain
The band hopes its new sound will surprise audiences, Falk says. The album is meant to reflect a recorded version of the band that is distinct from its live performances. The production world is an entirely different kind of instrument, Pamas adds.

At the beginning of the pandemic, the three bandmates honed their production skills as a form of quarantine entertainment. They participated in an Instagram group called the Stay at Home Audio Club where seven-second samples were posted for participants to turn into songs. Despite the same sample, each artist created a very different song, Falk says. They found it inspiring.

Pamas, Falk and Patrick Smith (drums, synth, backing vocals) explain that they all draw from different influences that range from pop-punk, R&B, classic rock, indie rock, Motown, metal and modern hip-hop. This album was a chance for them to meld those varied sounds together into a coherent story. Swim is also the first time the three have been in the studio together, as Smith joined the band in late 2019.

Nevertheless, Pamas did the bulk of the production.

“I definitely got too deep into it at some points,” Pamas says. The production required a different headspace, and even though the days of the pandemic provided extended periods to work on the project, he found it important to sometimes walk away. Hello, Mountain's new sound emerged during the pandemic.
Hello, Mountain
Pamas worked on the songs in a way that’s reminiscent of the theme of the album. “There are periods of time in everyone’s life when they feel there’s no way out, but at some point, you do get out,” he says. In the album, that feeling is symbolized through the motif of drowning. “You can be so vulnerable underwater. You're close to death in a way, but there is always an escape. That escape just happens to be to do nothing, and just wait till you float to the surface. But when you panic, you tend to get into trouble,” he explains.

“We’d catch him giving too much focus to something that’s too minimal,” Falk says. Both he and Smith were able to provide a somewhat objective perspective on the process and help navigate difficult decisions. “The creative control was worth putting in that time and effort,” Smith adds.

Such creative dialogue between band members is essential to their dynamic. Pamas explains that exchanges can get heated between band members — but in a good way. It pushes them to grow and allows them to experiment with ideas that ultimately leave them all feeling satisfied with the project. “We try to keep an open environment,” he notes.

And they’re not done learning yet. The June 18 release marks the end of the production of this album, but the bandmates are itching to get started on something new.

Swim is available for streaming on all digital platforms and purchase on iTunes and Bandcamp. The vinyl edition can be purchased through Hello, Mountain's website, Bandcamp or by contacting the group directly through Instagram or Facebook. Hello, Mountain plays at Lost Lake on July 29.
KEEP WESTWORD FREE... Since we started Westword, it has been defined as the free, independent voice of Denver, and we'd like to keep it that way. With local media under siege, it's more important than ever for us to rally support behind funding our local journalism. You can help by participating in our "I Support" program, allowing us to keep offering readers access to our incisive coverage of local news, food and culture with no paywalls.
Make a one-time donation today for as little as $1.
Claire Duncombe is a Denver-based freelance writer who covers the environment, agriculture, food, music, the arts and other subjects.
Contact: Claire Duncombe