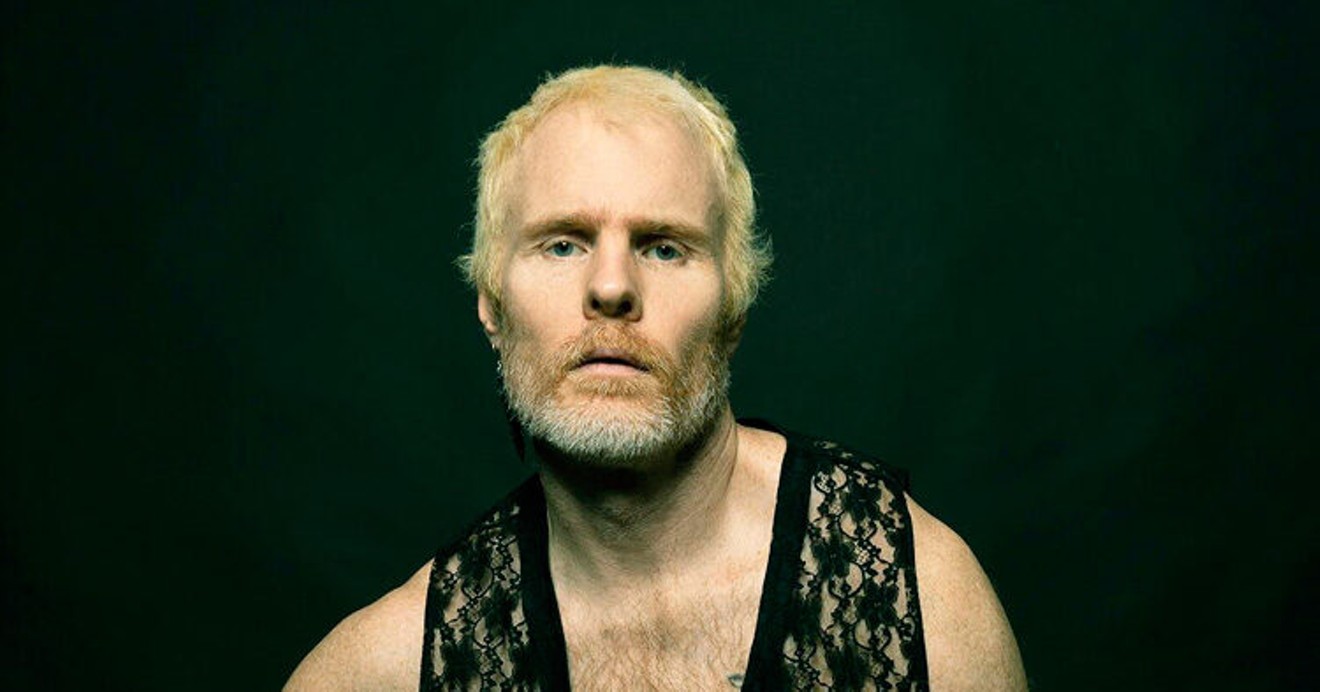 Andy Butler of Hercules and Love Affair Niki Moens
Years before Andy Butler became the internationally lauded nu-disco artist Hercules and Love Affair, he had his first DJ gig in Denver. It was at the late lesbian bar the Denver Detour, with proceedings hosted by a drag queen dubbed Chocolate Thunderpussy, and Butler was just fifteen years old. Sometime during that inaugural night, the police showed up.

“I had to be taken to the bathroom and kept in a stall; I was freaking out, of course,” remembers Butler. “And Samantha [Thunderpussy] was like, ‘Child, just sit still. It's fine. They'll be out of here soon.’”

Eventually, the cops left, leaving Butler with the first taste of a career that would garner record deals with both Atlantic and DFA.

Butler admits he was a handful growing up. After nights like that first gig, he would show up at Regis Jesuit High School delirious from the debauchery of Denver’s queer underground — a scene that’s a far cry from the values of Catholic school. “Being out at an all-boys' Catholic high school was an intense thing to navigate,” he says. “I played football for the two years I was there, and in the second year, I came out and was still on the football team.”

Despite the vulnerability that comes with being gay on a Jesuit football team, everything wasn't completely as it seemed at this bastion of social conservatism. “After I left [to go to Colorado Academy], I heard through the grapevine that other athletes were sticking up for me, as bad things were being said about me,” recalls Butler. He believes this surprisingly liberal attitude in a school known for its orthodox views was drawn from Denver’s progressive attitude toward sexuality at the time.

Butler cites Amendment 2, a discriminatory law approved by Colorado voters in 1992. Denver, Boulder and Aspen had enacted anti-discrimination laws with regard to sexual orientation; in response, the socially conservative Colorado for Family Values drafted Amendment 2, which would prevent municipalities from enacting such anti-discriminatory legislation. While the measure never fully took effect, as the Colorado Supreme Court issued a preliminary injunction, activists in Denver and other cities responded by boycotting Colorado tourism, an effort that gained nationwide support and cost the industry tens of millions of dollars. Amendment 2 eventually made its way to the U.S. Supreme Court, which deemed it unconstitutional.

Having grown up in a conservative household, Butler worried about how his family would react when he finally came out. “When the LGBTQ+ community decides to make that big decision and starts talking about what's going on with them, it's not just a big thing for them — it impacts many lives,” says Butler. “Families change, people's perceptions change.” When he finally came out to his family, there was initially fear and a bit of confusion about his identity. However, this was quickly followed by acceptance, love and support, he says.

But despite Denver's progressive ideals, Butler remembers it was still a dyed-in-the-wool place where many youth identified as skinheads. He had to be cautious about those he associated with, and found community in raves and nightclubs. “My friends and I would often talk about nightclubs and the utopian sort of idea [around them],” says Butler. “You know, in my house, all are considered equal: Black, white, gay, straight, woman, man.”

He recalls the nightclub and rave scene in ’90s Denver as a vibrant one. He says it was a weird, special moment in the city, where one could go out on a Monday or Tuesday to massive raves and go to smaller, underground parties on the weekend. He remembers that seminal DJs such as Mark Farina, Derrick Carter and the Wicked Sound System made frequent stops here. “We were spoiled back then,” he reminiscences. “You'd say, ‘Dub Tribe [Sound System] is in town again, for the second time this year.'"

One person he credits especially in the scene is Denver DJ Craig C, who would play on Tuesdays at the Compound on Broadway. “It was a totally weird night and such a cool, diverse place,” Butler says. “He really introduced a lot of house music into Denver — like proper New York garage, proper Masters at Work stuff.”

But it wasn’t only in Denver’s house-music scene that Butler found refuge. As a goth, queer teen, he would frequently visit establishments such as Muddy’s Cafe, Paris on the Platte, St. Mark's Coffeehouse, Cafe Euphrates and Rock Island, which all shaped his musical landscape. It was at an all-ages event at Rock Island that he got his first taste of proto-rave music such as Lords of Acid, Front 242 and Nitzer Ebb.

Butler eventually left Denver for New York City, where he bonded with future Mercury Prize-winning vocalist ANOHNI over their shared appreciation for art and music. At some point around 2003, they collaborated on the seminal nu-disco anthem “Blind.” However, it wasn’t until five years after it was recorded that it was released on James Murphy of LCD Soundsystem’s DFA label, where it skyrocketed up the U.K. charts, becoming a Top 40 hit. To this day, the track's walking disco bass line, androgynous vocals and conga-laden groove is a staple in DJ sets around the globe.

The Hercules and Love Affair band consists of a rotating cast of musicians, with Butler being the primary member. He chose his name because of his love for Greek mythology — specifically, the affair between Hercules and his boy lover, Hylas. As he told the New York Times in 2008, "[Hercules] stayed on the island, looking for his boyfriend. I just thought this was super beautiful: the strongest man on earth looking for his lost love, at his most vulnerable. Strong men can have strong feelings. And they can experience those feelings and experience pain and express pain — and be gay."

Butler teamed back up with ANOHNI, as well as Siouxsie and the Banshees drummer Budgie, for his new album, In Amber. The record is a shift away from the glitz of “Blind"; on it, Butler reconciles his past trauma by pulling from the more melancholic sounds of his youth. “[With this album], I was sort of bringing myself back musically to being thirteen and fourteen years old, listening to the Cocteau Twins with my window open in the middle of December, freezing cold, writing in my journal about how sad I was,” recalls Butler. “So does this album reflect my youth in Denver? It absolutely does, because before I got involved in the queer subcultures of house music, the best, safest, most expressive places were those goth, darker punk spaces.”

Butler also sees In Amber as a way to show his audience that he’s unrestricted from the rigid definitions of dance music. “I made this new album to assert myself in such a way where I don't have any limitations,” declares Butler. “People might want to define it, but as an artist and musician, I feel happier that I've taken as many risks as I have.”

While he’s far from the despondent teen that he was growing up in the Denver suburbs, he feels that the new record is especially therapeutic. “There's just so much to reflect on and so much to process that's heaped upon us, which often brings me to a place where I want to use music to process stuff,” he concludes. “But, yeah, there are still a few uplifting numbers.”

In Amber comes out on Friday, June 17, on all platforms. The vinyl is available on Rough Trade.
KEEP WESTWORD FREE... Since we started Westword, it has been defined as the free, independent voice of Denver, and we'd like to keep it that way. With local media under siege, it's more important than ever for us to rally support behind funding our local journalism. You can help by participating in our "I Support" program, allowing us to keep offering readers access to our incisive coverage of local news, food and culture with no paywalls.
Make a one-time donation today for as little as $1.