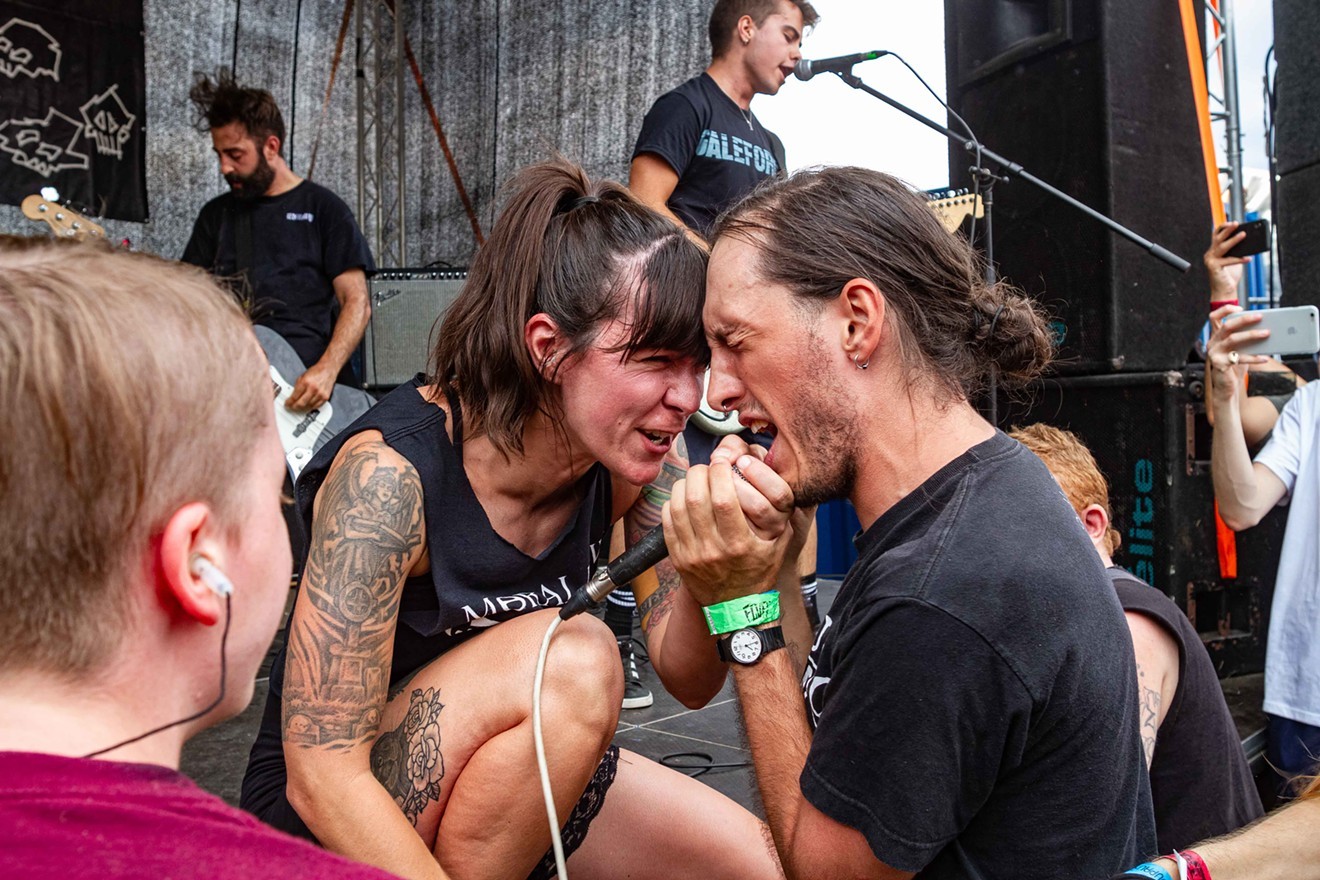 Denver’s FAIM, with lead singer Kat Lanzillo (left), is one band that DIY label Convulse Records has worked with over the years. Courtesy Stefano Marrota
Musician Adam Croft never planned to start his own record label. As a member of three bands — Destiny Bond, Euth and Product Lust — he was more focused on touring and going to school at the University of Wyoming in Laramie. Then an opportunity presented itself in 2018.

“I came into what, to most people, would be an amount of money that belongs in your savings account. But to me, it was enough to make me feel rich,” he says. “I [realized] I can put out records with these thousands of dollars that I have. So I decided to start putting out records — mostly just seven-inches and tapes for friends while I was living in Laramie. I did a couple of small releases there.”

What began as an effort to support his peers became Convulse Records, a DIY punk/hardcore label. Croft relocated to Denver from Laramie as the label started to gain momentum in 2019, releasing music by underground punk and hardcore bands — genres that other labels didn't consider marketable. But Croft didn’t care about that. Growing up in “the middle of nowhere” (Sundance, Wyoming), he had plugged himself into the area’s DIY circuit, regularly traveling to Rapid City, South Dakota, and Gillette, Wyoming, for shows. He remembers the moment that he decided to dedicate himself to the scene.

“I was sixteen — the day I got my driver’s license. Converge played a day-off show at a Knights of Columbus hall, and they were my favorite band at that point,” he says. “I can’t really think of any specifics, but I remember driving home from that and thinking, 'I’m going to be in rooms like this for the rest of my life. This is where I’ll die.' That’s kind of why I’m still doing it.”

Croft’s passion for the music is infectious and genuine, and he’ll be the first to admit that he’s just as much a fan as anything else. But being a road dog musician with a DIY ethos gives Croft his credibility, too. He’s never shied away from the dirty work, from booking shows to mailing merch orders himself.

“You can be in the middle of fucking nowhere and find someone with the right T-shirt, and all of a sudden you can build things that last forever. It makes the work seem worth it. Booking shows in Laramie, Wyoming, where you have to load in your PA to some fucking dog-shit bar, is the kind of thing that makes you appreciate being in a place like Denver. There’s just already this community, ready to go,” he says.

Despite its popularity in underground circles nearly five years later, Convulse isn’t necessarily a lucrative endeavor, Croft concedes, but that’s never been his goal. And the community in the Mile High City continues to embrace and support his efforts.

“It’s just been going and building ever since. Everything still happens out of my apartment and a storage unit in Denver,” he notes. “We’ve got a big volunteer team now. There’s five or six people at any given time that are all involved in helping run it — the shows we book and the mail-order operation and distribution. But it’s still just a DIY hardcore and punk label that’s mostly just a bunch of boxes in my apartment and a storage unit.”

Convulse has around forty releases under its belt, including seminal releases from local bands including FAIM, Candy Apple and Public Opinion. In 2024, that number will creep into the sixties, given the label’s current release schedule. Where it goes from there, Croft isn’t exactly sure.

“We’re transitioning into trying to grow the label through more substantial releases, like touchstone releases for the bands and the label,” he says, adding that when the label started, he simply wanted to release a seven-inch and recoup some money.

“Then there just kept being things that I wanted to put out," he continues. "I think the goal now is a mix of that and community stuff, like getting more volunteers involved, teaching some of the younger kids in our scene what goes into putting out a record, so it’s demystified and it’s a thing that people can just go do.”

FAIM was one of the first bands Convulse worked with outside of Croft’s own acts. The three-piece fronted by Kat Lanzillo proudly dubs its music “the soundtrack to jumping your local Nazi,” and has always made a point to call out injustices and abuse against women within the scene. Lanzillo appreciates Croft’s willingness to promote the band and its message.

When Lanzillo first moved to Denver in 2015 after more than a decade in the hyper-masculine Boston hardcore scene, she found a tribe that was more welcoming, albeit still male-dominated. Once FAIM formed in 2016, her focus was to promote more representation. She and Croft have had “some pretty serious conversations” about it, too. While there’s still room to include more diverse voices, Lanzillo says, “Denver is extremely welcoming” at the moment.

“It’s just so interesting how it’s such a short timeline. It feels like it was a really long time ago because of how quickly Convulse has blown up,” she adds. “Part of that is Adam just putting out weird bands. It’s not about putting out the coolest bands. He’s made it so that hardcore can be this weirdo place.”

This isn’t necessarily the first DIY scene to thrive. The subgenre originally burgeoned on the coasts in places such as San Francisco and Washington, D.C., where bands like Bad Brains, Black Flag, Dead Kennedys and Agent Orange were releasing their own music. But the scene and bands were mostly bound to their geographic posts during their heyday in the ’80s. Social media has now eliminated those barriers, so places such as Denver — and labels like Convulse — can birth a national underground movement.

Denver band Public Opinion started in Seattle before catching wind of the work Croft was doing with Convulse and settling here a year ago. “It’s really fulfilling that I’m able to write the songs, book the shows and then drive the van and have Convulse put the record out,” says vocalist/guitarist Kevin Hart. "It keeps the whole thing going."

And Hart appreciates Croft’s vision and elbow grease. “As an older member of [the] community now that I live here, watching how he passes the torch to the younger kids is very exciting," Hart says. "Kids that want to start their own bands and make their own fliers and put on their own shows and make their own zines — all sorts of stuff.”

Tristan Sagar, frontman and guitarist for Denver’s Candy Apple, grew up going to shows and playing in bands throughout the city. He also remembers how most touring bands would skip the Mile High City on their way to or from the West Coast. But being snubbed actually made the DIY scene stronger, he believes.

“The scene in Denver has always been unique,” Sagar says. “It’s self-contained. If you want to see music, you've got to do it yourself.”

Croft invites anyone who has a passing interest in hardcore or punk music to come out to a show or support a local band by buying a release — or even to start a new band and put out a demo. It’s all theirs for the taking, he says.

“I’m willing to embrace that I’m still just that dork looking for a room with a bunch of people that care about the same stupid shit I do. That’s the spirit of Convulse. It’s as much about the rooms as it is the records, and creating spaces where we can be together and find meaning in this thing,” Croft concludes. “For what it’s worth, our little corner of hardcore and punk is really trying to be inviting. I feel on some level that if I didn’t have this in my life, it would be really different, and I hope more people get to have this.”

For more information, visit convulserecords.com.
KEEP WESTWORD FREE... Since we started Westword, it has been defined as the free, independent voice of Denver, and we'd like to keep it that way. With local media under siege, it's more important than ever for us to rally support behind funding our local journalism. You can help by participating in our "I Support" program, allowing us to keep offering readers access to our incisive coverage of local news, food and culture with no paywalls.
Make a one-time donation today for as little as $1.