How to Spend as Much Money on Coachella as Humanly Possible 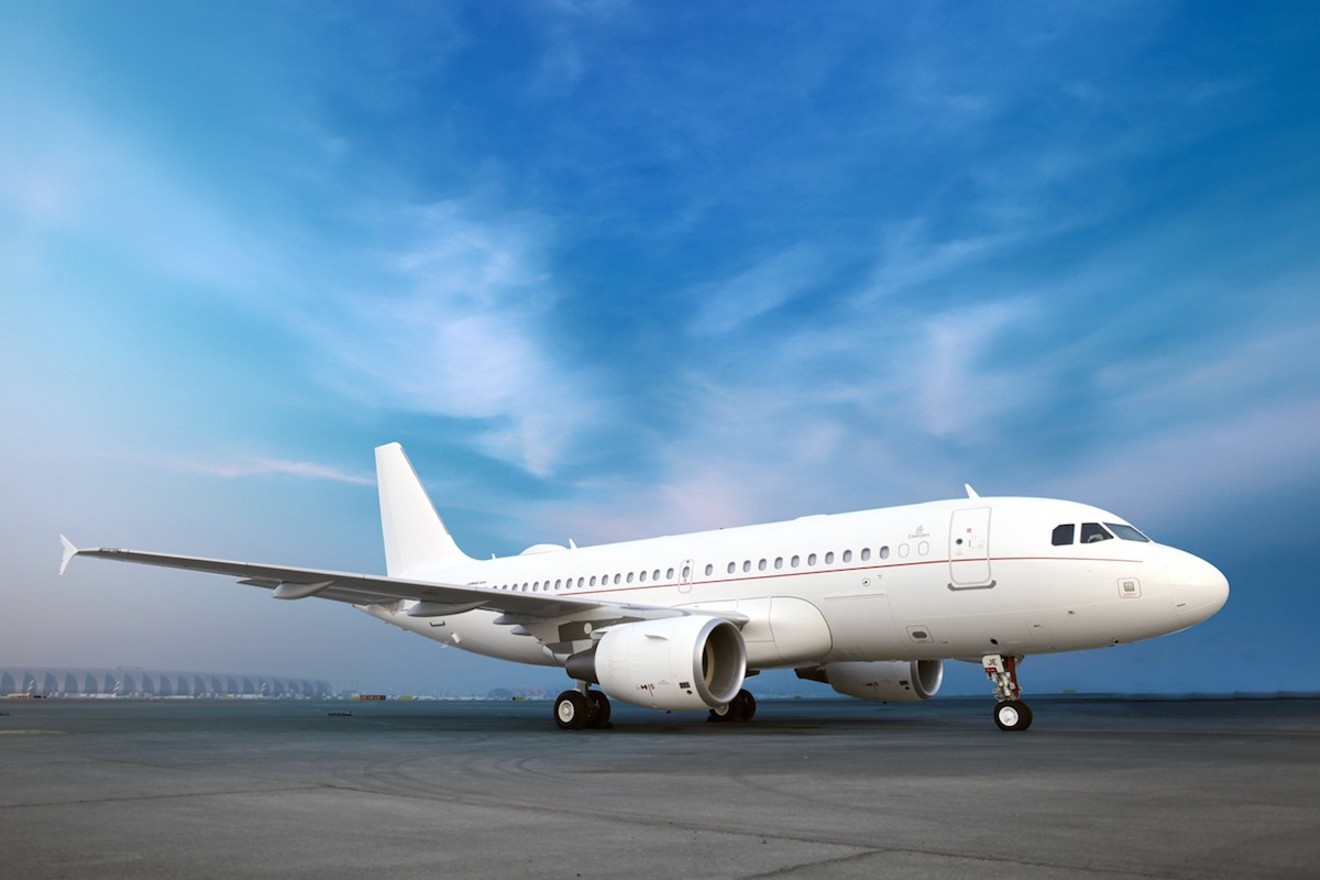 Beat traffic with your own private jet! Roderick Eime/Flickr

Coachella is an expensive affair no matter how you cut it. Once you have those $399 passes in hand, though, it’s a choose-your-own adventure, a matrix of infinitely unwinding scenarios, each with its own price tag. And as we've broken down before, it is possible to escape your weekend in Indio without nuking your bank account.

But what if money were no object? What if you had a literally inexhaustible amount of funds, with which you could open up a whole set of new possibilities, a world of luxury options typically reserved for the 1 percent of the 1 percent? Or at least a payday that rivals the $3 million to $4 million reportedly reaped by each of Coachella’s headlining acts this year?

First off, you will be skipping the $399 festival pass and going for the $899 VIP pass, which gets you access to a whole separate slew of food and drink options, shaded seating and even VIP bathrooms, far from the proletarian porta-potties and piss troughs of the main festival grounds. But paying an extra $500 for breathing room is just the beginning.

We surveyed the scene, from road-trip snacks to sit-down meals to swanky hotels, to present you with the most financially untenable, grotesquely wasteful Coachella experience you can possibly undertake. Because sometimes it’s fun to pretend, just for a moment, that the world isn’t falling apart around us; that money is no object; that your dad is the CEO of an oil company.

It can take about ten hours to drive to the Empire Polo Club if you leave L.A. on the Friday morning Coachella begins. That means you’re going to need about three square meals in snacks, just for sitting in the car. Dried fruit will give you that blast of antioxidants you’ll need for a weekend of debauched drinking, but why settle for a regular old bag of dried apricots ($4.52) when you could buy a same-sized packet of on-trend goji berries ($18.90)? I also recommend springing for a box of twelve GoMacro MacroBars for just $27.54, which is about how much it costs to buy 96 Quaker granola bars.

And, of course, you’re going to need to stay hydrated throughout the festival, but why settle for a $3 jug of 7-Eleven water when you can buy a 24-pack of imported Berg brand water for a cool $160.99? (The water, “harvested from 15,000-year-old North Atlantic icebergs,” is imported all the way from the distant, gleaming shores of Canada.)

Buy expensive clothes and other junk you will never use again.

I’m not going to pretend to know what kind of crazy process people go through to clothes-shop for Coachella. (Odds are high I will pack a couple of Hanes T-shirts and a pair of jorts.) But you don’t have to go far to drop some serious cash on dry goods for the weekend. Your humble Echo Park boutique will sell you a fest-ready ensemble (worn-in Levi's + 55% hemp T-shirt + cotton poncho) for a total of $350. One local thrift shop even has a freaky medallion at the register for $70, which would look quite intriguing peeking out from your chest hair.

You could waste some money at Free People, which despite getting sued by Coachella a couple weeks ago for trademark infringement is basically the official Coachella clothing store. It has $230 sunglasses (or, ahem, “Funk Soul Aviators”), a $128 painted-feather Meadow Monarch Crown or — and this is the best one — a literal stick (I mean, a Friend Finder DIY Kit) that for $58 manages to be both ludicrously impractical (you’re supposed to use a stick to find your friends among 125,000 other people?) and also sorta racist (it's, like, Native American–inspired or something).

Also, can we please take a moment to acknowledge the ridiculousness of Free People’s $35 Festival Survival Kit — a bag with a plastic poncho, earplugs, toothpaste and a “multitool" that is basically a bottle opener? (The kit, by the way, is marketed in the “Men’s Society” line — presumably because it includes a sharp object.)

Anyway, throw it in the cart.

You actually probably shouldn't buy this.
Free People
Fly to Coachella on a private jet.

Pack those road-trip snacks into your fancy stainless-steel refrigerator, or however the rich preserve their vittles, because you won’t need ’em — you’re flyin’ to Coachella. Over the years, Coachella has expanded from its original form, a typical dusty music festival, to also become a getaway for the rich and famous. The signs are everywhere, including at the airports; it's said that the little runways in Coachella’s vicinity (Bermuda Dunes, Palm Springs International, Jacqueline Cochran Regional) get pretty busy in the two weeks surrounding the festival. (Traffic jams aren’t limited to I-10, apparently.)

But even at this late date, it’s not too late to book your own private flight. A small jet, your most reasonable option, runs $2,930 for a trip from LAX to Palm Springs International. But reasonable isn’t what you’re after. Turns out you can book a whole airliner for you and your friends at a cool $11,540, or about how much it costs to buy a car and drive it to Coachella.

Stay at the fanciest hotels.

The Coachella Valley has been a resort destination for 100 years, and the area, including Palm Springs, is lousy with fancy hotels that long predate the annual migration of the laurel-crowned hordes. (These rooms book out months in advance, of course, but we’re using our imaginations here.) The Ritz-Carlton Rancho Mirage is the no-brainer — a five-star hotel about twenty miles northwest of the Empire Polo Club. The beds are even decked out with "400-thread-count Frette linens,” whatever that means. Coachella weekend has been booked out since God knows when, but a typical weekend in the Ritz-Carlton Suite — a 1,700-square-foot enclave featuring a balcony that overlooks the entire valley and a separate dining room that seats eight people — runs a very reasonable (for you!) $4,000 a night.

Perhaps unsurprisingly, you can still spend more money on an Airbnb, especially if you’re looking for a classy experience within walking distance of the fest. One listing, located a literal block from the Empire Polo Grounds, is a “desert villa,” a resort-like home with a giant pool, a “BBQ island” and "a custom wine cellar and wine fridge to impress all your friends." All yours for just $4,633 a night, or $16,541 for the duration of your stay.

But wait: There's an even more expensive option. Coachella offers luxury on-site "glamping" for those who want all the convenience of staying at the festival campgrounds with none of those pesky annoyances like communal showers, lack of air conditioning and sleeping on the ground. A basic safari tent will run you a mere $7,500 for two people, but for the true super-VIP experience, pony up for a fully furnished yurt, which comes complete with a chilled bottle of Champagne upon arrival, morning yoga, maid service, artists' wristbands for backstage access, private bathroom and shower, and a personal golf-cart driver and concierge "to assist you with tee times, spa and massage reservations, restaurant reservations, store runs, etc." All of this will set you back $25,000, which is — score! — roughly double the average per capita annual income in the actual town of Coachella.

Ditch the festival and check out the high-class pool-party scene.

For a decent percentage of Coachella parties, it’s not just that you have to be rich to afford a ticket — it’s that you have to be rich and/or famous just to be allowed inside. For instance, those who hold one of those mythical American Express Platinum Cards (you know, the stainless-steel credit card that automatically identifies you as a certified rich person) were given access last weekend to a private performance by pop singer Bebe Rexha at the Parker Palm Springs. Of course, that was just the beginning of the VIP-only first-weekend hit list, which included “float-o ops” at the Desert Oasis party (featuring a DJ set by third-tier Kardashian Brody Jenner) and Katy Perry’s “Recovery” Brunch.

This weekend is lighter on parties, but you can always spring for a $280 weekend pass to the “Cannaspa for Lupus” party, featuring cannabis yoga, cannabis cocktails and cannabis facials, which is sure to be at least marginally more fun than hot-boxing a two-person tent.

It has been well documented that the food at Coachella has become an attraction rivaling the music itself. And, all snark aside for a second, that’s for good reason, particularly when it comes to the festival’s oft-celebrated lineup of food vendors. Whether you’re a festival VIP (which, as we have established, you are) or a common festival plebe, there are myriad amazing, vendor-based culinary options at Coachella.

It’s well known, however, that the festival’s most indulgent dining experience is Outstanding in the Field, your opportunity to have a legit sit-down fine-dining experience without leaving the festival grounds. (Friday’s installment, for instance, features three big names in Southeast Asian cuisine: chef Jet Tila, chef Perry Cheung of Palms' Phorage and chef Louis Tikaram of West Hollywood's E.P. & L.P.) The whole deal goes down in the Rose Garden, and that shit ain’t cheap — at $225, it’s the equivalent of 32 slices of Spicy Pie pepperoni pizza. In this case, however, the experience is probably worth it. And what do you care, anyway? You took a private jet to Coachella.

Turns out, one can spend nearly $40,000 on the luxuries of Coachella, or about 100 times as much as a three-day pass to the festival. Whether anyone should spend that much money at Coachella, is, of course, an ethical question beyond the scope of this article. But it's something fun to think about, as you sit in the GA on-site campground, zipped inside the tent you rented from the YMCA, chewing a cheap granola bar and poking at the holes in your jorts.