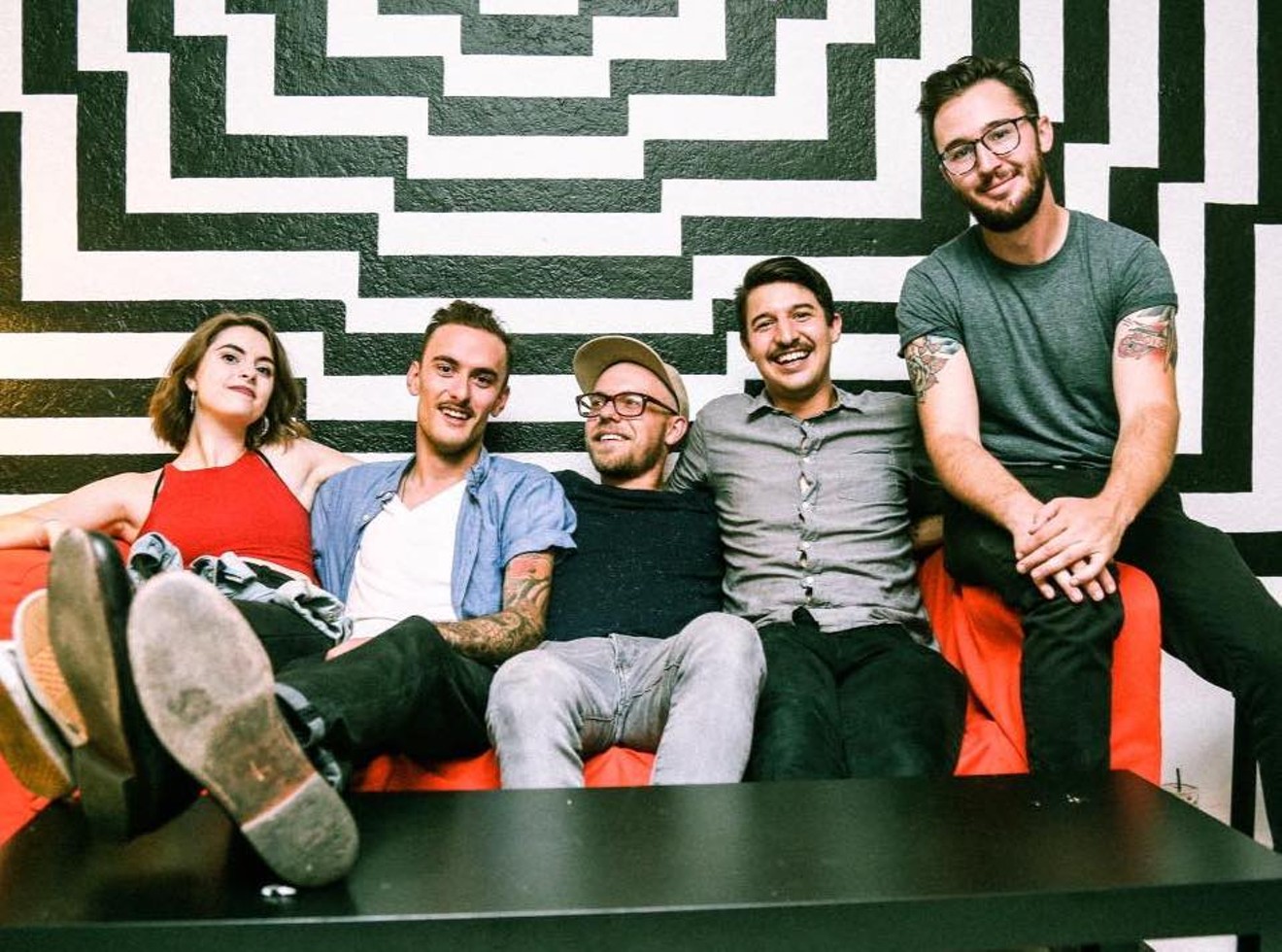 Denver indie-rock five-piece Silver & Gold is releasing a new EP this month. Courtesy Silver & Gold
Devon Hildebrandt, lead singer and guitarist of Denver indie-rock outfit Silver & Gold, recalls that the quintet of music majors came together a decade ago, hanging at open-mic nights and after-hours jams at the University of Northern Colorado. The band has come a long way from playing “cowboy chords on acoustic guitars,” he says, but at Silver & Gold's core, the bandmates are still just getting in a room and making music with their buddies.

“We’ve been friends for such a long time, and one thing we all say is, 'We’re friends before we’re musicians.' That’s always going to be a constant,” Hildebrandt says. “We bring that energy when we play live, too. We’re goofy, awkward people, so we’ll be goofy and awkward as hell on stage, too. We don’t take ourselves too seriously. I think it’s just a fun environment. That’s what we try to bring. I hope everyone in the audience feels the same way we feel on stage — just having fun with your best friends.”

The music of Hildebrandt, bassist Brandon Vela, guitarist Pie Lombardi, drummer Taylor Drose and keyboardist Claire Jensen lands on the spacier, and more soothing, side of a subgenre that runs the gamut of bands from Arctic Monkeys to The Cure. While Silver & Gold’s sonic history includes moments of folk, it wouldn’t be out of line to call the band’s current sound shoegaze — a more ethereal corner of indie rock.

“The dynamics are a huge part of what we aim for in our live sound," says Hildebrandt. "The way that you play it live, you read the room — feel the energy in the room and interact with that."

Hildebrandt and Lombardi like to experiment with sounds and effects, too. Once fully realized in Silver & Gold, the results are satisfying. “We’re both self-taught on guitar, so we don’t have a ton of technical ability, and we try to push the envelope where we can,” Hildebrandt explains. “We can play off of each other, drenching things in effects and then pulling everything back to be really dry, trying to find that balance as we write and using those different sounds to help us drive the song forward.”

The group will release a six-song EP, Saving Face, on Thursday, January 26, before playing a celebratory show the next night at the Black Buzzard at Oskar Blues. Corsicana and Juno Rossa are also on the bill.

“Sound-wise, I would say the new EP is probably not as heavy, with the exception of a couple songs that are way more aggressive than we've ever done. We’re really trying to explore the idea of dual lead singers between myself and Claire; she sings harmonies on pretty much everything. She has a phenomenal voice, so we’re really trying to write with a dual-singer mentality now,” Hildebrandt explains. “Everything is a lot more keys- and synth-based than we have been in the past. Even thinking about future evolution, in March we’re going back into the studio to do a couple of singles, and one of those songs will be fully fronted by Claire [for the first time].”

The latest single release, “Simple Alone,” showcases the harmonies that Silver & Gold does so well.

Since recording Saving Face during the pandemic in 2020, the group has spent time revisiting the newest songs in preparation of playing them live, which has injected some fresh excitement into the five friends’ process.

“I would say that is always tricky after leaving the studio," Hildebrandt says. "You go there with a full song, work with new parts and change things, and then as you’re recording, things are layered in different ways and you’re punching in and out. By the end, the final product, while it’s the same song, it’s pretty different than what you went in with.”

“It's been like relearning your own songs, and not only learning how to replay them, but also actually perform it and make sure it’s more of an engaging presence in concert," he adds.

He admits that it’s “a little stressful just because it’s been so long,” but the band is essentially looking to pick up where it left off, particularly after a busy 2019 with 54 shows, including opening locally for Motion City Soundtrack.

“Rehearsal is just really fun and exciting, and we’re just waiting for the opportunity to play all of [the songs] live for people other than whoever lives in the house we’re practicing in and the neighbors who can probably hear it through the walls,” Hildebrandt quips. "It’s an old feeling made new, especially thinking about playing before 2020. … Now coming back to playing shows, we all feel nervous, I guess you can say. That excited-nervous you get right at the beginning, the first-time-playing-live kind of feeling. It’s been fun to relive that energy.”

Silver & Gold, 7 p.m. Friday, January 27, Black Buzzard at Oskar Blues, 1624 Market Street. Tickets are $15-$20.
KEEP WESTWORD FREE... Since we started Westword, it has been defined as the free, independent voice of Denver, and we'd like to keep it that way. With local media under siege, it's more important than ever for us to rally support behind funding our local journalism. You can help by participating in our "I Support" program, allowing us to keep offering readers access to our incisive coverage of local news, food and culture with no paywalls.
Make a one-time donation today for as little as $1.