JPEGMAFIA: Every Music Journalist Is a "Turkey Ass N*gga" 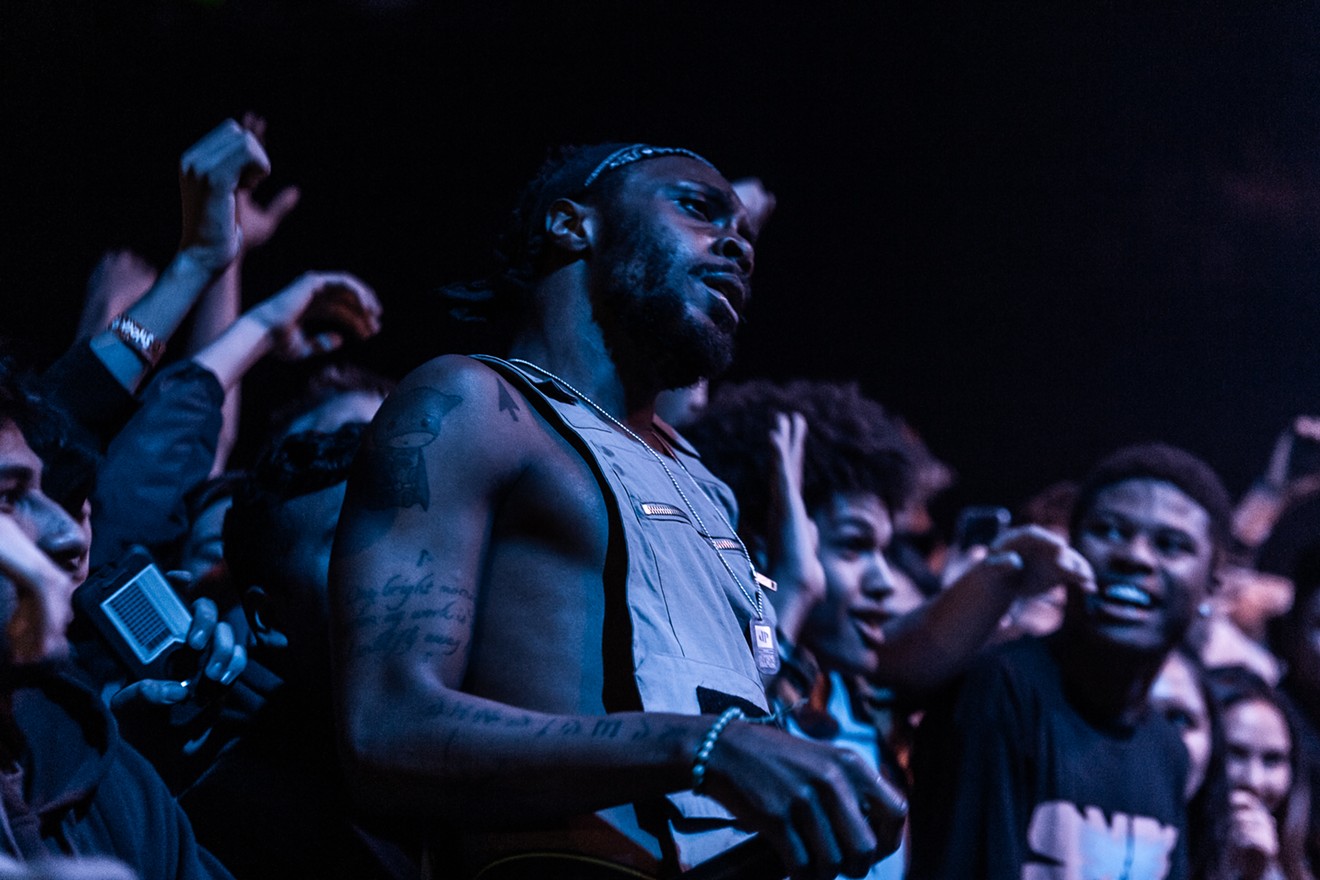 JPEGMAFIA performing at the Ogden Theatre on March 18 as part of the Smile, You're on Camera Tour. Brandon Johnson
JPEGMAFIA goes by @darkskinmanson on Twitter, where he's noisy and furious. If hip-hop still has teeth, they're in his mouth. And recently he's been gnashing them at music journalists.

When Peggy, the nickname the musician born Barrington DeVaughn Hendricks goes by, comes to the Bluebird Theater on October 24, he's likely to prove himself once again to be one of the few artists taking actual risks, courting real controversy and keeping things edgy — musically (his sound is about as pleasing as a war zone), physically (he's dizzying to watch as he darts around stage) and lyrically (his tongue's an AK-47, blasting at the White House, Morrissey and Drake alike, along with about a million others).

While a few enjoy his lashings, others can't stand him. When he opened for Flume at Red Rocks earlier this year, the EDM producer's fans tweeted at him, begging him to quit music.

"I really wanted to give these openers a chance but jpegmafia just gave me ear cancer," wrote Hayden Temple of Wonderland RR.

Peggy's response: "Spent most my night in the crowd & the EDM bros had no smoke for me. But plenty of tweets. Imagine being THIS PUSSY. I’m in your face don’t tweet me white boy say something or sit your weak ass down and enjoy the transformer noises hoe."

One of his latest jabs is at us music writers.

In a recent tweet on the subject, he wrote: "Why is every music journalist a turkey ass nigga in real life?"

He goes on: "All these niggas the same exact ration of corny and delusional."

...and on: "Like imagine having no talent and barely making 30k a year talking about talented niggas all day and thinking u the shit for it."

By no means is he alone in swinging at journalists. Earlier this year, Lizzo took umbrage with us. So did Lana Del Rey. And don't forget the commander-in-chief, who has been attempting to incite violence against reporters worldwide.

But Peggy's not Trump. Neither is he Lizzo or Lana Del Rey. He's an underground rapper who hasn't exactly topped Billboard charts and doesn't seem to care.

The responses to his remarks about journalists are pretty funny — if not cringe-inducing:

"Cause bruh imagine not having the talent to do something so you just have to write about it forever," wrote Bubble Boy.

"Because they think a degree from some bum ass college, dressing off the mannequin at urban outfitters, and listening to Mac Demarco makes them cultured and well versed," added CHAND\_ER.

"Cause they old and white," weighed in Emotional Machine.

JPEGMAFIA plays at 8 p.m. Thursday, October 24, at the Bluebird Theater. Tickets are $22 to $25 and available at AXS.
KEEP WESTWORD FREE... Since we started Westword, it has been defined as the free, independent voice of Denver, and we'd like to keep it that way. With local media under siege, it's more important than ever for us to rally support behind funding our local journalism. You can help by participating in our "I Support" program, allowing us to keep offering readers access to our incisive coverage of local news, food and culture with no paywalls.
Make a one-time donation today for as little as $1.