Lacuna Coil — The Kings (and Queen) of Italian Metal 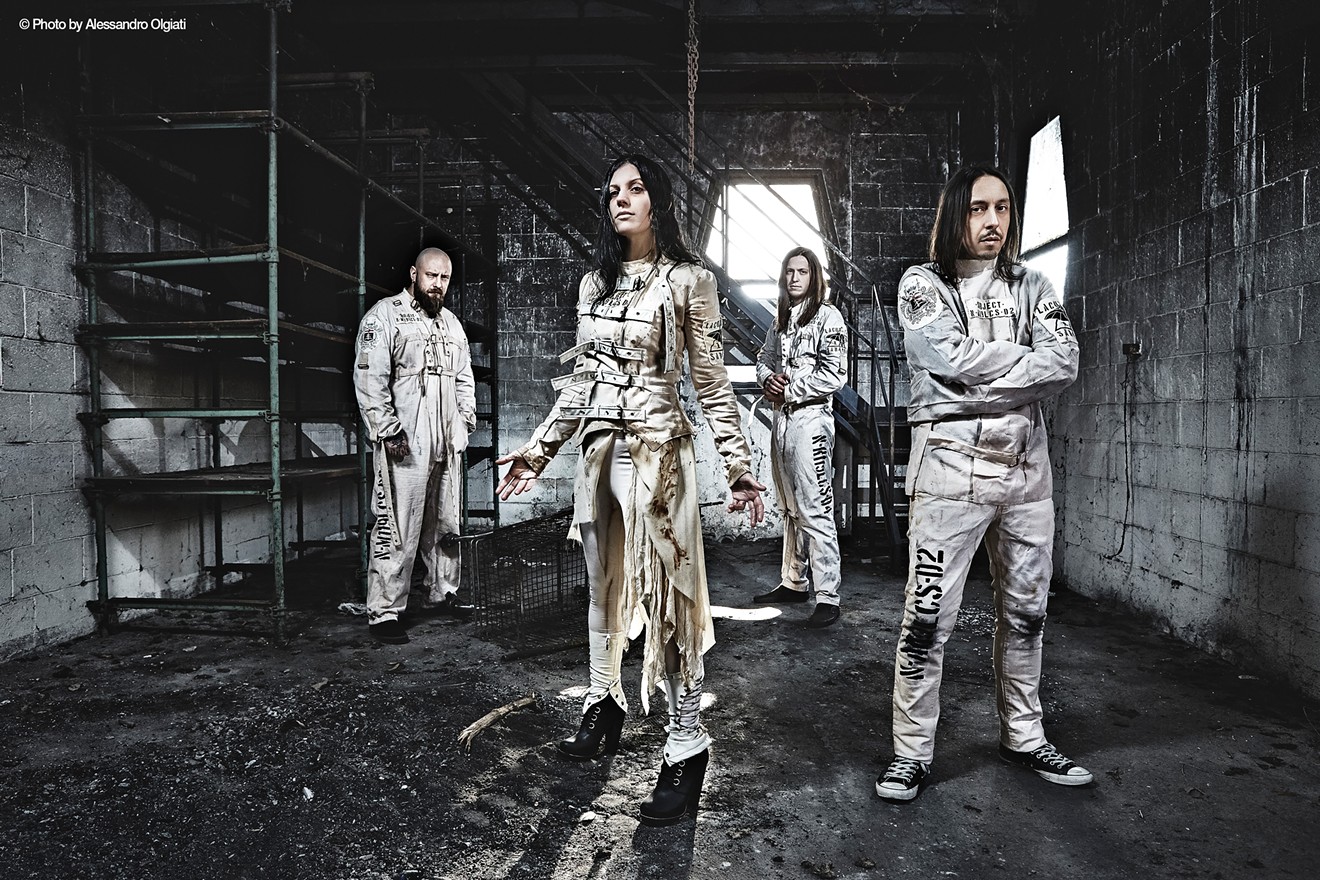 Lacuna Coil Alesssandro Oliati
Italy is a beautiful country. Like, stunningly gorgeous. The cities are magnificent and culturally rich. The countryside is perhaps even more impressive. It’s an amazing nation that has given the world amazing literature, poetry and, of course, opera for years. It hasn’t, however, been known for its metal bands. There are a few bands that had a cult following for a short time, such as Ephel Duath, Linea 77, Death SS, Rhapsody of Fire and Dope Stars Inc. But goth-metal stars Lacuna Coil sit at the very head of that particular table.

The bandmembers met in 1993, and there were short bursts at the beginnings when they were known as Sleep of Right, then Ethereal. But the first Lacuna Coil release, a self-titled EP, was put out by metal label Century Media Records in 1998, and singer Cristina Scabbia sees that as the real start — which means that next year, the act will celebrate its twentieth anniversary.

Grow they have. Since the much-loved In a Reverie debut album in 1999, the band has put out eight studio albums, none of them bad. The most recent is last year’s Delirium, and Scabbia has been happy with the response from fans old and new.

“Most of all, we were happy with it,” she says. “It’s weird to say that it’s the complete package — that’s not how we write records. But it’s complete in terms of having the theme which feeds with the image, with pictures that we took. We self-produced it in Milan, we recorded it in Milan, we mixed it in Milan. So it was 100 percent our creature, and we’re super-proud of it.”

That theme she refers to is very close to Scabbia. The album deals with the issue of mental illness, something that Scabbia witnessed through a family member. As a result of difficult times, the musicians were able to approach the subject in a sympathetic manner, and with some genuine knowledge and experience behind them.

They certainly didn’t. The fact that the band was dealing with very real issues is almost at odds with the larger-than-life, epic goth-metal symphonic aura and image that it's cultivated. On the goth spectrum, Lacuna Coil are far more Type O Negative than the Cure, though they don’t much care for those cookie-cutter genre tags anyway.

“The label is because, when we started, we were inspired by bands like Type O Negative or Paradise Lost,” Scabbia says. “Our music was in that line, so I understand that they called us goth metal. Truth is, we’re not like a goth band. We have goth elements, and our music is very dark, melancholic and deep. But we are not a typical gothic-metal band. We definitely dress in a lot of black, though.”


The recent album is also notable because the personnel changed after 2014s Broken Crown Halo. No big deal, says the singer.

“If you look at the previous record and compare it to this one, it looks like we’ve lost three members, but the reality is that two of them resigned even before the record came out,” she says. The real recent loss was one of the two guitar players [Marco Biazzi], who left basically during the recording because he felt that he wasn’t contributing to the record, and he didn’t feel he was expressing himself. We feel great about it, to be honest. Now we have a killer lineup that’s bringing a lot of motivation and energy to the band. They’re great musicians — I’m talking about Ryan [Blake Folden, drums] and Diego [Cavallotti, guitar]. We feel fantastic.”

They should feel good. Delirium is a great record, with the band sounding more lyrically and musically mature than ever. The dual vocals of Scabbia and Andrea Ferro remain a selling point, and the band retains a healthy following in both Europe and the States.

“I think that our popularity in the States started back in 2004 with the first Ozzfest that we did,” Scabbia says. “We released a record, Comalies, that had a song called ‘Heaven’s a Lie’ on it. That started to be played on the radio, so it has been a while that we’ve been familiar with the States. We did so many tours here that I cannot even count. Every band goes through phases, ups and downs. Especially for us, because we’re not the band that only works in Europe or only works in the U.S. You have to work hard to keep them both happy, but it’s not easy, because we can’t be in two places at the same time.”

Lacuna Coil doesn’t spend a great deal of time touring in Italy, since the metal scene there has never really taken off. Yes, they recorded the new album in Milan, but touring in Italy has to be limited.

“There is a scene, but Italy is really conservative,” Scabbia says. “There’s a lot of pop music and traditional Italian music, but metal and rock are definitely not main genres. It’s not thriving, to be honest. Our work is basically 90 percent out[side] of Italy. There are a lot of supporters, a lot of people who listen to this type of music, but I don’t think it’s something that is growing. It’s pretty consistent, because the fans will always be there and always be faithful and loyal, but that is it.”