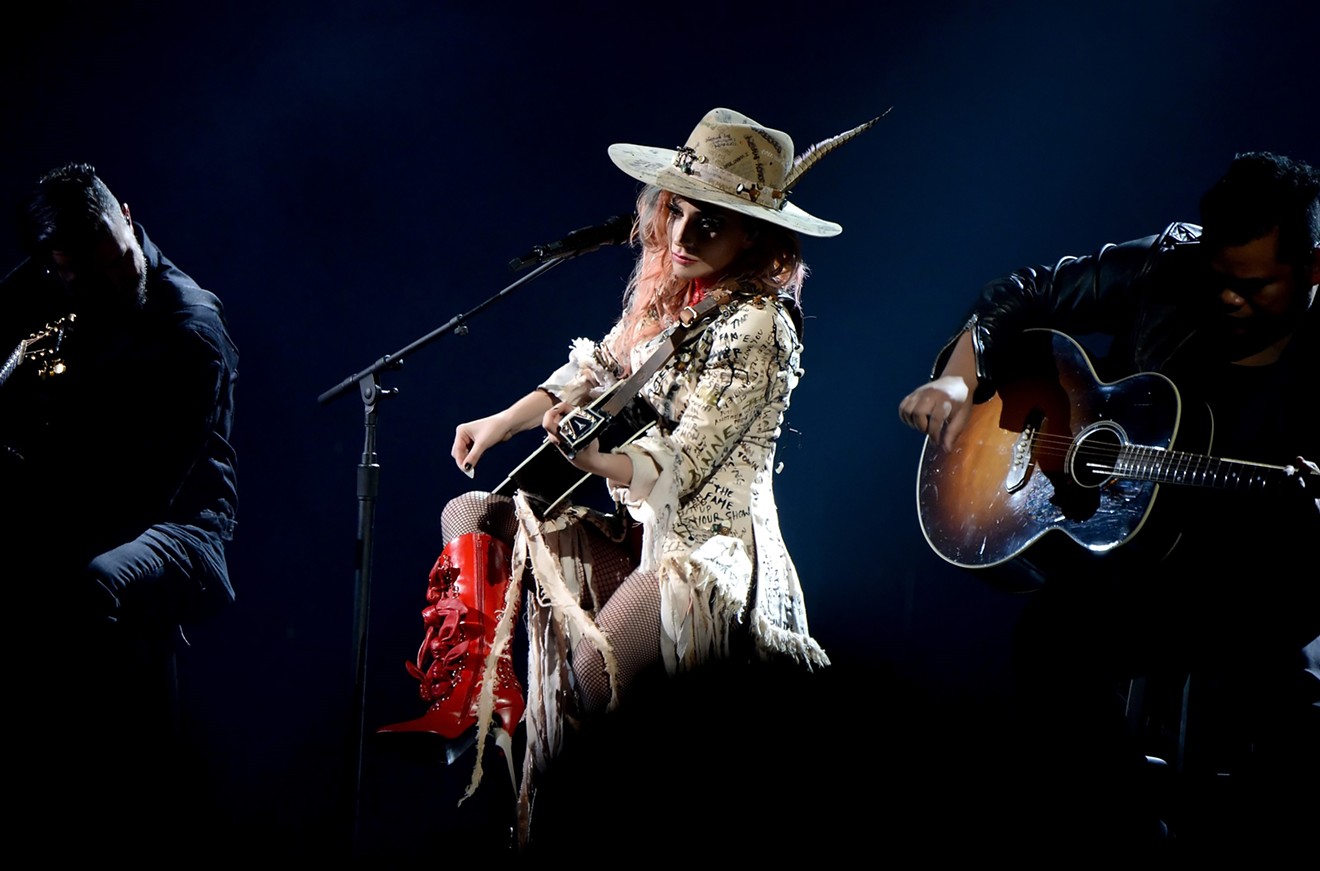 Her performance in Denver on Tuesday prompted the question: Is she all glitz and glamour, à la “Poker Face,” or more rootsy and earnest, the artist depicted in her most recent album, Joanne, whom she labeled at one point during the show as Midwestern (long after reminding us that New York City was her home town)?

Gaga must struggle with imposter syndrome. After all, she’s the self-appointed goddess of misfits, queers, the depressed and the lonely. She has donated money and time to saving children from bullying — philanthropy she touted in pre-concert ads and also on stage. She loudly champions LGBTQ equality and attempts to boost the self-esteem of her fans, to whom she refers, almost ironically, as “my little monsters.” All that’s done under the pretense that she’s “different, too." She’s “Born This Way” — the name of her hit song, album and anti-bullying foundation.

Lady Gaga
Getty Images for Live Nation
What makes her a misfit is that she’s so damned successful. Oddball or not, she has topped Billboard charts, won Grammys and sold millions of albums. That makes her abnormal.

Many artists have struggled to embrace both authenticity and artifice. Gaga, Katy Perry, Kesha, three performers vying for Madonna’s throne, each experimented with a performative coffee-shop-singer-songwriter moment in their recent Denver concerts — all three using acoustic guitars as symbols of "real," as if to say: “Look, I’m a real person, too, because I can play this real instrument, and these are my real feelings...really...no, really.”

Gaga broke out the acoustic for “Joanne,” a personal song— and the namesake of her tour — about family and loss and all the things that would generally make me well up. But between her garish take on a down-home outfit and her pleas for us to remember our most painful and profound moments in life, the number came off as ham-fisted, in part because it wasn’t clear if Gaga was actually playing the guitar or simply treating it like another prop.

During that song, her backing band’s guitarist performed masterful strumming and picking patterns that evoked Ani DiFranco, that much-maligned crooner of authenticity who can actually sing and play all at the same time, while Gaga clumsily clawed at her guitar strings and lugged it around as the genuine picking played on.

Lady Gaga
Getty Images for Live Nation
It’s puzzling why she leveraged the campfire instrument. After all, she’s a gifted pianist and authentic on that instrument, as when she summoned her torch-singer-meets-Baptist-preacher persona to make audience members sniffle and snort throughout “The Edge of Glory.”

Much of Gaga’s banter, between hits like “Alejandro” and “Perfect Illusion,” was tiresome. Her monologues sounded like she was trying to make a beat-up-dead-horse script sound like it was coming off her tongue for the first time, each soliloquy leading too neatly into the title of the next song — almost always with a gag-me pun.

Like most upbeat pop stars, Gaga swore she wanted to give us her love. She wanted us to know that she thought about us constantly. She wanted to be our cure when we are down.

She must get tired dishing out all that emotional energy every night. Still, it has its rewards.

One woman chucked a unicorn doll on stage with a note about how she suffered from depression and how Lady Gaga was her cure. When Gaga decided to meet her mid-concert, she stepped off stage and shared a moment with the woman, who seemed both moved and horrified to have her name and image broadcast to tens of thousands of people.

Gaga told us about the arctic-wolf-like beauty of the woman’s blue eyes. The camera zoomed, and we saw an extreme close-up of the fan’s blue eyes, something akin to those horrifying shots of the woman fleeing Leatherface in Texas Chainsaw Massacre.

The awkward encounter shed light on Gaga’s song "Paparazzi" and her gratitude toward her fans for not objectifying her — which is precisely what she unwittingly did to her fan.

Lady Gaga
Getty Images for Live Nation
For all the good Lady Gaga does for the misfits, she could use a good talking to about how not to make disabled people uncomfortable. Her prodding and guilt trips directed at audience members who weren’t standing were an accidental jab at those in wheelchairs; her aggressive declaration that she is not blind (right before she talked about how her mother told her not to stare at people who were different but to never look away) was a thoughtless slap in the face to those who cannot see.

Gaga should know better. And model better. After all, she’s quick to lecture the crowd and lovingly smack around those who might not believe in marriage equality. For someone who values inclusivity, ditching language that alienates disabled people would serve her well.

Gaga has positioned herself as a therapist for the world, a person who is open about her own internal quarrels, an artist exploring the limits of identity and doing so in a way that we can't help but be swept into. All that is powerful.

Whatever her relationship to fame — be it earnest or manufactured — she positions herself as a savior for us all, a person who sees herself reflected in each of us, all small mirrors on a spinning disco ball in which she sees different angles of herself. That’s how she puts it. It’s a mind-bender, a mystical yet kitschy image — kind of like her. But because of that image and her commitment to each of her fans, no matter how broken we are, the world is a more loving place because of her, even when her perspective's a little off.