Give Thanks for Magic Mushrooms. Without Them, There'd Be No Love Stallion

Love Stallion resurrects the glam rock and hair metal of the '80s. Susan M Wolcott
Two moments in Aaron Hart’s life led to the creation of Denver’s Love Stallion, a four-piece band that pays homage to the glam rock and hair metal of yore. One was a hard-rock set by Prince in 2013. The other was that time in 2014 when Hart gobbled a headful of mushrooms and hit up a KISS/Def Leppard show at Ball Arena (then called the Pepsi Center).

“We were just right in front of where Gene Simmons stands,” Hart recalls. “He’s staring at you, and his tongue is out and shit. I’ve played KISS pinball since I was ten, but when it’s right in front of you and you’re on mushrooms, it’s just completely mind-blowing. It was like the most spiritual experience.”

Hart remembers walking to get a drink in between sets, and he and his friend Rob McLemore, the original guitarist in Love Stallion, began writing the lyrics to an early Love Stallion track while singing vocals into their phones. They’d seen these kinds of bands play before, but for the first time, they were struck by the spectacle.

“It was just a pivotal moment,” Hart says. “The whole fucking Pepsi Center was going nuts. So, yeah, for me, it was kind of like one of those big turning points, like, ‘Oh, my God, we have to do this, but do it our way.’”

Hart, who plays guitar, is joined by Tay Hamilton on lead guitar, Sabrina Winter on bass and Frankie Bones on drums. The four have formed a stable lineup the past few years and have released two albums.

The group wrestled with its branding, because “hair metal” to many evokes plain “metal,” which by modern standards is a far cry from the bands that haunted the Sunset Strip in 1986.

“Some of those bands started and they were called heavy metal,” Hart says. “But what they were playing wasn’t super hard, necessarily. We’re more like straight rock and roll with a little blues thrown in. When we’ve said hair metal, people say, ‘This isn’t metal.’ That’s why we moved it to glam rock, even though we have long hair.” 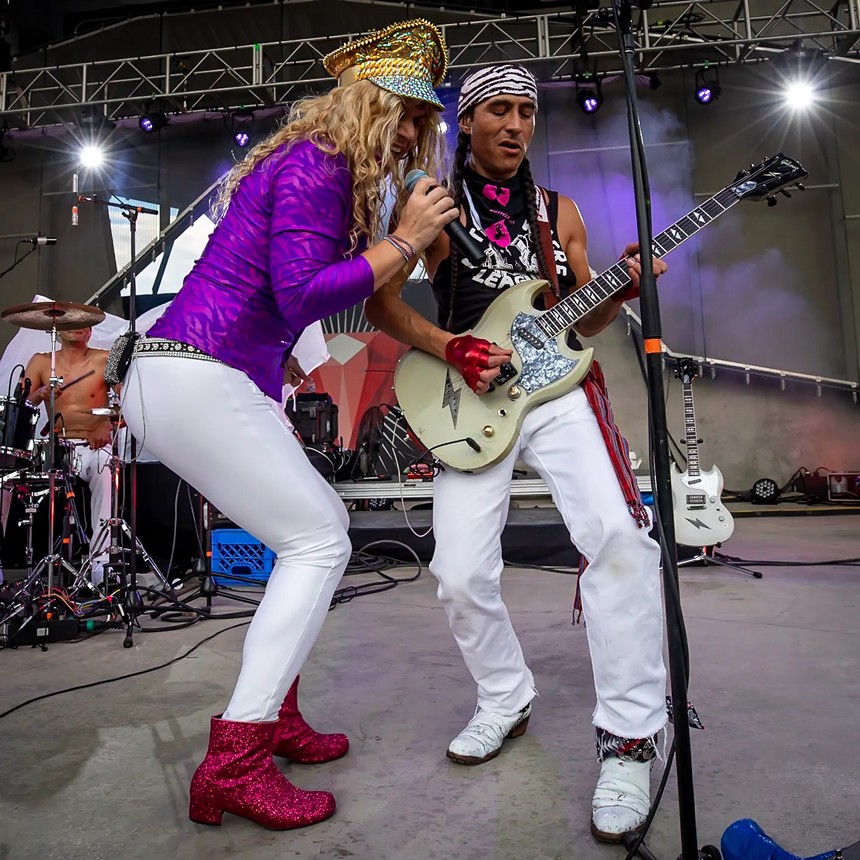 Love Stallion
Susan M Wolcott
Love Stallion writes and records its own material, releasing its sophomore effort, Hot to Trot, last year. The music does recall a certain era in 1980s popular music — leather-clad, lipstick-sporting dudes with big hair — and the band has played the famous Whisky a Go Go in Los Angeles and shared the stage with classic glam acts such as L.A. Guns. Hamilton says the Sunset Strip scene of the 1980s has a certain mysticism to it, and the band draws on that sound and influence.

“It’s not the only thing that this genre or this style works with, but it’s definitely a good place for us to go play,” he says.

Hart finds the shtick genius, and Love Stallion engages in a bit of the same on stage. For example, the band employs a set of sexy disco legs — a take on the disco ball, but with a nice set of a gams — that was a custom job made from a hot-wax mold of Hart’s own legs. It’s complete nonsense, of course, but everyone is having a good time, so who really cares?

“Maybe that’s the whole joke,” Hart says. “It’s kind of a long-lost genre that no one’s doing. People are like, ‘Oh, hair band. Are you serious?’ And we are serious. It’s a tongue-in-cheek, big-rock sound we love so much.”

Love Stallion plays the Fillmore Auditorium, 1510 Clarkson Street, on Saturday, April 16; tickets start at $19.75 at livenation.com. Hot to Trot is available at lovestallionrocks.com.
KEEP WESTWORD FREE... Since we started Westword, it has been defined as the free, independent voice of Denver, and we'd like to keep it that way. With local media under siege, it's more important than ever for us to rally support behind funding our local journalism. You can help by participating in our "I Support" program, allowing us to keep offering readers access to our incisive coverage of local news, food and culture with no paywalls.
Make a one-time donation today for as little as $1.