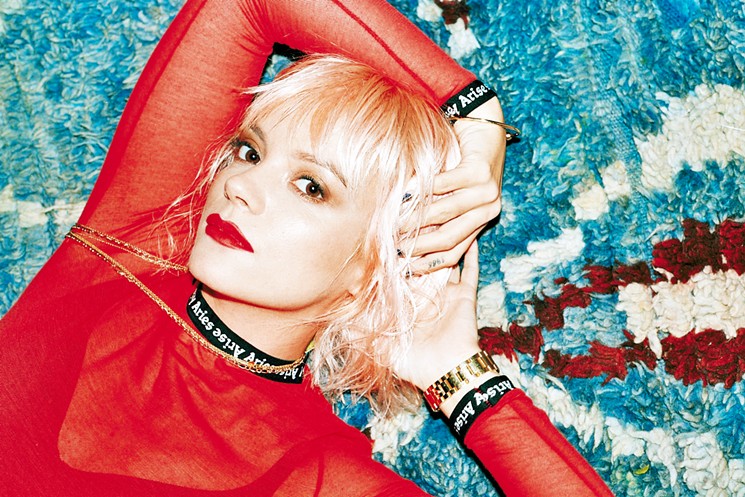 Lily Allen headlines the Summit on Saturday, November 3.
Bella Howard
When we spoke to British songstress Lily Allen on the phone last week, the day after her concert in Boston, she said she’d had the flu for days.

But earlier this week, Allen canceled shows in Chicago and Minneapolis, writing on Twitter, “My throat and vocal chords [sic] are so inflamed and angry. Working on rescheduling and will have more info for you as soon as I get it.”

Allen’s Denver show on Saturday, November 3, which is still is on, is part of her tour in support of her latest effort, No Shame, which finds her diving into electro-pop, dancehall and reggae. She says this tour is completely different than 2014’s tour on the heels of her last album, Sheezus.

“Last time ’round, people would have thought, ‘Oh, Lily’s having a great time,” Allen says. “’There’re loads of baby bottles, or she’s wearing no clothes and dancers are doing sexy moves. Everything looks great in her world.’ But actually, it had never been worse.”

Following the release of Sheezus, Allen suffered from an identity crisis followed by a dissolving marriage with Sam Cooper. The two officially finalized their divorce last June and share custody of their two daughters.

“I had just had two small children,” Allen says. “I was really trying to re-enter the mainstream music market, and I did what I thought people wanted. And not only was it not what they wanted, but it was also pretty shitty. It just wasn’t very good.”

Allen says all the themes on No Shame were all things she was going through around the time of Sheezus.

“On the last album, I was trying to cover them up or smear them in some way, and it culminated in the end of my marriage and mental breakdowns and alcoholism,” she says. “So that can’t be a good thing.”

Allen says the look and feel of the No Shame tour is different.

“There are a lot less people,” Allen says. “I used to have backup dancers and lots of stage production and stuff. This show is much more stripped down. It feels more intimate and more honest, I guess.”


Allen’s not sure if it’s gotten easier to be more vulnerable.

“On the last time around, when I was making a record and touring it, I was running away from the truth, and this time I’m embracing it,” Allen says. “It’s not harder or easier. It’s difficult, because I was weary if I wasn’t being truthful.”

While Allen embraces the truth on No Shame, she also does that in her new autobiography, My Thoughts Exactly. Part of the reason for writing the book now was that she’d felt like she wasn't in control of her music platform, adding that radio people — Spotify, Apple Music and Warner Bros. — are in control of how far her message can go.

“All I can do is kind of create the stuff and hope that it lands to the best of its ability,” Allen says. “But I rely on all of those other people to propel that somewhere further. And I don’t know necessarily if my message is in line with their messages. On the last record, I became aware that this is a potential area or concept, maybe…and that even though I believe I wrote the best album that I possibly could, it might not turn up in people’s feeds. I don’t know if the algorithms are in my favor at the moment. And so, knowing that, I felt like I wanted to have something else run alongside it.”

When Blink Publishing approached her with an offer, Allen felt like it was a smart thing to do.

“And I think it has been smart, because my album hasn’t done particularly well commercially, and I haven’t had a lot of airplay, even though it’s been by far my most well-received record to date in terms of critical acclaim and reviews,” Allen says. “If everyone has agreed that this is my best work yet and it’s not getting out there, then I don’t know. I don’t know what else I can do.

“So the book, I guess, is sort of...not a last ditch attempt, but like a battle cry, I guess, in a lot of ways," she adds. "I think it was pretty smart, because it’s the number-one best seller in the U.K. People have gone back to listen to the music again once they’ve read the book. It’s done the job that I wanted it to do.”

Lily Allen, with S-X, 8 p.m. Saturday, November 3, Summit Music Hall, 303-487-0111, $34.50-$49.50.
KEEP WESTWORD FREE... Since we started Westword, it has been defined as the free, independent voice of Denver, and we'd like to keep it that way. With local media under siege, it's more important than ever for us to rally support behind funding our local journalism. You can help by participating in our "I Support" program, allowing us to keep offering readers access to our incisive coverage of local news, food and culture with no paywalls.
Make a one-time donation today for as little as $1.