Reader: Get Past the Trigger Word and Read About the Real Issue 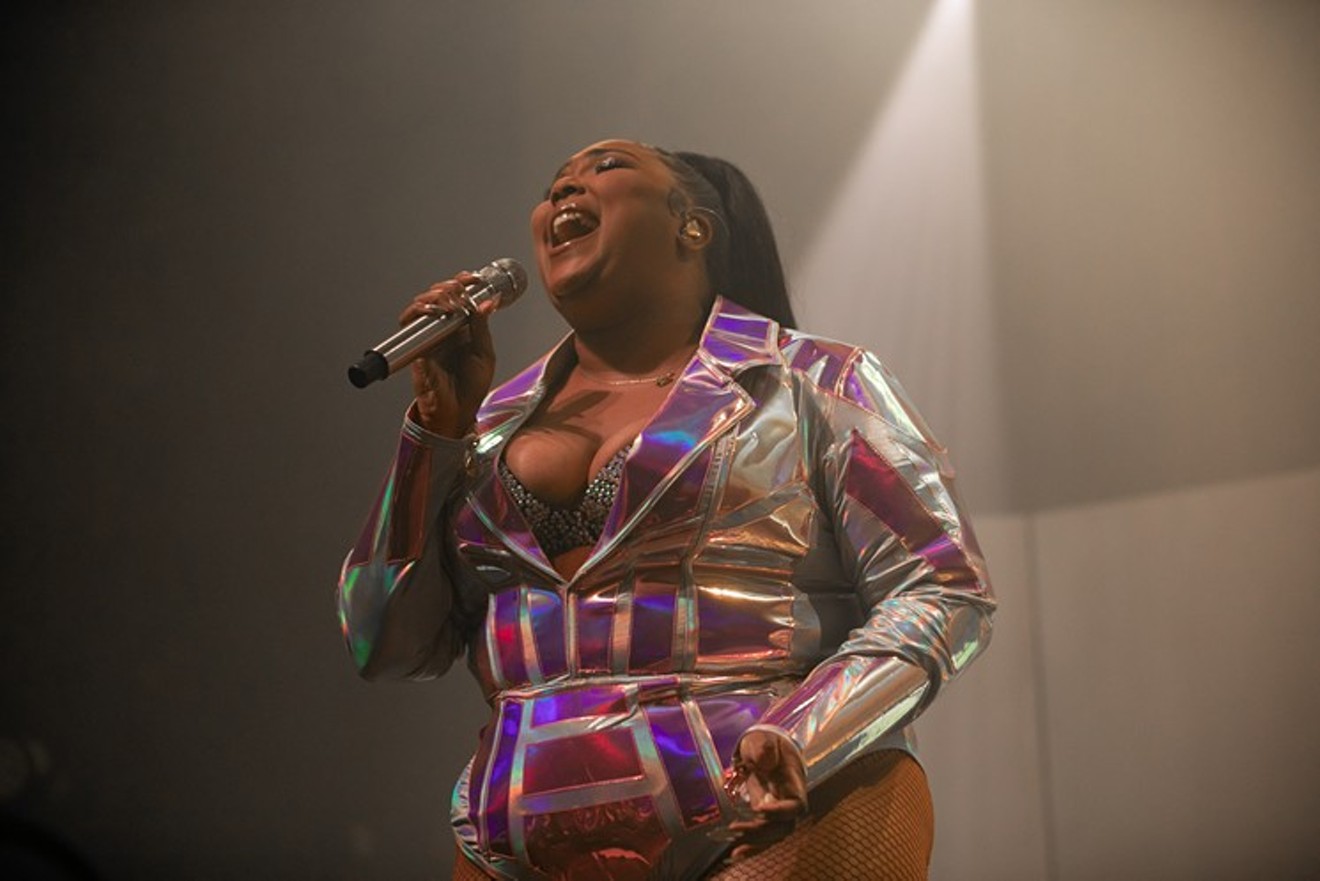 Aaron Thackeray
The May 1 Lizzo concert at the Ogden Theatre was was so packed, it made it tough to dance. And as Kyle Harris noted in his review, "Lizzo Makes Healing Music for Fat People Who Deserve Space to Dance," her music really makes people want to dance.

Harris chided promoters for selling more tickets than they should have, noting that "Lizzo, who worships large bodies and expects her fans to do the same, brought out more big fans than most artists do. That’s a beautiful thing. And all those big bodies deserve space to dance alongside her skinnier fans."

But some readers took umbrage both with the headline and the review itself. Says Eryn:

If that’s all you get out of Lizzo’s music, I feel bad for you.

Uhhh... okay? Her music rules and it’s good for women to feel empowered.

Did you really say fat people? I love her music but your headline is little to be desired. Her music is about body positivity and loving yourself. I won’t read the article because calling people fat is stupid!

The performer refers to herself as fat, so what's the problem? Bless her for not giving into all the PC euphemisms and owning that shit. Not a fan of the performer, but I think everyone is missing the point of this article just because of a word that triggers them. These venues have an occupancy limit based on the number of persons. These limits were set based on an average body size that is outdated. Airlines have had to adjust their weight limitations long ago but this hasn't happened in your average concert venue. They sold the same amount of tickets as they usually would not to exceed the occupancy limit, without taking into account that many of this performer's fans were going to be fat and thus "occupy" more space. I get it, its all about money for them, but it does make it uncomfortable for everyone to move around when you're all crammed into a space that seems small because most people there are so large. Get past the trigger word and read about the real issue, because a lot of humans are fat and that's just the way it is.

I would suggest that not all music touches all people. Diminishing Lizzo, her voice, stage presence, songs, attitude and fans rather than just admitting ‘not for me’ shows a lack of culture, self awareness and understanding of modern pop culture. Btw, I’m mid 40s, not overweight and the show was no more crowded than a typical show. I call bullshit. It was a fucking awesome show.

After reading the article, I believe that Kyle's heart is in the right place. He is praising Lizzo's music and her message, absolutely not marginalizing her talent or her larger fans. His complaint is about the lack of space in the venue and how the promoters should have planned to accommodate more fans who aren't skinny white boys and girls.

BUT, the problem is that he focuses that complaint, and the review in general, around himself being a skinny white boy who couldn't get comfortable in the crowd. If he was so miserable for a couple of hours at a concert - just imagine how it feels for those of us who can never be comfortable in crowds at shows, or on airplanes, or restaurant or stadium seats, or public bathroom stalls, or so many other places that are designed around people of his size. Image what it's like to not be able to buy clothes that fit (or look good) in so many stores. Imagine being so often on the receiving end of the disdainful and hateful glares of so many skinny boys and girls. Imagine be told by subtle and not-so-subtle messages in our culture every day to hate yourself for all of it. Then imagine reading how poor Kyle didn't enjoy himself at the show because there were too many "fat" people in the crowd.

I wasn't at the Lizzo show. I'm not a fan but I respect her art and can certainly understand her appeal. God bless the fans of all sizes who were there and from the looks of the crowd shot in the article were having an AMAZING time.

And Grant wrote us directly with this:


Hello, your article that you recently published about lizzo is very problematic. I find it to be very fat-shaming and not an accurate description of the concert. I understand everyone is critical and isn’t going to agree with everything or everyone. But I strongly encourage on having your author rethink some of the fat-phobic comments in the article.

It further saddens me on how this article was okay to be published with this kind of language without anyone in Westword would have the decency of rethinking.


As we told Grant, in publishing this review, we took into account the fact that Lizzo herself uses the word "fat," and did so from the stage. Should we censor her words? 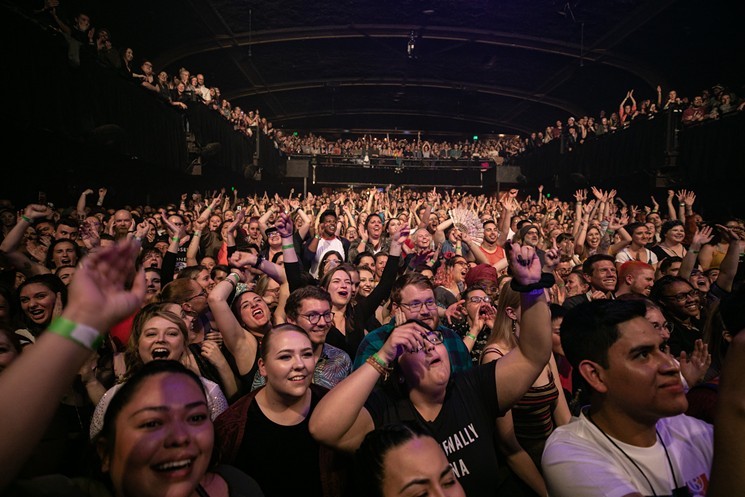 The crowd at the Ogden on May 1.
Aaron Thackeray
For the record, here's how Harris (who would definitely not describe himself as a "skinny white boy") concluded his Lizzo review:

"Lizzo is an artist who is in it: who once upon a time lived in her car, who struggles with self-hatred, misogyny, racism, fat phobia and pain (not to mention the 'fuck boy' she croons about in the song 'Jerome'), and who continues to be insulted and slurred and mocked by the trolling class.

"Through it all, she delivers joy. She shows us how to embrace ourselves despite all the suffering, to open our hearts to let ourselves cry, to do the work that makes us love ourselves and each other. She’s a survivor who makes music for survivors.

"Is it corny, trite or prescriptive pap? True, her lyrics aren’t dizzying in their complexity, and she’s more self-help than Shakespeare. But she’s funny, she’s cutting, and she’s to the point. It works.

"In a world that grinds black, fat and femme bodies down, the healing power that Lizzo offers is pop music at its best. Who are we to refuse that medicine? Venue operators just need to make sure we have enough room to take it."

What do you think of Harris's review? That headline? Post a comment or email [email protected]
KEEP WESTWORD FREE... Since we started Westword, it has been defined as the free, independent voice of Denver, and we'd like to keep it that way. With local media under siege, it's more important than ever for us to rally support behind funding our local journalism. You can help by participating in our "I Support" program, allowing us to keep offering readers access to our incisive coverage of local news, food and culture with no paywalls.
Make a one-time donation today for as little as $1.