Alexander Sage Oyen, composer of Discount Ghost Stories: Colorado. Courtesy of Alexander Sage Oren
The topic of shuttered theaters in the age of COVID-19 raises so many stories, and they’re not just the sad ones of canceled seasons and furloughed crews. Those disasters have happened and could last until the pandemic eases — but we also hear about bold, creative ideas: dances in display windows, virtual shows, or companies embracing a whole brave, new socially distanced world of immersive theater, viewed from cars or on the other side of a plastic barrier.

Boulder’s Local Theater Company took a different tack by creating the Local Love Relief Fund fundraising platform while going full-focus on developing new plays and breaking theatrical barriers, a major goal for the company in any season. To that end, the online series Living Room Local can draw a crowd from across the nation for intimate chats with playwrights, actors and theater celebrities. Courtesy of Local Theater Company
But now Local has come up with something we haven’t seen yet in the metro area: a repurposing of the excellent score from last summer’s outdoor show Discount Ghost Stories, which digs up the lives of lesser-known figures from Colorado history through music. Earlier this week, Local released Discount Ghost Stories: Colorado, a streaming album of that music online, with help from a few famous friends from around the world. And they pulled it together in record time.

Local’s associate artistic director, Nick Chase, says the entire project began at the beginning of the COVID lockdown in March and was fully recorded by August in an unorthodox way — by a gang patched together by the Internet. The material, Chase notes, was perfect for the medium, as it resembles a musical score and can be enjoyed as such without a visual/dramatic component.

“The idea of doing this as a benefit for the Local Love Relief Fund came up in response to the pandemic. It was the right time to figure out the recording,” Chase adds. That began with New York-based composer Alexander Sage Oyen, who wrote the original music and lyrics for Discount Ghost Stories. He reached out to a quality well of singers, music engineers and musicians, looking for a cast that would make an impression.

“Some of the cast are friends I’ve worked with for many years,” Oyen notes. “But there are also exciting actors on the recording whom I never dreamed of working with. It was an opportunity helped by the pandemic, in a weird way, to get to reach out to people I don't have connections with and create this weird recording.” Jakob Reinhardt, producer of Discount Ghost Stories: Colorado in his studio in Germany.
Courtesy of Local Theater Company
The talented pool of people Oyen sourced for the recording include Broadway performers LaChanze (Tony Award, The Color Purple), George Salazar (Be More Chill), Lesli Margherita (Olivier Award, Zorro) and Michael James Scott (Aladdin). Notably, German producer and musician Jakob Reinhardt, a familiar face in the pit of many a Broadway tour, signed on to mix the recording. But he'd returned to his home in Freiburg, Germany, to wait out the pandemic and, as it turned out, master the album’s tracks abroad. In all, the players on the album span the globe from New York and L.A. to London, Germany and Australia.

Colorado-based musician Erik Fellenstein, who played violin in the original production, contributed his original string arrangement and performance. Three drummers, all working in their home studios, were also spread across the map, and Oyen just laughs about his own role, mainly performed in his studio in Queens, New York: “My instruments have been traveling a lot more than I have the last few months!” 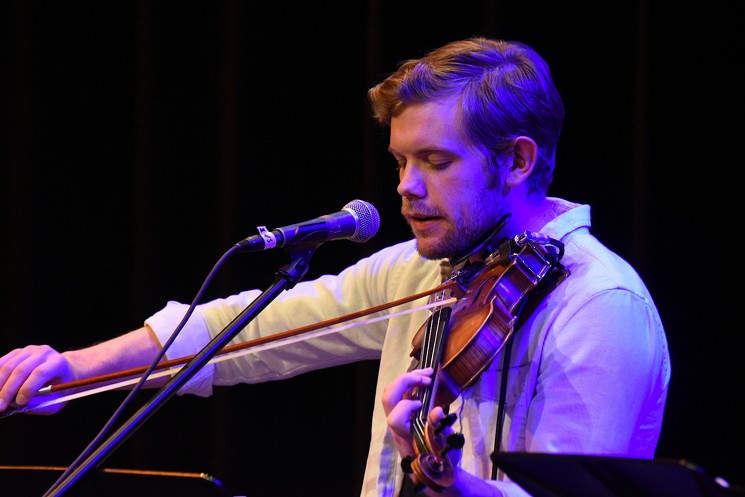 Violinist Erik Fellenstein, string arranger and performer for Discount Ghost Stories: Colorado.
Michael Ensminger
Desppite the international flavor of the actual recording, one reason that Local went with this particular score as a benefit lies a lot closer to home than most of the recording cast. “What we love about the creation of this album is that the first performance ever of Alex's score was in Boulder, Colorado,” Chase says. “This is a piece of music that changed life in Boulder. We are proud to be in Colorado. Some of us were born here, some moved here, but we’re all proud to make art here.”

Local executive director Alison Palmer chimes in. “As a company, we are about building relationships with artists and supporting creative endeavors — and we’re all working together as a community to make sure that happens.

“Proceeds from the album are going to fund the development of ten new plays,” she adds. “This year Pesha Rudnick, our founder, just said, ‘Let’s go big and stay home. Let’s go to the playwrights and tell them we want to develop their work. We have to be ready with new plays in the pipeline. Theater must survive.'”

Hear a preview and access Discount Ghost Stories: Colorado, with links to Spotify, Apple Music and other platforms. All proceeds from streams of the album will go toward Local Theater Company’s Local Love Relief Fund (LLRF), launched in March 2020 in order to sustain basic operations, invest in new technology to live-stream classes and events, and continue to employ creative professionals in Colorado and across the United States during the COVID-19 crisis.
KEEP WESTWORD FREE... Since we started Westword, it has been defined as the free, independent voice of Denver, and we'd like to keep it that way. With local media under siege, it's more important than ever for us to rally support behind funding our local journalism. You can help by participating in our "I Support" program, allowing us to keep offering readers access to our incisive coverage of local news, food and culture with no paywalls.
Make a one-time donation today for as little as $1.