Meet DJ Bedz, the Official DJ of the Denver Nuggets

DJ Bedz is the official Nuggets DJ. Courtesy of DJ Bedz
Perched high above the basketball court, nearly in the rafters, Cassidy Bednark watches Pepsi Center workers prepare for another game: the Nuggets versus the Clippers. Bednark is nestled into his signature yellow and powder-blue DJ booth. Going over his playlist before tip-off, Bednark — who is the official Denver Nuggets DJ — steps behind his turntables and becomes DJ Bedz: The White Shadow, ready to rock the stadium.

Dressed in Nuggets gear from head to toe, Bednark is not just the team’s DJ; he’s a lifelong fan. Born and raised in Boulder, he’s the guy responsible for the ascending organ sounds and the sampled “Defense!” chants heard over the booming system as players dribble up and down the court. With the push of a button, he triggers the infamous bleachers stomp from Queen’s “We Will Rock You.” If the crowd is the orchestra, DJ Bedz is the maestro.

“I’ve been with the Nuggets for fourteen years. My first year was the year they drafted Carmelo Anthony and changed the uniform colors to baby blue, so it’s easy to remember,” says Bednark. “I’ve been here so long that they trust me here.” That trust goes straight to Bednark’s ability to play the right kind of music at the right time. So much of the pro game is about atmosphere, and without the proper soundtrack, the spectacle can fall apart.

A few years ago, the Nuggets played a 1970s-themed throwback game: Players hit the court in old-school jerseys, the jumbotron broadcast in black and white, and just like back in the day, there was no music on the court. “Once the game started, it was dead silent. It was so weird and awkward,” says Bednark with a laugh. Without his meticulously timed injections of pre-programmed air horn, hand claps and clips of tracks by Stevie Wonder, DJ Khaled and the Temptations, the atmosphere fell flat, and it was clear: These days, a good game needs a great DJ.

Great DJs know their audience, and for Bednark, knowing when to dictate the crowd’s response and when to step back and let fans create their own sonic flow is a delicate balance.

“There’s a certain lowest-common-denominator aspect to this, and I don’t mean that in a derogatory way. I mean that in terms of in a place like a basketball game, you don’t want people to have to think,” he explains. “You want to facilitate comfort instantaneously, and if that means they hear ‘Mony Mony’ for the nine-millionth time, that’s fine. I think it’s great. I embrace that.”

How to facilitate comfort for large groups is something Bednark thinks about constantly. He deejays for the Denver Broncos, throws down music for the CU Buffs, does the club-DJ thing regularly at Press Play in Boulder, can be found spinning records at Ameristar Casino in Black Hawk, and was an official DJ for the 2016 Olympics in Rio de Janeiro. Oh, and his voice may be even more familiar than his mixes, as Bedz has been a radio personality in the Denver metro area for nearly twenty years.

Currently, he’s the mid-day man at Flo 107.1, playing throwback R&B and hip-hop weekdays from 10 a.m. to 3 p.m. A mixmaster at heart, he delivers a signature, commercial-free mix each day at noon. His show might be the only place on contemporary radio in Colorado where listeners can hear a DJ scratch live. As a radio personality, Bedz always finds a way to connect with local listeners, offering up a daily “This or That?” choice between two songs he’ll play based on social-media response. He’ll put an OutKast track in competition with a Cypress Hill song, face off Digital Underground against DJ Quik, offer a Mariah Carey single alongside a Destiny’s Child hit. Everything about Bednark’s on-air style is interactive and audience-driven, and a lot of that comes from feeling supported and encouraged by the station to be himself behind the soundboard.

“They don’t micromanage me; I can play a KRS-One or Public Enemy song because I feel like it,” says Bednark. “Again, it’s about familiarity. There are certain records that test well and that we have to play. We have to play Warren G regularly; we just do. But when you can pick your spots — like if I want to play an old Beastie Boys cut, I can — it gives some legitimacy and street cred as a station.”

Over the years, Bednark’s voice and mixtape-style deejaying have been heard over the Colorado airwaves, on KS 107.5, Hot 107.1, 95.7/The Party and XM Radio. A DJ since his college days, when his mom bought him a turntable, Bednark’s first-ever paid gig was in 1996 at a sorority party at his alma mater, Occidental College, in Los Angeles. He pieced together a basic DJ setup, packed up his single crate of records and was ready to go. The flier for the infamous dormitory rager read: “Play That Funky Music Featuring White Shadow Productions’ Cass Bedz.”

The Bedz moniker was borrowed from his father, who also went by Bedz in high school. The addition of “the White Shadow” came along soon after Bednark, who had just begun his deejaying career, realized that people were confusing him with DJ Benz.

DJ Bedz
“Phonetically, people don’t hear ‘Bedz’ and remember it. Even when I was young and didn’t quite understand branding, I had to attach something else to the name. I thought the White Shadow was cool, and I had watched the show The White Shadow in the ’80s,” says Bednark. But it went deeper than that. “As a kid who grew up with a certain degree of understanding of one’s privilege, I thought it was important to acknowledge the fact that I was white. It was this cool name that had some cachet, but at the same time, it was me being transparent about the fact that I was a white guy participating in a black art form.”

Forever a disciple of hip-hop, Bednark gives credit to his open-minded parents for helping him explore his musical curiosity at a young age. He remembers his mom buying him a Geto Boys record when he was in middle school. “She was all about exposing me to things and then explaining the context and understanding what was going on in music instead of blanketing it and saying, ‘No, hip-hop is bad.’”

After graduating with a degree in music composition (Bednark is a classically trained pianist), he headed home to Colorado and discovered that Denver was the perfect middle ground between the L.A. party scene he left behind and homogenous, middle-class Boulder. The self-taught scratcher and mixer found plenty of opportunities to play at now-bygone Mile High City hot clubs, landing his first spot at Decades, a sixteen-and-up nightclub in Lakewood. He also spun records at Club Bash, Suite 200, Martini Ranch, the Purple Martini family of nightspots, and local favorite Tulagi in Boulder. But it was friend and fellow mixmaster DJ Chonz who led Bedz to the radio masses and, eventually, the basketball court.

“I was sort of passively deejayinging for fun,” says Bednark. “I was deejaying at some clubs and making mixtapes. But it was Chonz who helped me get in as a weekend mixer at KS 107.5 in 2001.” 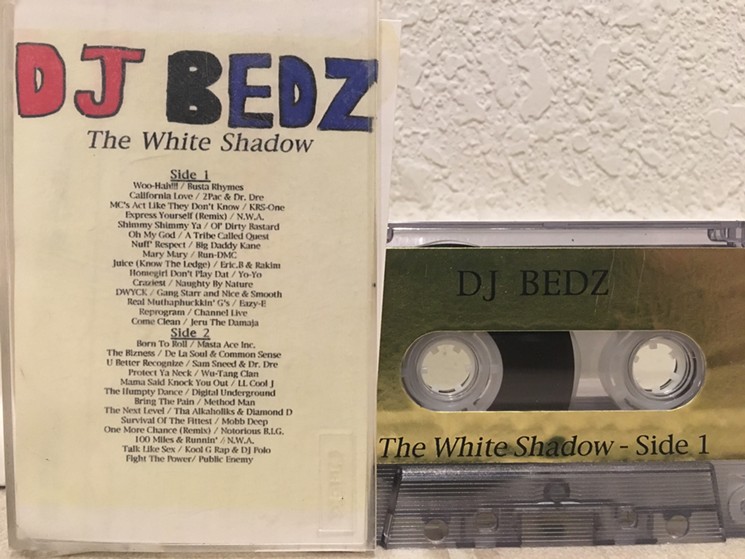 DJ Bedz
The following year, Chonz had picked up the gig as the Nuggets DJ, but it didn’t quite stick. Bednark says his friend and mentor wasn’t really a “basketball guy” — but Chonz knew Bedz was a big fan of the Nuggets and had played basketball in high school and college. He handed the position off to Bedz, and the rest is history. “It was the marriage of two things I love: music and basketball,” says the DJ. “I owe a huge debt of gratitude to Chonz — I always have. It was one of those turning points where I realized this could be a job. I’m a pretty lucky dude.”

Underneath his humble and smiley exterior, DJ Bedz may be a lucky guy. But he’s also one of the hardest-working DJs in Colorado, and has the turntable history to prove it.

“If you’re not in love with deejaying, it’s not going to work out in the end, because it doesn’t make any sense. It’s not logical to spend all of your money on records unless it brings you some sort of real gratification. Luckily for me, it did.”

Bree Davies is a multimedia journalist, artist advocate and community organizer born and raised in Denver. Rooted in the world of Do-It-Yourself arts and music, Davies co-founded Titwrench experimental music festival, is host of the local music and comedy show Sounds on 29th on CPT12 Colorado Public Television and is creator and host of the civic and social issue-focused podcast, Hello? Denver? Are You Still There? Her work is centered on a passionate advocacy for all ages, accessible, inclusive, non-commercial and autonomous DIY art spaces and music venues in Denver.
Contact: Bree Davies
Follow:
Twitter: @cocodavies