Itchy-O returns October 31 with Hallowmass. https://itchyo.com/
Since its very first DIY performance in Denver in 2009, Itchy-O has done some amazing shows, but one by the avant-garde band last March at Meow Wolf in Santa Fe was particularly legendary.

"It was the most epic show we've ever had in our venue, just the perfect band and spectacle for Meow Wolf," says Meow Wolf CEO Vince Kadlubek, a founder of the decade-old arts cooperative that blew up after George R. R. Martin provided the financial means that allowed the group to turn an old bowling alley in Santa Fe into an incredible immersive arts experience that has attracted hundreds of thousands of visitors since it opened in 2016. During its performance there, Itchy-O not only filled the stage, but twisted through the venue. "It just blew our minds," adds Kadlubek. "They created a transformative experience for people when they were here. People are still talking about it."

"I was there, out in the lobby managing the merch," says Travis Volz, Itchy-O publicist. "Everybody I spoke with was blown away; huge group of folks had traveled down from Colorado, and Itchy-O gained a new fan base in Santa Fe, too."

Itchy-O could already count Meow Wolf among its fans, and the feeling is mutual. "We love what they're doing, and they've been a big supporter of us," says Volz.

Such a big supporter that Meow Wolf, which is looking at opening a venue in Denver and has had an increased presence in this city, is now sponsoring Itchy-O's third annual Hallowmass show, set for Tuesday, October 31, at Summit Music Hall. And Meow Wolf also created a brand-new video of Itchy-O, the group's second this year. ("Gallow's Disco" was released this summer.)

"The more we get to know Denver, we're realizing how Itchy-O is this really special act we just want to support," says Kadlubek. "There's a level of ambition and uniqueness to it that is rare in the world of commercial or semi-commercial arts."

Like Meow Wolf, Itchy-O has exploded over the past decade. Although few of the first wave of thirteen performers remain, a solid crew of more than 24 members has consolidated over the past five years; depending on the venue, shows can feature as many as forty performers. Those shows take Itchy-O around the world, to Tasmania for the 2016 Dark Mofo Fest and Atlanta for an annual Halloween festival at the Goat Farm. 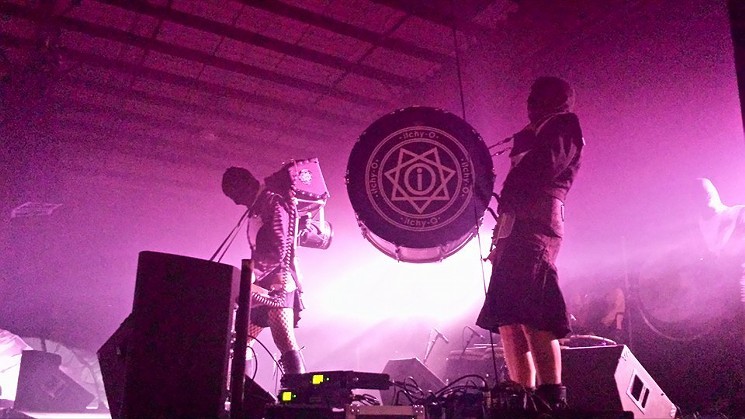 Hallowmass 2015.
https://itchyo.com/
But it was the All Souls Procession in Tucson that persuaded the group to create Hallowmass, an all-inclusive event where anyone of any faith, from any walk of life, can pay respects to things that have touched their lives. The event is almost a "temple for the misfits," Volz explains, "a safe place for people to pay their respect for people and things and pets. The group takes this very seriously. It's a celebration, but also a time to reflect."

For the first Hallowmass three years ago, Itchy-O partnered with the Denver Center for the Performing Arts for an event at the National Western Complex. The response was so strong, Volz says, that there was a "unanimous decision among the group that it would be a tradition."

The second edition, at the Gothic on a Monday, sold out. "We were pleased with that, coming off a Halloween weekend," Volz recalls. "Hopefully that will be the case at Summit Music Hall." And judging from the strong presales, this Hallowmass might be a shut-out, too. Which means tardy fans could miss out on the show, which promises some surprises.

Although Itchy-O likes to stick with tradition, "every year they add different components to their performance," Volz says. "There will be a huge twist with this performance." And although he'll again be setting up merch at Summit, with any luck, Volz will be able to see the show, twists and all, with Itchy-O pandemonium that  promises to "wake the spirits, melt your minds, and shake your costume-clad tail."

"We're just really excited to be back from the road, in our home city, in front of our fans," Volz says. "And excited to be featured in Meow Wolf's video." See it here: