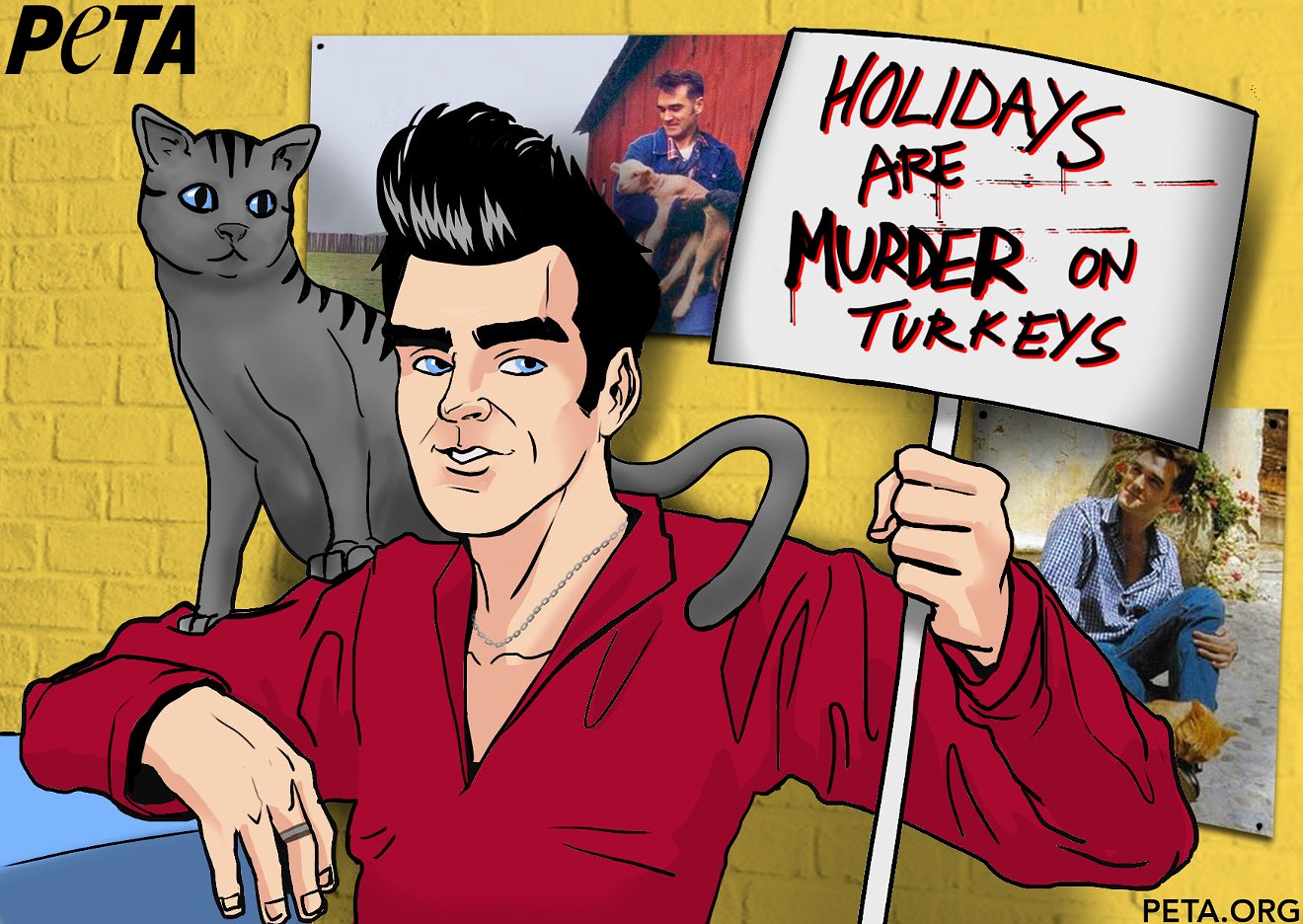 Morrissey and PETA are joining forces to advocate for animals during the holiday season. Morrissey / PETA
Morrissey and the animal-rights group People for the Ethical Treatment of Animals plan to send his concert-goers a pro-vegetarian message, starting tonight, November 20, at his show at the Paramount Theatre.

The campaign, which has been in the works for months, is slated to be released in the wake of the singer's interview with the German publication Der Spiegel, in which he defends both Kevin Spacey and Harvey Weinstein from allegations of sexual assault.

The singer's remarks incurred a firestorm of criticism from celebrities on social media.

Outside tonight's Denver concert — just days before Thanksgiving — and at seventeen others nationwide over the next weeks, PETA activists plan to handout fliers, seen above, with an image of Morrissey cooly hanging out with animals, holding a sign that states "Holidays Are Murder on Turkeys."

According to PETA, Morrissey initiated the collaboration in hopes of convincing others to join his efforts to save animals.

"We hope this unique artwork will end up on refrigerators across the country as a reminder that animals shouldn't be sacrificed for holiday feasts," said PETA Vice President Dan Mathews in a statement.

Morrissey, who once hosted a PETA vegetarian Thanksgiving dinner to which a turkey was invited as a guest of honor, and the animal-rights organization have come under fire for likening meat eating to the Holocaust.

The singer has also compared meat eating to rape, drawing criticism that he fails to understand the trauma of sexual assault and minimizes the experiences of survivors.

In a 2014 Q&A session with fans, he stated, "I see no difference between eating animals and paedophilia. They are both rape, violence, murder. If I'm introduced to anyone who eats beings, I walk away. Imagine, for example, if you were in a nightclub and someone said to you 'Hello, I enjoy bloodshed, throat-slitting and the destruction of life,' well, I doubt if you'd want to exchange phone numbers."

The singer has blasted Al Gore for serving meat at an event to address climate change and refused to allow venues to sell meat at concerts.

PETA, like Morrissey, has been lambasted for likening meat consumption to rape.

Morrissey turned down an interview with Westword about his new campaign and concert. PETA has not responded to immediate messages about how Morrissey's comments might impact the campaign.