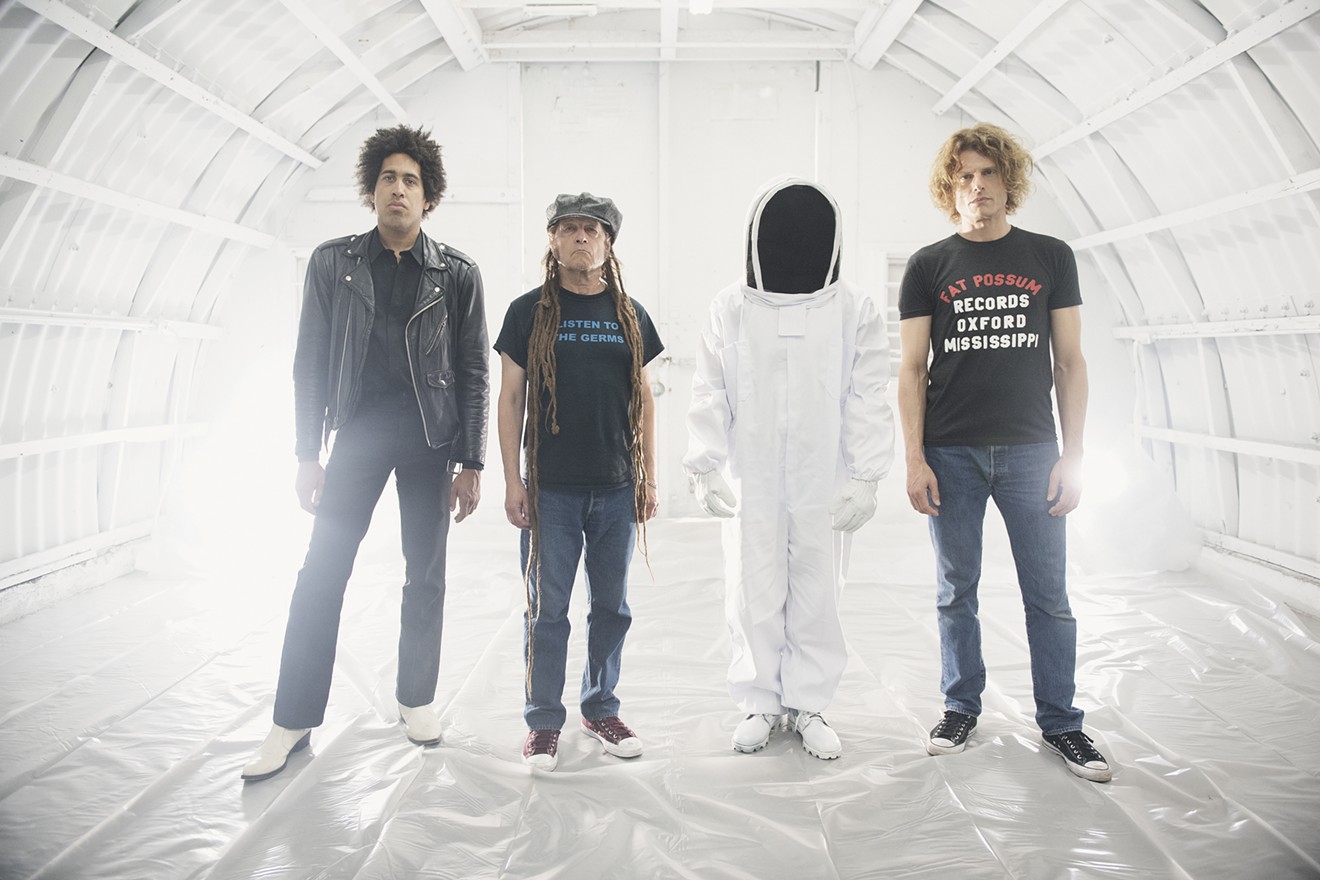 OFF! Jeff Forney
As Keith Morris and Dimitri Coats prepared to write the songs on Free LSD,  their band OFF!’s third full-length album, they decided: "To hell with expectations!" The band had already released two well-received full-length albums, as well as several EPs of raucous punk songs that evoked the early days of American hardcore. But frontman Morris, who's been in such seminal punk bands as Black Flag and the Circle Jerks, says the band is pushing the punk boundaries with its new work.

“When you are a part of a genre, there are certain things expected of you,” Morris says. “We just said, ‘Fuck that. Screw that.’ I was in Black Flag. I was in the Circle Jerks. The first couple of OFF! records all fall into that category, and it’s like, ‘Come on, man. We’ve got to go someplace else.'”

OFF! plays the hi-dive in Denver on Thursday, December 8, and Friday, December 9. (The show on Friday is sold out.)

Free LSD, which showcases the more experimental side of the band, is now available, and an accompanying feature-length movie of the same title will make its debut as the closing selection at the 29th Slamdance Film Festival next month in Utah. It’s all based on conspiracy theories — of which Morris is a fan — and whether you believe them or not is of no consequence.

Morris adds that the movie, written and directed by band co-founder Coats, has funny moments, serious moments, and good acting and bad acting from a big cast. He sees it as akin to the midnight movies of the past. Overall, it’s meant to be fun in the spirit of 1984’s Repo Man, in which Morris famously cameos. He hopes Free LSD can stand elbow to elbow with Repo Man, which he considers one of the greatest films ever made.

He also has a conspiracy theory-focused podcast, Blowmind Show, that he hosts with his neighbor, Thelonious Monster drummer Pete Weiss, whom Morris calls the “social butterfly of Hollywood, California.” The duo tackles subjects including mind control, the Central Intelligence Agency and LSD, Britney Spears singing in tongues, and Nazi scientists. Morris also watched hours and hours of related documentaries to mine more material. This all fed into the lyrics for the album, as well. “Dimitri said, ‘Keith, you’ve already written the lyrics for this album. All you need to do is go through all of these things that you’ve said on your podcast and choose the best, tastiest lines,’" Morris says.

Morris explains that when he and Coats set out to write new material, they generally listen to rock music, bands such as Blue Oyster Cult, the Damned and Stiff Little Fingers. Guitarist Coats usually dives into old Black Flag and Circle Jerks records, as well, to keep some thread of those bands in OFF!’s sound.

They eschewed those influences for Free LSD, taking in a wide swath of different music to get the creative juices flowing. The starting point in this more experimental turn was Sgt. Pepper’s Lonely Hearts Club Band, an early favorite of Morris's — in fact, the first record he ever owned. He impressed upon Coats that this was an influence he wanted to fold into the new OFF! album.

“You listen to that, and you listen to it with headphones, and it’s just moving back and forth and going to all these places, and Mellotron and orchestra,” Morris says. “I really wanted to get into that.”

He adds that Coats is a “closet industrial music freak” and insisted that he listen to Einstürzende Neubauten, a German experimental band. Morris owns some of that group's albums, but it’s not a regular go-to musical scenario for him. “We watched some ​​Einstürzende Neubauten live,” Morris recalls, “and then half an hour later we're watching Miles Davis playing in front of Herbie Hancock’s Headhunters.”

But their research didn't stop there. The two solicited further advice from a friend, Enid Snarb of Man Is the Bastard and Bastard Noise — music that Morris lovingly says sounds like “sandpaper on your ears” — who suggested they locate a relatively obscure Ravi Shankar album from the 1970s. They ran down a copy on eBay and began playing that, too. Morris also recalls listening to industrial band Hunting Lodge, Throbbing Gristle and another Belgian industrial band whose name he forgot. They also took in a ton of jazz — Albert Ayler, John Coltrane, Donald Cherry, Charlie Haden and Ornette Coleman.

This is the band’s first full-length since 2014’s Wasted Years. OFF's lineup has shifted over the past few years, as original members Steven McDonald and Mario Rubalcaba departed and were replaced by bassist Autry Fulbright II, formerly of …And You Will Know Us by the Trail of Dead, and Justin Brown, an accomplished jazz drummer who has worked with artists including Thundercat and Herbie Hancock.

Morris says the work he has done with OFF! has been the most fulfilling, creatively speaking, and offers him a third career chapter after fronting two legendary punk bands. As for whether another OFF! record could happen, he’s not sure. Coats, who directed the upcoming Free LSD movie, feels an urge to transition into the world of film. It’s an ongoing conversation, as he won’t continue OFF! without Coats, whom he considers the engine driving the band. They set a high bar for themselves on Free LSD, and the question is: Do they want to try again?

“I’m up for the challenge,” says Morris. “I’m already writing lyrics. I’m already thinking about different things, but if he chooses not to want to do this, I will value his decision, because we’ve been on a run.”

OFF! with Zulu, Thursday, December 8, and Friday, December 9, 9 p.m., hi-dive, 7 South Broadway. Tickets are $20.
KEEP WESTWORD FREE... Since we started Westword, it has been defined as the free, independent voice of Denver, and we'd like to keep it that way. With local media under siege, it's more important than ever for us to rally support behind funding our local journalism. You can help by participating in our "I Support" program, allowing us to keep offering readers access to our incisive coverage of local news, food and culture with no paywalls.
Make a one-time donation today for as little as $1.