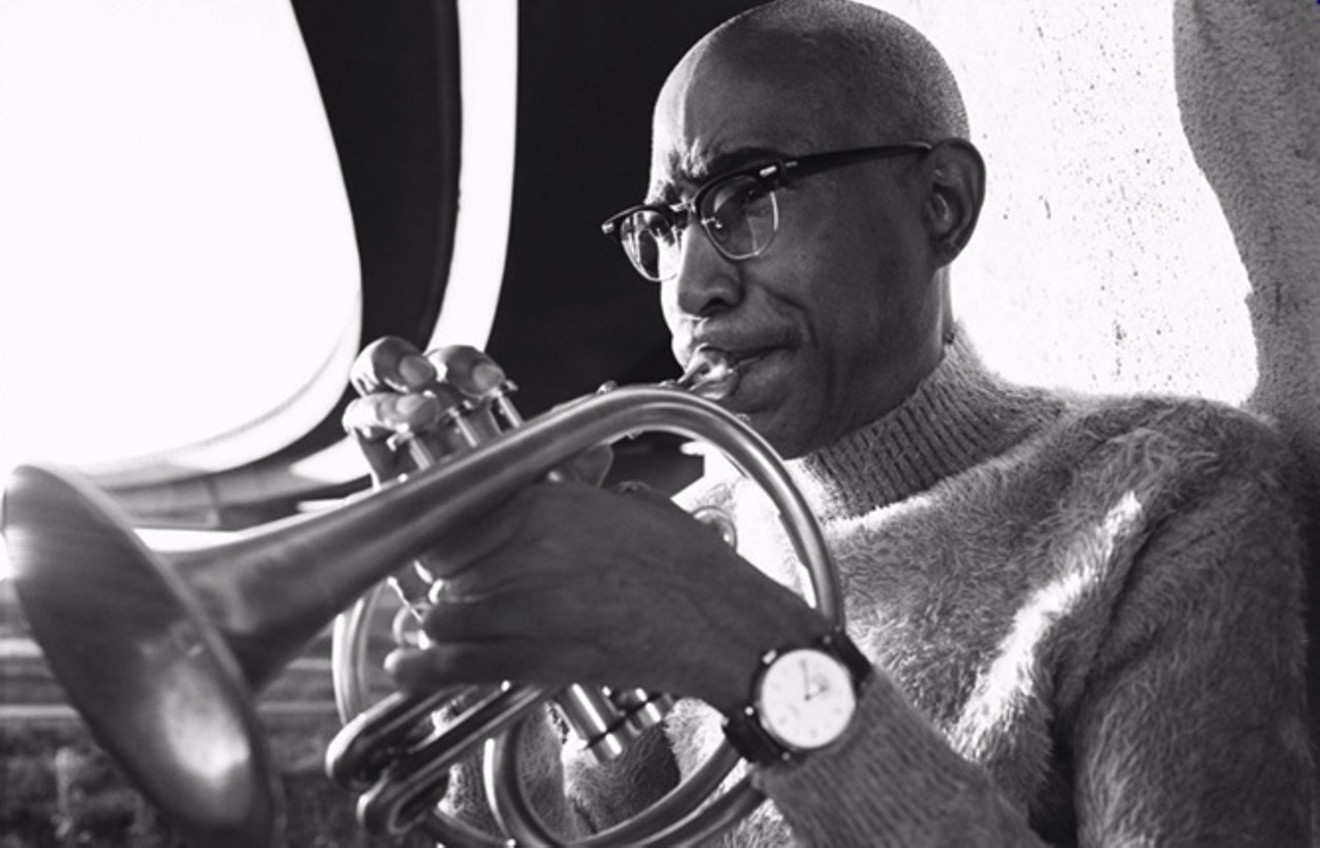 Ron Miles died on March 8. Elliot Ross
Legendary Denver jazz cornetist, composer and educator Ron Miles died at the age of 58 on March 8. Miles’s manager and producer, Hans Wendl, said the cause of death was complications from polycythemia vera, a rare blood disorder.

In October 2020, Miles released Rainbow Sign, his debut for Blue Note Records, an album mostly written when his father, Fay Dooney Miles, was near the end of his life. The album showcased Miles's heartfelt compositions and moving, intuitive interplay with guitarist Bill Frisell and drummer Brian Blade (both of whom have made other albums with Miles), as well as bassist Thomas Morgan and pianist Jason Moran.

Miles told Westword that he named the album Rainbow Sign for a few reasons. For starters, rainbows show up in the Book of Revelation when Christ returns and his skin looks like a jasper stone, which has multiple colors. Miles said that although people feel the need to put everyone in a box, including what race they are, “the idea of a rainbow is that it's this thing that takes us outside of our expectations and our limitations of what we can see.”

The album title also refers to how rainbows are sometimes seen as a passageway from heaven to earth.

“Those who have left us can come back when we see a rainbow and visit us, and we can interact with them through this rainbow,” Miles said. “Also, in modern times, to the parlance of LGBTQ stuff and rainbows and inclusion and the courage to love in the face of adversity. It's all tied together in this.”

“He was a sweet, soulful man whose character was reflected in every exquisite note he played,” Was says. “We are heartbroken to lose him so soon, but he will live forever through the music he’s left behind for us.”

Miles, who was born on May 9, 1963, in Indianapolis, moved with his family to Denver when he was eleven years old. He was a musician-in-residence and previously director of jazz studies at Metropolitan State University of Denver, where he had given master classes on composition. He taught that the creative process can be mysterious, often evoking feelings more than anything concrete.

“I think that it's not really technical as much as it is emotional,” Miles said in 2020. “Like some emotional place where these songs just seem to help you make sense of what you're going through at that time.”

A masterful composer and an equally gifted musician, Miles shared a long history with Frisell, a former Denverite who’s now based in Brooklyn. In 2014, they both talked with Westword about Miles's album Circuit Rider, which also included Blade on drums and was the second album they had done as a trio.

When Frisell told Westword about the decades he’d known Miles, he chose his words thoughtfully, sometimes trailing off before starting again. He told the story of a cassette tape he got from Miles, delivered by their mutual friend, producer Hans Wendl. Along with his music, Miles included a note asking if Frisell wanted to record with him. The guitarist couldn't make the time then, but he wrote Miles a postcard expressing admiration for his horn playing, which Miles eventually got framed.

Frisell said he remembered exactly where he was the next time he heard Miles’s rich, full-bodied and lyrical music. Living in Seattle at the time, Frisell was driving up a hill when a Duke Ellington song played by Boulder-based saxophonist Fred Hess came on the radio. A trumpet solo cut in, and Frisell knew immediately who it was.

When he got home, he found the tape with a phone number on it. He called Miles, and they talked for a long time. They learned that they both knew Dale Bruning and that they both had gone to East High School.

"Just from that conversation, I knew we had to play together," Frisell said.

Miles and Frisell played their first show together on October 8, 1994; they recorded on each other’s records and performed many times since then. Miles, who was about twelve years younger, saw his time in a few of Frisell's bands in the mid-’90s as something of an apprenticeship — something that was never part of his formal music studies at the University of Denver and the Manhattan School of Music.
"When I came up in the ’80s, it was almost like you didn't have to apprentice anymore," Miles told Westword. “It was like you were supposed to get a record contract at twenty, get your own band and go out there and do that. It got a little lost.

"There's a reason you apprentice with somebody," he explained. "You see them put sets together. You see them for weeks on end, playing songs and dealing with stuff. You can't learn it in school, you can't read about it in a book, you have to go out there and do it. So my time to do that was being in his band."

Frisell said that he never thought of Miles as an apprentice.

"No, he's been my teacher the whole way,” he said. “And I still want to stop all this rigmarole and just sign up for his jazz history class. ... He always felt like a master to me."

While Miles and Frisell learned things from each other, there was a music kinship and sensibility there that can be heard on any of the recordings they made together.

"He has such an effect on everybody in the band," Frisell said of Miles in that 2014 interview. "I've played with the same people, the same song when he's there and when he's not there, and there's an incredible power, like a rhythmic clarity power, in everything that he plays. It sort of just brings everything into focus. ... I'm talking about one of those things that gets almost beyond. You can't really analyze it. He puts a spell on things."

Miles and Frisell, along with Blade, Moran and Morgan, would go on to team up on Miles’s 2017 album, I Am a Man, which touches on social justice themes like Black Lives Matter. Its title refers to the “I Am a Man” signs that sanitation workers held during a strike in Memphis in 1968.

“My take is a guy in his mid-fifties reflecting on what’s going on and what has gone on before,” Miles told Westword in 2017 when discussing the album. “This is my chance to make a statement, because we don’t have, you know, talking heads out there in the community who are my age. This is my chance to reflect on where we are as far as racial relations. Where we’ve come. I was alive in 1968. I was just a little kid, five years old, but I remember Dr. [Martin Luther] King’s funeral on a black-and-white TV. That’s just my chance to comment on that and do this music.”

Miles’s father, who died in 2018, was a lifelong mentor to his son and instilled in him his love of jazz. Before Miles was inducted into the Colorado Music Hall of Fame as part of its Jazz Masters & Beyond class in 2017, he told Westword that he remembered improvising for the first time while in the school jazz band at East High School, where he graduated in 1981.

He added that that was his first time composing without even knowing it. He’d soon realize that improvisation and composition weren’t really different, but that one’s just more sped up than the other. While he was also transcribing solos by jazz masters, Miles realized that he was writing something in his own language — “as small and limited as my language was at that point, but realizing even with that there was something worthwhile that I could present to the public that was meaningful.”

During Miles’s senior year in high school, he and fellow East High student and now well-known actor Don Cheadle went to Red Rocks to see legendary trumpeter Miles Davis, who had recently come out of a five-year retirement.

While he was at East High, Miles said, the school’s band director, Jerry Noonan, would leave copies of Downbeat magazine in the East choir room. Miles would go into the room every month and read about jazz players like Clifford Brown and Art Blakey, who released albums on Blue Note, and then take three buses to Jazz Record Revival to buy the albums.

Local saxophonist Fred Hess, who died in 2018, taught Miles about ambitious Blue Note albums such as Sonny Rollins's A Night at the Village Vanguard, Eric Dolphy’s Out to Lunch and Wayne Shorter’s JuJu. In 2020, Miles told Westword that he hoped to hand down that legacy to younger musicians from Colorado and show them that they, too, can be represented by a major label like Blue Note.

Miles is survived by his wife, Kari Miles, daughter Justice Miles, son Honor Miles, mother Jane Miles, brother Johnathan Miles, sisters Shari Miles-Cohen and Kelly West, and half-sister Vicki M. Brown.
KEEP WESTWORD FREE... Since we started Westword, it has been defined as the free, independent voice of Denver, and we'd like to keep it that way. With local media under siege, it's more important than ever for us to rally support behind funding our local journalism. You can help by participating in our "I Support" program, allowing us to keep offering readers access to our incisive coverage of local news, food and culture with no paywalls.
Make a one-time donation today for as little as $1.