Denver's Cameron United Methodist Church plays host to a number of outside organizations, including Denver Retro Grass, a bluegrass jam band that is open to musicians of all skill levels. On Sunday the group will host what it calls "Denver's Largest Bluegrass Jam." Players of all skill levels are invited to join in. Denver Retro Grass
As a member of Denver’s Cameron United Methodist Church, Catherine Teutsch wants to make sure the building her congregation calls home will still be standing for another hundred years or more.

But as a musician, she just wants to jam.

The good news for Teutsch is that both are more likely thanks to a unique partnership between the church and area musicians from Denver Retro Grass, a bluegrass jam group. On Sunday, Cameron will host what the group hopes will be a record for Denver’s largest bluegrass jam in history.

“We are going to count, but as a volunteer, I haven’t checked into how to get it done officially,” says Teutsch, chuckling. “It’s a way to kind of get people to support music and the church, so we’re going to call it that until someone tells us otherwise.”

It’s not the first time the church has held the event. A similar jam in 2018 also raised money for church maintenance and restoration. This year, with upkeep costs again hitting the hundred-year-old building harder than ever, Teutsch says the idea resurfaced. With regular meetings of Denver Retro Grass taking place at the church twice weekly — 7 to 9 p.m. on Tuesdays and noon to 2 p.m. on Sundays — a fundraising musical event was an obvious answer. 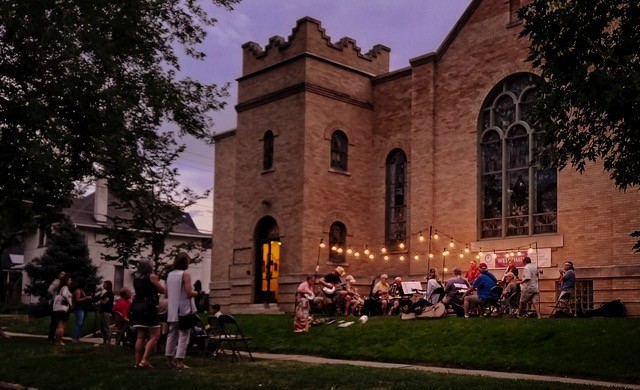 In the warm months, Denver Retro Grass sets up outside Cameron United Methodist Church for its jam sessions,.
Denver Retro Grass
The event — scheduled for 11 a.m. to 2 p.m. Sunday, September 22 — is open to anyone who plays an instrument, sings or just wants to see a potentially record-setting bluegrass jam. The music, guitar tablature and lyrics for all the songs will be projected on a wall inside the church for all to follow. Participants are encouraged to make a $10 donation, which will be used for much-needed repairs to the building.

Retro Grass is a loose group of professional and amateur musicians who play at various sites around Denver. Teutsch says the group plays mostly traditional bluegrass standards from musician Bert Casey’s Bluegrass Fakebook, but occasionally branches out to include popular songs by the likes of the Who and John Denver, depending on the whims of the gathered players. The goal is less about displaying musical proficiency than having fun and welcoming anyone who wants to make music.

“We play a lot of things in the key of G (the most common key for bluegrass), so it’s really accessible,” Teutsch says. “Cameron is a beautiful building but doesn’t look welcoming. We just want to let people know it’s an active church and active community meeting place.”

It’s working. Last year the jam group raised $5,000 for the church, and Teutsch says this year it could do even better.

“I’d bet that puts us near $8,000,” she says. “When you consider we only have $10,000 in the bank, that goes really far. It certainly helps keep the heat and lights on and helps fix whatever issues come up.”

Denver Retro Grass
One of the joys and obstacles of a jam of this size is that it's open to all.

"What happens in this jam group is that we help each other," says Teutsch. “It’s a little bit of free music education. The group is very generous, to help each other learn. Non-judgmental, very open, warm and welcoming.”

Tom Connole, a guitarist and the “jam master” for this year’s record attempt, says having so many people of varying skill levels playing together is challenging, but all part of the fun.

“We have some advanced players, but they come in and join us at our level,” Connole says. “We just try to accommodate people of every skill level. It’s a way that people who enjoy this kind of music get to be involved.”

Five years ago, Christy Ramee had never played music. But after she won a guitar in a raffle, she started looking for an inviting place to play and learn. Retro Grass, she says, fit the bill.

“I’m the least skilled in the group by far,” she says. “I just showed up and got a very warm welcome. It’s heartwarming they are so open to someone like me. That’s what music is all about.”

Everyone who attends the jam, regardless of skill level, will get a chance to pick a song or add a verse, Connole says, adding that that can mean as many as seventy to eighty musicians and singers playing at once.

Denver’s Largest Bluegrass Jam will be held at Cameron United Methodist Church, 1600 South Pearl Street, on Sunday, September 22. Doors open at 11 a.m. The jam runs from 12:30 to 2 p.m. For more information, visit the Cameron United Methodist Church website.
KEEP WESTWORD FREE... Since we started Westword, it has been defined as the free, independent voice of Denver, and we'd like to keep it that way. With local media under siege, it's more important than ever for us to rally support behind funding our local journalism. You can help by participating in our "I Support" program, allowing us to keep offering readers access to our incisive coverage of local news, food and culture with no paywalls.
Make a one-time donation today for as little as $1.