Credit: TARONA
The last time Kneebody played in Denver, in February 2016, the jazz collective dropped in with a frenetic, face-melting performance at the Oriental Theater with electronic beat master Daedelus.

"That was a really cool departure for us," says trumpeter Shane Endsley about the band's collaboration with the electronic musician, which included releasing an album with Daedelus called Kneedelus.

But now, Kneebody is back to its original lineup and has a new album, Anti-Hero, due out on March 3.

The band will also be performing at the King Center Concert Hall at Metropolitan State University of Denver on February 13.

"For us, it's a return to the original Kneebody," explains Endsley, who lives in Denver and teaches jazz at Metro State.

“We're fifteen years into this project together, so it feels like an evolutionary point for us. In this collection of songs, there's a new twist. There are moments that are more lyrical, and some songs are funky and groove-oriented. It still feels like us, but it's a good pivot point,” he says.

The Anti-Hero album cover.
Courtesy of Kneebody
Kneebody’s members are spread out across the United States – New York, Los Angeles, Denver and Reno – but the jazz musicians have been playing together for such a long time that it’s not hard to pick things back up whenever they meet to record a new album or go out on tour.

"At certain points, we've said, 'Wouldn't it be a dream if we just did Kneebody all the time?'" says Endsley. "In some ways that sounds great, because I think for all of us it's still our favorite thing — we love our collective voice as a band. But we've also realized that outside influence is crucial...so that we're changing and growing."

Those outside influences extend well beyond Daedelus. In their respective cities, members of Kneebody – which include Ben Wendel on saxophone, Kaveh Rastegar on bass, Adam Benjamin on keys and Nate Wood on drums — have collaborated with the likes of John Legend, Busdriver and Gretchen Parlato, to name a few.

The subjective tastes of each musician are also reflected in the songs they write and contribute to Kneebody’s albums.

In anticipation of Anti-Hero’s release on March 3, Kneebody agreed to let Westword premiere one of the album’s songs, titled “Uprising.”


“It's more of the tough, rocking side of Kneebody,” says Endsley, who wrote the song. “It comes out of our love for Jimi Hendrix and Led Zeppelin and Grand Central Station and Sly and the Family Stone."

Asked if the titles “Anti-Hero” and “Uprising” suggest any kind of political message, Endsley confirmed as much. “More of the titles are leaning political or social in nature,” he said.

"I think for all of us, we are concerned with the political direction that our country has recently taken. And we're really feeling the polarization of the period socially and politically,” he says.

"The song ‘Anti-Hero’ was written a couple years ago, and the original inspiration was the show Breaking Bad and the character Walter White — the anti-hero," says Endsley. "But it definitely takes on a new context with Trump becoming president…. This is kind of new for us, because we never have been political as a group. It's instrumental music; we're not singing songs. But I think now we feel like more and more, that's what artists need to be doing, embracing a political aspect even if it's abstract electronic jazz music."

Still, Endsley says that at least one member of the band feels uncomfortable about getting too political, and it’s a topic that the group will be feeling out once it starts a new tour, which begins next week and includes the show in Denver on February 13 at the King Center. 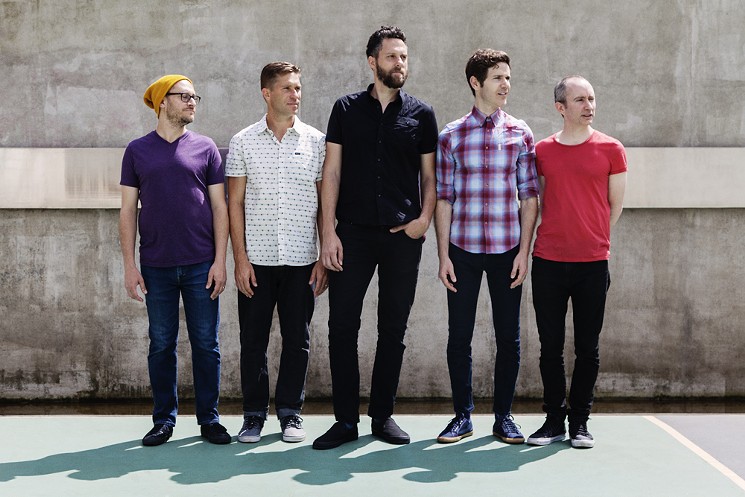 Credit: TARONA
"It will be nice when we do this tour, because I know one member of the band that doesn't particularly like the idea of being political in shows and prefers to keep that separate. I guess I'm more on the side of wanting to use this platform,” says Endsley. “We don't want anyone to feel alienated. Whoever you voted for, we want you to come to the show. And we don't plan on turning Kneebody shows into political rallies, but there are big social issues going on, and I don't personally want to deny that's going on and not address it in any way and maintain an unrealistic bubble. We can't deny the reality of what's happening in the country right now, and it's an artist's job to reflect that."

Kneebody's show at the King Center at MSU Denver begins at 7:30 p.m. on Monday, February 13. Tickets are $15 to $20 and are available here. Their album Anti-Hero is available for pre-order here.