Spin On: A Record Store Day Tribute to Wax Trax 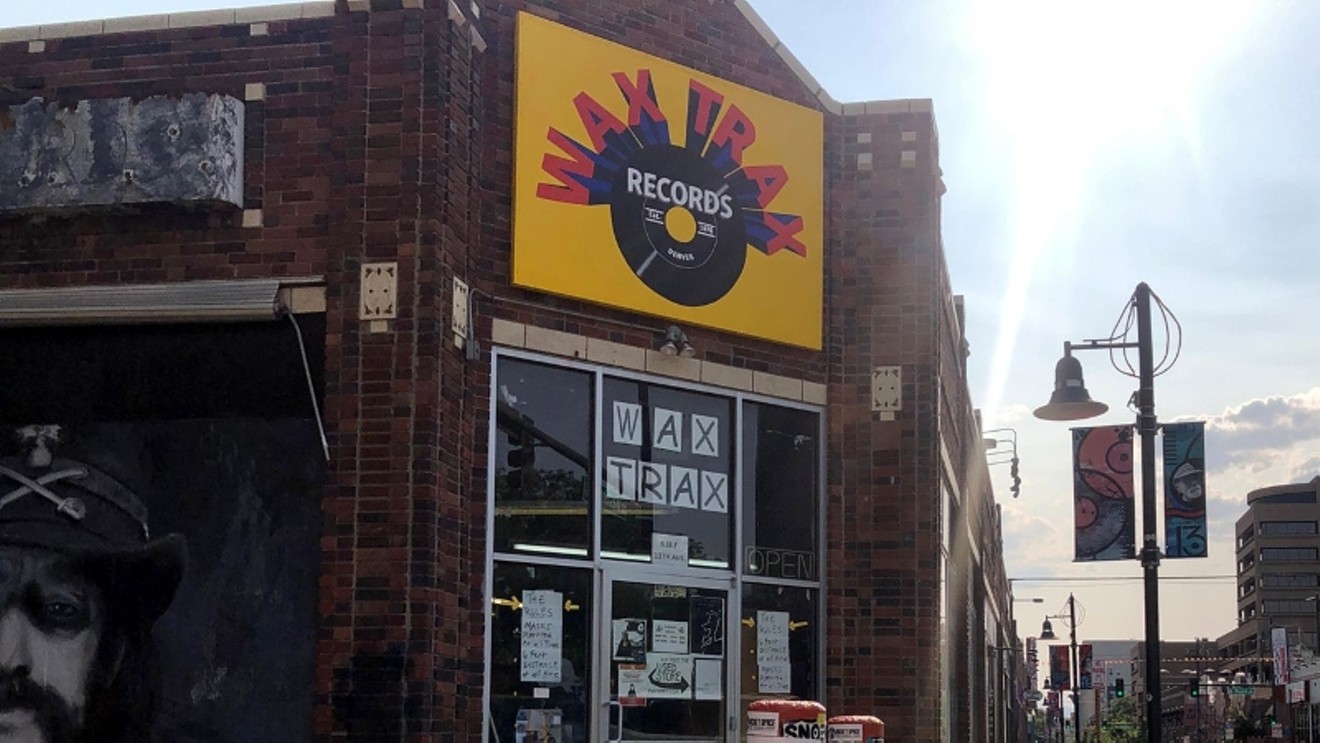 Wax Trax, whose new store is located at 638 East 13th Avenue (the used store is two doors down), will be participating in Record Store Day. Photo by Jon Solomon
Saturday, April 23, is Record Store Day, a celebration of independent retailers specializing in LPs, CDs and other products that music lovers can actually hold in their hands rather than stream on their phones. But while Wax Trax Records will be participating in the festivities, its two stores, located steps from each other on the 600 block of East 13th Avenue, deserve a salute every day, just as they have since the operation came to life in 1975.

For those scoring at home, that's 47 years, and for more than thirty of them, Wax Trax has been among my favorite haunts — which makes me a relative newcomer compared to customers who've been going to the joint since the Gerald Ford administration. But I'm second to none when it comes to my fandom for what has rightly become a Denver institution.

I grew up in Grand Junction and was raised by parents who weren't exactly music connoisseurs. My dad owned three albums — a Louis Prima set (actually kinda cool), a collection of songs sung by comedian Jerry Lewis (more weird than cool, but it could have been worse), and a snoozy long-player by easy-listening pablum provider Ray Conniff (so uncool that it canceled out any coolness exhibited by the other two). Moreover, radio outlets in the community essentially omitted anything programmers considered too edgy, too loud or too funky. While in middle school, I purchased a 45 of Vicki Lawrence's "The Night the Lights Went Out in Georgia" under the theory that if I finally ponied up, stations would stop playing the damn thing every ten minutes. It didn't work.

A few years later, however, my cousin gave me a job at the stereo store he owned, and the business subscribed to assorted music magazines revealing the existence of incredible performers whose work I'd never heard — and none of them were regulars on The Carol Burnett Show. Before long, I became a subscriber to Rolling Stone (a rare personage in Grand Junction at the time). By the time I hit high school, I'd found several kindred spirits with whom I made numerous trips to Denver to see concerts such as 1979's Colorado Sun-Day #2, featuring Ted Nugent, Heart, the Cars and UFO. Rock on! 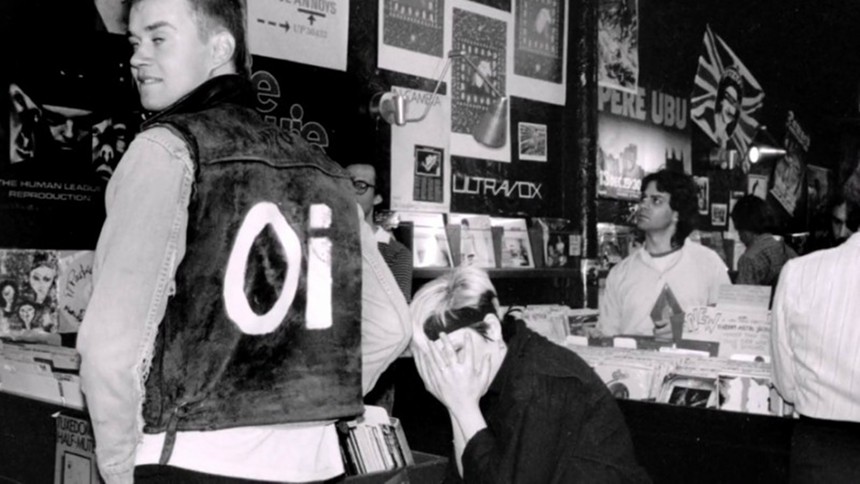 A screen capture from the documentary Industrial Accident: The Story of Wax Trax! Records offers an early look inside the store.
Denver Film Festival via Vimeo
During one such visit, I went to Wax Trax for the first time, and having come of age in a place where every business aspired to look like a branch of Sears, I was frankly scared to death. The store struck me as grimy and creepy, as did the patrons inside it. Only years later would I be comfortable enough to realize that these were actually my people.

After being hired as the music editor of Westword in October 1990, I returned to Wax Trax with a new perspective and a far better understanding of its history. The store was founded by Jim Nash and Dannie Flesher, who would go on to start a groundbreaking record label called Wax Trax!, based in Chicago. But they allowed Dave Stidman and Duane Davis, who purchased the business from them in 1978, to continue operating as Wax Trax, sans the exclamation point.

The early years of the store are explored in Industrial Accident: The Story of Wax Trax! Records, a fine documentary that screened during the 2018 Denver Film Festival. But while Nash and Flesher went on to blow minds with the help of acts such as KMFDM, My Life With the Thrill Kill Kult and Ministry, led by Al Jourgensen, whose Colorado roots are explored in the 2003 Westword profile "Hometown Boy Makes Bad," Denver's Wax Trax had an equally noteworthy impact on the local music scene. Stidman and Davis not only employed uncounted numbers of aspiring musicians over the years, but they were open to every new genre or subgenre to come along, and their adventurous attitude was reflected in the wide variety of recordings they stocked, whether new or used.

Of course, being on the cutting edge doesn't always pay off in the moment. Last week I happened to be reading Head-On, rocker Julian Cope's story of the Teardrop Explodes, the short-lived but seminal post-punk band of acid gobblers he led. In his account of the Liverpudlian outfit's second visit to the U.S. in 1981 (following a brief spate of gigs on the East Coast), he wrote about an in-store appearance at "Waxtrax," as he spelled it, prior to a Denver date. At that time, the group had only just surpassed cult status in the U.K. and was barely a rumor stateside, so it's no surprise that only three people showed up. Still, Cope remembered that the owners felt so guilty that they loaded him and his fellows down with free records as compensation. That's how legends are made. 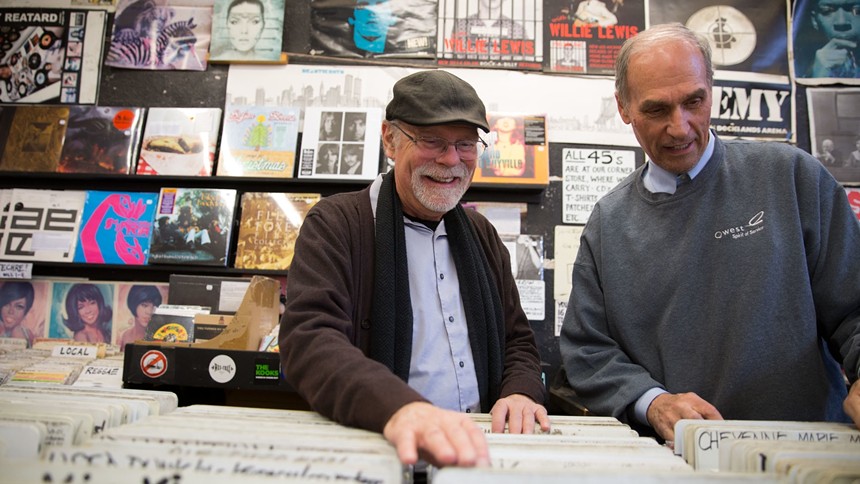 Duane Davis and Dave Stidman purchased Wax Trax in 1978.
waxtraxrecords.com
Over the decades that followed, Wax Trax earned a reputation with vinyl addicts nationwide for both its amazing collection and the bargains contained therein. Years ago, I visited the store with a friend from New York City, who found album after album that he said would go for five or ten times more in the Big Apple.

The reasonable prices really hit home for me in 1995, when I purchased a vinyl jukebox — a Seeburg model from the late 1960s that makes a cameo appearance in the 1977 film Saturday Night Fever. Over the quarter-century-plus since then, I've purchased literally thousands of seven-inches to keep the contraption fed, and a huge number of them have a Wax Trax tag on them. But while I occasionally joke that I've spent my children's inheritance on records, that's not actually true, since I picked up so many of them on the cheap.

Here's a recent example. The final season of the excellent Netflix series Dear White People was presented as a musical, and the initial episode from its last run, released in September, kicked off with an inspired version of "Round and Round" performed by R&B singer Tevin Campbell, who was only thirteen when it was released in September 1990. I had little memory of the tune, but when I researched it, I discovered that it was a forgotten song by Prince, who composed, produced and arranged it. For months afterward, I looked for the 45 in every record store I entered, and I went into plenty of them, including joints in Nashville and Knoxville, Tennessee, and Asheville, North Carolina, where I traveled over the holiday season. But a couple of weeks ago, I found a copy at Wax Trax — for fifty cents.

Metro Denver is blessed with a lot of great record stores — not just Twist & Shout, which founders Paul and Jill Epstein recently sold to longtime manager Patrick Brown, but also Recollect Records, at 1255 Delaware Street; the Angelo's CDs and Vinyl branches in Denver and Aurora; Black & Read Music, Books and Games, at 7821 Wadsworth Boulevard in Arvada; Paradise Found, at 1646 Pearl Street in Boulder; and more.

Still, Wax Trax remains special in part because of its longevity and continuity. The store is one of the few surviving businesses to pre-date Westword's annual Best of Denver issue — it was named Best Record Store (New) in the inaugural edition, published in 1984 — and has somehow managed to get better since then. Moreover, both Stidman and Davis are still around, with Stidman a staple at the used store's counter, where he can be found most days lovingly inspecting records that will soon find new homes.

Because at Wax Trax, every day is Record Store Day.

Visit Wax Trax, 638 East 13th Avenue, from 11 a.m. to 8 p.m. Monday through Friday and 10 a.m. to 8 p.m. Saturday and Sunday. For more information, visit waxtraxrecords.com.
KEEP WESTWORD FREE... Since we started Westword, it has been defined as the free, independent voice of Denver, and we'd like to keep it that way. With local media under siege, it's more important than ever for us to rally support behind funding our local journalism. You can help by participating in our "I Support" program, allowing us to keep offering readers access to our incisive coverage of local news, food and culture with no paywalls.
Make a one-time donation today for as little as $1.