Twist & Shout is located at 2508 East Colfax Avenue. twistandshout.com
Twist & Shout isn't just one of the best record stores in Denver. It's among the finest in the entire country — a glorious haven for music lovers of every generation.

And it's just been sold.

Don't panic, though. Yes, Paul and Jill Epstein, who have owned and operated Twist & Shout through three incarnations (the most recent at 2508 East Colfax Avenue) for the past 33 years, are retiring. But they're handing over the reins to Patrick Brown, who's managed the iconic business for the majority of that time. Just as important, Brown's concept is more about building on an established legacy as opposed to fixing what isn't broken.

When asked how important it was for him to sell to a member of the Twist & Shout family as opposed to fishing for the highest offer from a big-bucks investor, Paul Epstein responds with a single word — "Huge" — before enthusiastically adding plenty more.

"Pretty much the entirety of the decision was, 'How can we keep our obligation to our customers and to our employees? How can we honor that obligation to them without leaving a gaping hole in the lives of our employees and the music community of Denver?'" he explains. "But Patrick is a beloved character. All of the employees love him. We had a meeting this morning and announced what was happening, and when we told everyone, they all applauded."

Brown "is as much a part of the store as Jill and I are," Epstein continues. "Jill and I really built the store together in the early years, but Patrick's been here for all the growth. His role has continually increased, and he's taken on more and more. During the pandemic, I stayed home for almost a year, but he said, 'I got this.' He and a tiny little staff of three or four people kept the store going during the three months when we were closed and managed it until I came back. That gave me peace of mind and the ability to take care of what I needed to take care of. If you look at 'stepping up' in the Urban Dictionary, there should be a picture of him."

The choice to sell wasn't economically driven, Epstein stresses. In fact, "2021 was probably our best year in 25 years," he says. "It was just an amazing year. The store is more robust, more healthy and has more great collections coming in than ever. It allowed me the luxury of being able to say, 'I guess I can retire.'" Inside Twist & Shout.
Photo by Michael Emery Hecker
The journey that brought the Epsteins to this point is one built on love for each other, and for music. "I grew up in record stores," Epstein points out. "I'm a die-hard collector, and I was collecting before I owned a store. I moved to Denver in 1968, and within the first week, I went to Underground Records." Twenty years later, in March 1988, Paul and Jill bought the shop at a tax auction and transformed it into Twist & Shout.

At the time, the couple made their living teaching high school English, but Epstein wasn't a complete novice at retail; with "a couple of other guys," he had been the co-owner of Trade-A-Tape, a store in Boulder. But Twist & Shout, which opened at 724 South Pearl Street, was another magnitude of challenge, and it took a while to get going.

"We had no business — I mean zero," he recalls. "I just found the tax returns for our first year, and it was about a fiftieth of what we do now. But the overarching story is that we stuck with it. We grew organically. There was never any gigantic infusion of money. We grew from this tiny little back-street store on South Pearl, and we did it with the humblest of ideas."

One example: "I told Jill, 'I'm going to say hello personally and make eye contact with every single person who walks in the store. And I did. I stood at the counter every day, seven days a week, and made eye contact and said hello to every person who walked in. And you can't imagine what that brought. It's so simple — just being friendly to people who are new to your store. It seemed revolutionary, but maybe it wasn't. It's just basic human nature that people like being smiled at and having someone say hello."

There wasn't much room in the South Pearl space, but the Epsteins started staging in-store appearances by musicians anyhow. The first Epstein recalls featured blues guitarist Bugs Henderson, but it was the second, starring bluegrass great Peter Rowan, that stands out most. "He was playing when he started sneezing," he remembers. "He looked over at me and said, 'Do you have cats in this store?' And I said, 'Yeah, four.' He said, 'Oh,' and then took the entire audience outside to the sidewalk and played there, because he was allergic to cats."

In 1995, Twist & Shout moved to a former Safeway building near the intersection of Alameda and Logan and stayed there for just over a decade, with a vinyl store operating across the street during a couple of those years. Along with this expansion came in-store appearances by higher-profile artists. Epstein free-associates some of the most memorable acts to grace a stage at any of Twist's outlets: "Suzanne Vega. Elvis Costello. Ween. Silversun Pickups. The Orb. Mumford & Sons. [Flaming Lips frontman] Wayne Coyne did a lecture on the Yoshimi v. the Pink Robots album. The Black Eyed Peas drew a cipher on the side of the vinyl store and judged a breakdancing contest, which was an amazing event. We had all kinds of different jam bands when they were first starting out that helped bring their crowd to them: Widespread Panic, the String Cheese Incident."

He takes particular pride in the boosts given to local acts. "I remember the Flobots played a couple of times before they were signed, to a huge response. I think we sold 1,000 copies of their first independent release, which was instrumental in them getting signed to Republic Records and getting the single 'Handlebars' out there," he says. "And it was the same with the Fray. [Lead singer] Isaac Slade was literally fifteen when he started coming in, and we just watched them grow. In the beginning, we would have local bands and nobody would come, because Denver wasn't that supportive of a scene back then. But over the years, more and more people came, and local in-stores would be some of our biggest — Nathaniel Rateliff, DeVotchKa. It's one of my favorite things when I see those shows and the band's families are there: parents, grandparents, little nephews. It's really a special thing."

In 2006, Twist & Shout made its biggest move to date by closing the Alameda stores and relocating to East Colfax. "We built the building," Epstein says. "It was an empty lot."

The resulting project was all about inclusivity. "At the time we started, the prevailing winds with record stores were going toward being niche-y. With the advent of CDs, catalogues exploded, and so a lot of stores started specializing; there'd be heavy-metal stores and dance stores and hip-hop stores," he recalls. "But my thing was, we have to have everything. If somebody came in looking for Mariah Carey, even though that didn't seem like what our store was about, we had to have it — but we'd also have Sun Ra and G.G. Allin. We had to have everything, and we had to go deep." 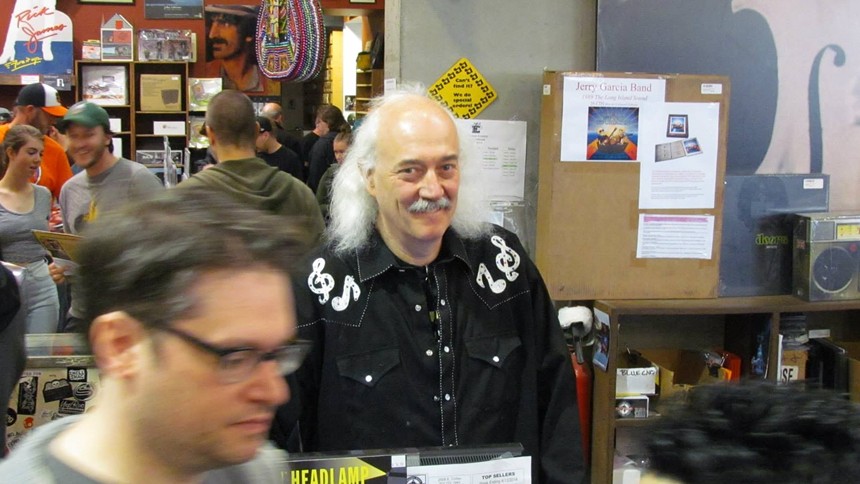 Paul Epstein at Twist & Shout during Record Store Day 2014.
twistandshout.com
Among those astonished was Grateful Dead member Phil Lesh. "He was doing an autograph signing, and we asked, 'Do you want to have any music?'" Epstein allows. "He said, 'Bring me the Coltrane section,' and when I brought him 92 CDs, his jaw hit the floor."

This approach paid off after the lockdown portion of the 2020 COVID-19 pandemic passed. "The first three months were total hell, and everybody was freaking out, just like they were in every industry except maybe grocery delivery," Epstein acknowledges But when it was coming to a close, we were like, 'Holy shit. I can't believe how much pent-up demand there is for vinyl.' And it was largely Gen-Xers. A whole new generation of young people are wild for it. They want to get their hands on vinyl and turntables bad. When we were closed, one of our first acts was to invest in a much more robust online sales tool, and it was amazing how many people almost immediately started supporting us online."

These days, vinyl remains arguably the biggest lure for Twist & Shout customers, but Epstein isn't ready to give up on compact discs. "In 2021, CDs had their best year in about ten. And not only have we never gotten out of CDs, but we won't, just like we never got out of vinyl. Culture is not a light switch; it doesn't flick on and flick off. It's a long, slow process, and some things change, but other things don't — and music is one of those things. It's not a goods-and-services thing. It's part of who you are. It doesn't seem to lose its validity and its importance in modern life."

Collecting records "is a really deep and soulful thing to a lot of people," he maintains. "Part of it is that it's reasonably cheap, and unlike a meal or a bottle of booze, it actually lasts past the initial use. And it can be a conveyor of nostalgia, but it's also identity validation that's almost beyond any other artifact in our society."

Now, Brown will be in charge of Twist & Shout's holy mission, and Epstein says that "knowing someone so beloved will be there to keep it going is what's giving me the intestinal fortitude to move on, knowing that we created something that's hopefully going to continue in perpetuity."

What's next for the founders? "Jill, the long-suffering, has essentially put all her desires on hold for 33 years to make my dream come true," Epstein says. "So now it's going to be all about travel and gardening and yoga and dogs and grandchildren and reading and listening to records — and shopping at Twist & Shout."
KEEP WESTWORD FREE... Since we started Westword, it has been defined as the free, independent voice of Denver, and we'd like to keep it that way. With local media under siege, it's more important than ever for us to rally support behind funding our local journalism. You can help by participating in our "I Support" program, allowing us to keep offering readers access to our incisive coverage of local news, food and culture with no paywalls.
Make a one-time donation today for as little as $1.