Choosing to ride a helicopter into EDC might sound a little ridiculous; it did to me. But while most of the hundreds of thousands of festival-goers make the hour-or-more trek to from the Vegas strip to Las Vegas Motor Speedway by car or shuttle, a few take to the air.

Maverick, a company that specializes in helicopter rides to the Grand Canyon and over the strip on normal Las Vegas weekends (or, at least, slightly more normal than EDC weekend), charges $500 a head for a one-way trip to or from the festival, or $800 if you buy a round trip. Sounds outrageous, I know, but plenty of people shell out, and I wondered why. The traffic is a nightmare, yes, but could flying in really be hundreds of dollars’ worth of cash better?

The answer, as I decided after hopping aboard myself, turns out to be yes — sort of.

Maverick claims a small bit of runway right by McCarran International Airport. Check-in is a breeze, after which passengers wait in a registration area complete with a bar and a DJ playing what I’ve come to think of as pool-party music.


When my boarding group is called, we all shuffle over to the glass doors separating us from the runway. I, the only journalist, am also the only one who’s never been on a helicopter before.

My fellow flyers are all VIPs, though you don’t have to be to buy a ride. I expect to see a bunch of cool music-exec types, wearing all black and watching apathetically as the Vegas scenery rolls by under us, unfazed by a helicopter ride they’d taken many times over. But out of the six of us on board, only one couple fits that description.

The rest of the group — even those who took the same ride the day before — point excitedly at landmarks like the Stratosphere and appear to hold their breath on some turns we make that are especially sideways.

All in all, the ride takes about fifteen minutes. Almost immediately, even in daylight, EDC is easily spotted thanks to columns of fire and swirling smoke from the pyrotechnics of the main stage, Kinetic Field. At night the Speedway is lit up like 300 Las Vegases all crowded together. That view alone is arguably worth the money, at least one time.

The other amenities that come with a Maverick flight — EDM playing in your helicopter headphones, a killer view, the ability to brag about your 100 mph ride to the fest — are cool, but they’re something I would hesitate to pay for more than once, let alone three nights straight. (To whoever chose the playlist, though: Bravo.)

All of that aside, though, there’s one major selling point that my fellow riders and I all agree on. Strapped into our leather seats, listening to a remix of the Chainsmokers’ “Don’t Let Me Down,” we watch the line of cars on the one-way road to EDC growing ever longer. My new friends laugh. “That is why we bought this,” one says.

In less than twenty minutes from takeoff, we’re hovering three feet above the ground, our pilot aiming for a you’ll-barely-feel-it touchdown (he succeeds). We wait a few more minutes until the helicopter’s blades, which reach speeds up to 400 mph and can wobble as low as the height of an average shoulder (making them a pretty big decapitation hazard), slow to a stop. Then we hop in a van and drive straight into the festival, no real ticket or bag check, no lines, no high blood pressure.

One thing’s for sure: There are worse ways to spend $500 at EDC.

Top 10 Classic House Records for People Who Don't Know Shit About House Music
I Wore Pasties at EDC and It Wasn't That Bad
Bottle Service: The Worst Thing That Ever Happened to Hollywood Clubbing 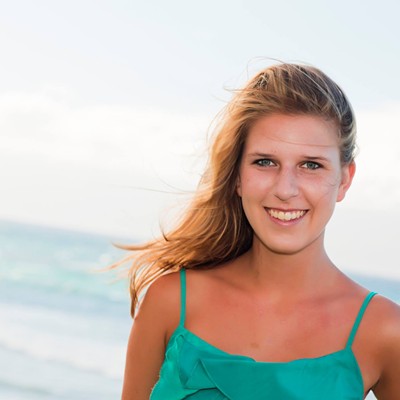 Sarah Purkrabek is writer and lover of music and travel. She spends 70% of her time writing, and the other 30% stalking her favorite artists’ tour schedules and plotting her next adventure. When she’s not behind a laptop, you can find her trying out the latest coffee fad, making any excuse to visit the beach, or binge-watching CSI on Netflix.
Contact: Sarah Purkrabek
Follow:
Twitter: @spurkrabek