The Lumineers performing at Fiddler's Green, August 25, 2017. Brandon Marshall
The best things in life are free, and the same is true for Denver's newest outdoor music venue. Levitt Pavilion opened in Ruby Hill Park this summer with the express purpose of "building community through music," and part of that initiative involved paying local luminaries to play free shows for the public. Slim Cessna's Auto Club played the grand opening of the Colorado Music Series, and concerts by SHEL (September 21) and Dragondeer (September 23) are still coming up. This got us thinking: What other hometown heroes should help build Colorado's music scene by playing at Levitt?

Missing from this list are favorites Nathaniel Rateliff & the Night Sweats (because they play frequently around town, and tickets are generally reasonably priced) and the hip-hop group Flobots (because they do so much local community organizing and advocacy already). Below are ten other Colorado-born acts (in alphabetical order) that should play Levitt Pavilion before the snow comes.

Big Gigantic announces two Colorado shows in September.
Big Gigantic
Big Gigantic
Okay, so Big Gigantic did just donate a computer lab to Youth on Record. But the Boulder electronica duo consistently sells out huge venues like Red Rocks, which plays host to its upcoming Rowdytown VI two-night festival on September 29 and 30. A ticket to one of those nights started at $46, so maybe next time they could break out the jams for the rest of us.

DeVotchKa
Okay, so last month DeVotchKa played a free surprise show at Ophelia's Electric Soapbox, where service-charge-free tickets to the band's Red Rocks show were for sale. But DeVotchKa, bring that theremin down to the park and play to the people next time! 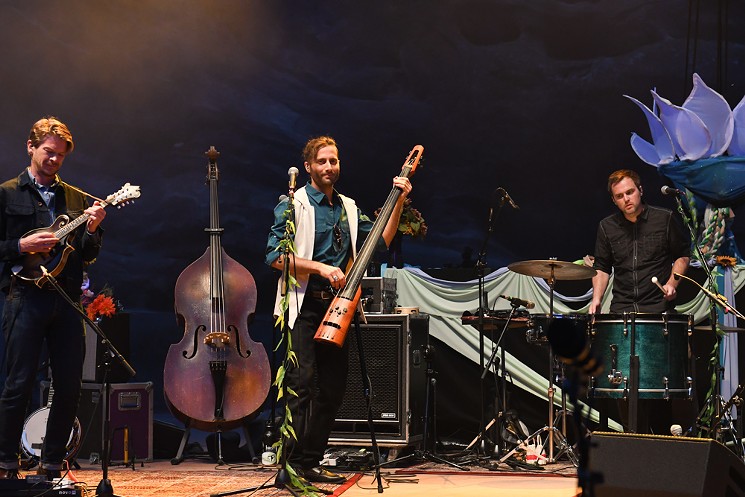 Elephant Revival
Miles Chrisinger
Elephant Revival
This Colorado band is all about community — whether it's playing in Nederland, Boulder or at Red Rocks. The visual elements of Elephant Revival's show, such as the silk dancers, would be a big hit, whether the audience is made up of fans of imaginative Americana or not.

The Fray
In June, the Fray — arguably the biggest Denver-raised band of recent pop memory — put on a free concert at Red Rocks and gave emerging artists from all over the country the chance to compete to open. The contest was sponsored by Southwest Airlines, and none of the competitors were from Colorado, stripping the event of any hometown flavor. Maybe the next time the Fray wants to give back to the Colorado scene or up-and-coming artists, it could book a show at Levitt — Hickenlooper is invited!

Rebecca Caridad
Gregory Alan Isakov
With his passion for gardening, the Boulder-based singer-songwriter may be a good choice to perform at the Denver Botanic Gardens. Isakov regularly sells out venues across the country, and more recently at Red Rocks and with the Colorado Symphony Orchestra. With a song used in a McDonald's commercial, we're betting Isakov can afford to play at Levitt and help grow the venue's crowds (to be fair, he donated the proceeds from that commercial to a handful of nonprofits).