The Dustbowl Revival Brings Roots Music Into the Future 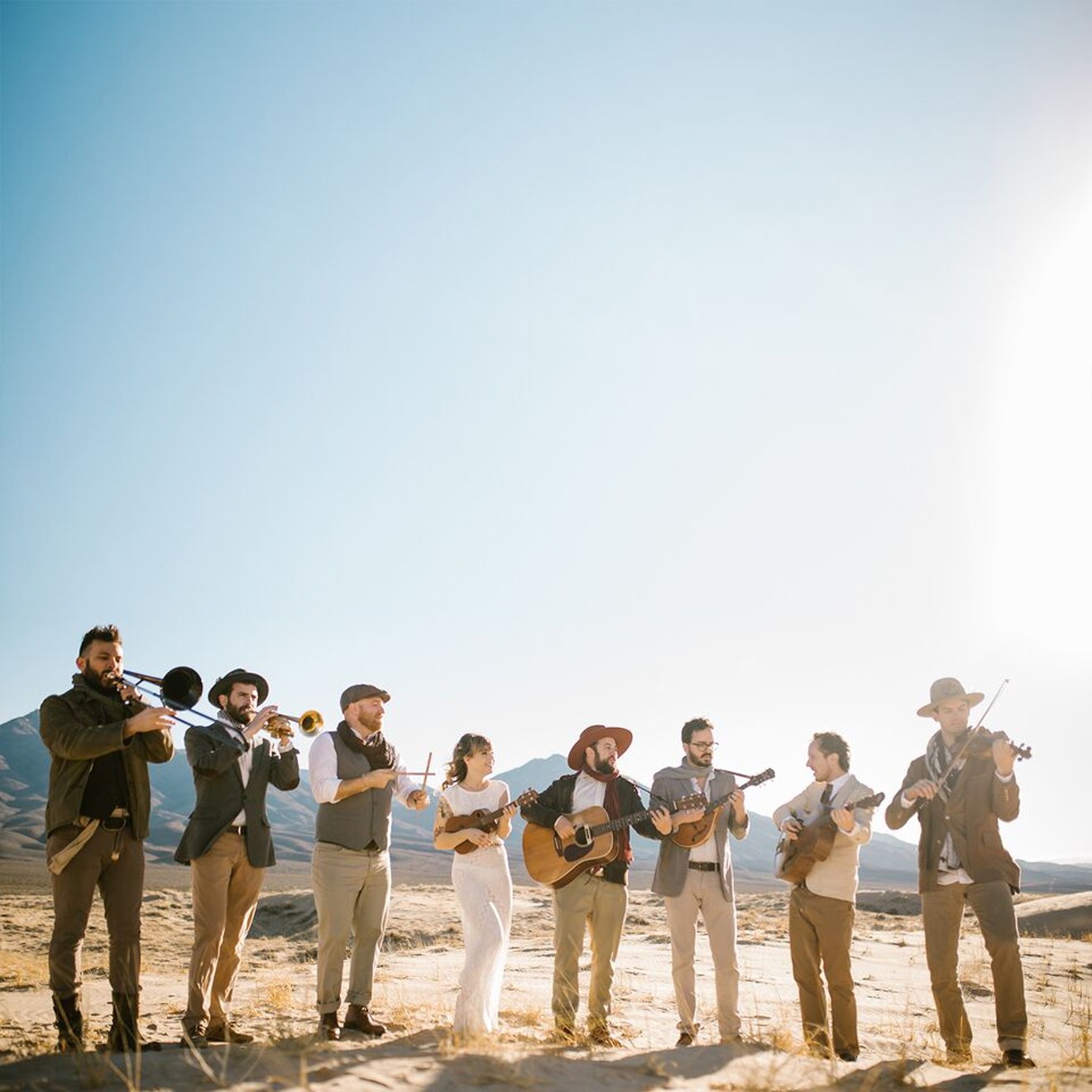 Courtesy of Dustbowl Revival
"My tastes have always been a little schizophrenic," says Zach Lupetin of the Dustbowl Revival. "I love traditional blues, swing and New Orleans jazz band stuff, but I'm also a huge Wilco and Nirvana fan. I like to say that we appeal to free-spirited nerds who can reference ten different genres in a short period of time."

While Lupetin's musical leanings are many, his career focus is singular. This year marked a decade for the group that he started with the help of a quirky Los Angeles Craigslist ad.

"I moved out to L.A. from Chicago about ten years back," explains the the 32-year-old guitarist and songwriter who grew up in Evanston, Illinois. "I put up a kind of tongue-in-cheek posting that turned into a meet-up of a bunch of like-minded folk and jazz musicians who helped me expand some of the stuff I was writing, and it became a full-time eight-piece about six years ago. I didn't think we would still be around ten years later, but we're going strong."

Lupetin's backstory is the stuff of cliche: After graduating from college in the Midwest, he packed up his hatchback with all his belongings and "rolled out for the coast." Yet in the face of a timeworn trope, his persistence, along with some luck and a change of musical palette, paid off.

"I'd been in bands in the Chicago area since I was fourteen," he explains. "I played in a CCR [Creedence Clearwater Revival] blues band while I was at the University of Michigan in Ann Arbor called The Midnight Special. It was pretty much a messy party band. But toward the end of college I caught the acoustic bug, and I began to try and tell some deeper stories in more of a folk tradition, though I never wanted to lose the rock and roll backbone."

In spite of its reputation for chewing up aspiring talent and spitting it out, the City of Angels was kind to the young strummer. After assembling a large aggregation of local players and cultivating the eclectic cabal, Zach Lupetin and the Dustbowl Revival released its first album, The Atomic Mushroom Cloud of Love, in 2008, and a live album, With a Lampshade On, recorded mostly at the Troubador in West Hollywood, in 2015.

"I wanted to create something that didn't sound like anything else" Lupetin says. "The L.A. scene was actually pretty welcoming. Most people like to talk trash about it, but it's a great melting pot town and a lot of our current band are the people who responded to that first ad I put up there. It was a little tongue-in-cheek. It said, 'Hey, I just moved here, and I'm looking for someone who can play one of these nineteen instruments, and if you like Woody Guthrie, Bruce Springsteen and the Staple Singers, let me know.' We were able to create a little community. People came to our shows and encouraged us, and then we started playing up and down the coast. By 2012, we were touring nationally."

The band, which now plays as many as 200 shows per year, followed its debut with You Can’t Go Back to the Garden of Eden in 2010. In 2011, the act, now known simply as the Dustbowl Revival, put out an EP, Holy Ghost Station, and then their Carry Me Home CD in 2013. The outfit found a bigger audience in 2015 when the video for “Never Had to Go,” from With a Lampshade On, starred band fan Dick Van Dyke and became an internet sensation.

"We came out of an old-time roots vibe, with influences like Pokey Lafarge and the Preservation Hall Jazz Band," says Lupetin, who plays an old Martin that has a hole worn in its top a la Willie Nelson's battered six-string. "It's the sounds of the past fused with what's happening now. I think there's gotta be history in roots music, or you're not doing your job. Bands like ours help preserve American folk music. We've played songs that are more than 100 years old. The fun part is putting your little twist of DNA in the chain. My friend Gary Prince and I used to raid the University of Michigan music library and check out up to fifty CDs at a time. We'd burn them to a hard-drive and listen to Son House and Lead Belly and just suck it up like a sponge. Some of the pre-war folk music was really accessible to me. I felt that I could write in that tradition, while stuff like bebop is technically over my head. We harken back to bygone eras, but we've brought it up to date with our own experience. We're always learning."

He says the group's recent self-titled record, The Dustbowl Revival, produced by Grammy Award-winning Ted Hutt, is a sound that blends folk, roots and soul music. The band, which includes the inspiring vocals of Liz Beebe, is sometimes compared to Nathaniel Rateliff & the Night Sweats and St. Paul & the Broken Bones.

"I tend to do most of the writing, but now everyone is contributing, and I'm collaborating more with our vocalist Liz. She originally came out to California to work in film production and animation. She was doing some acting and singing on the side, and she stepped in after our fist singer moved to Nashville. She's been taking on more songs to slay on and a lot of people are coming to see us for her. I'm watching her listen to Taylor Swift right now. She's pretty fiercesome."

Lupetin adds that Colorado is one of the group's favorite places to play.

"Sometimes people have trouble genre-assigning us, but everyone seems to get what we're doing here," he says. "And Denver has some of the best dancing crowds ever."