The lmpliers' latest single, "Lightning," drops on Friday. The Impliers
From the time Dan Hartman and Charles Ingram met, the two discovered they shared a love for oddly tuned guitars.

Jamming after school in a small soundproof room in Ingram’s home, the then-fifteen-year-olds would explore different tonalities and patterns on their instruments. “When you re-tune a guitar, it sounds different. Nothing you know works anymore. It forces you out of your box,” says Hartman. “So I would tune my guitar to something that sounded interesting or funny and hand it to Charles, who was a master of improvisational music. He would destroy what I gave him and re-create something totally unexpected and fresh.”

The duo created the band Phantom Zell and busked around Rocky Mountain, their hometown in North Carolina, and Raleigh, a hotbed for the indie-music scene. The uncanny indie/punk-rock band was welcomed by the underground scene, populated by members of now-iconic groups including Municipal Waste, Future Islands and Valiant Thorr.

“We were these rambunctious punk kids who got to open for larger acts,” Hartman recalls. “We were also the only punk band that wasn’t playing typical short, aggressive, fast-paced songs. I think that helped us stand out.” 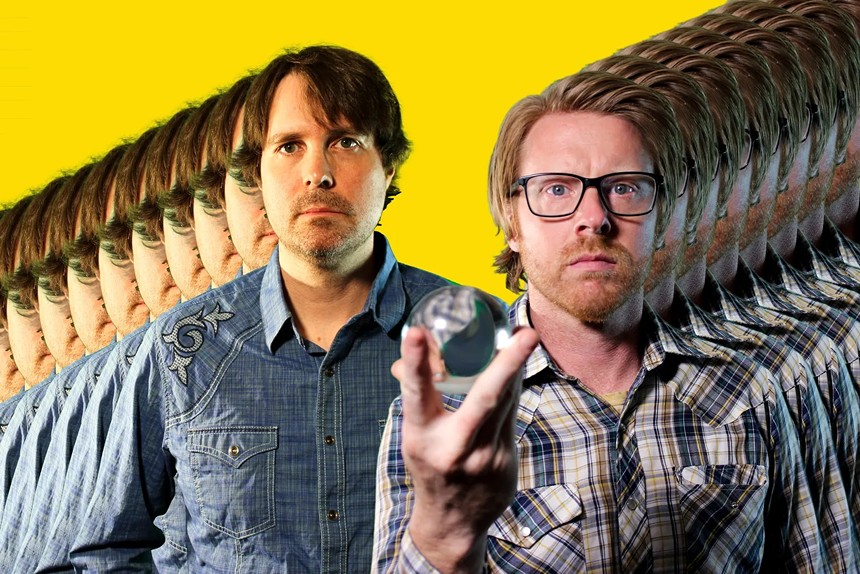 Dan Hartman and Charles Ingram of the Impliers have shared a love for oddly tuned guitars and abstract musicality since their teens.
The Impliers
By the time they were seventeen, some of Hartman and Ingram’s original material had landed on various compilations that included other diverse popular acts such as Jawbreaker, Of Montreal, Fugazi and Converge. They went on to play together a few more years before Phantom Zell disbanded. By their early twenties, Hartman and Ingram had parted ways and weren’t in touch.

But years later, they reconnected after a synchronous turn of events in their lives. “I was reeling from a ten-year relationship that ended out of the blue. And Charles called me and told me his marriage had fallen apart," Hartman recalls. As they started talking more regularly, Hartman and Ingram realized they had a lot of things in common.

“Both of us had anxiety disorders with episodes of panic attacks," Hartman says. "We also rediscovered we had the same creative spark we had when we were kids. So I texted Charles one day and suggested we start a new band.”

Stylistically, whiffs of influences ranging from Sonic Youth and the Pixies to Depeche Mode and the Talking Heads meander in and out of the psychedelic, ambient songs on the band’s debut thirteen-track concept album, Cocoon.

Hartman and Ingram played all the instruments and recorded and produced Cocoon on their own. Embodying a number of central themes, including topics about depression and mental illness, relationships and mortality, the songs were written to stand on their own yet flow seamlessly into each other. “We wrote it like we were writing a film score or a musical,” says Hartman.

Scheduled to be releases on August 19, Cocoon is part of a set of multi-concept records the duo plans to put out over the next couple of years.

“What we are trying to do with Cocoon and future albums is open the door to the universe that we have been creating," Hartman explains. "For us, we look at the overall art — the sights and sounds — and not just the music. There is a personality component aside from performing. We like to share our funnier side so people can get to know us better, which we do through images, videos and playful short clips we post on our socials weekly. The cool thing is, we’re finding the nerds that we are with other like-minded people who follow us on our Instagram.”

So far, the Impliers have teased Cocoon with several singles: “Bad, Bad Man,” released in March, and “I Promise," from April. The latter, Hartman says, is worth more than one listen because of its “vulnerable lyrics through vocal harmonies. Musically, it carries our addiction to upbeat melody, oddly tuned guitars and synths.”

The band will release its third single, “Lightning,” on all streaming platforms Friday, May 6. Written in an hour, the techno-pop single also includes some unique instrumentation. “We added some high guitar chords, which are played by twisting the tuning pegs instead of playing the frets; an electronic kazoo called a kazooka; and for the bass tracks, the bass is being hit with a drumstick versus being plucked,” Hartman says.

He adds that the song hits home for both multi-instrumentalists.

“I think there’s a real vulnerability in ‘Lightning.’ There is a bipolar sense to what's going on in this song," Hartman says. "Charles and I have been able to learn a lot about what it means to be bipolar, as we both have been diagnosed with it. I had always thought bipolar was someone who rapidly changed their mind or moods, but it's more of an exaggerated version of what everyone tends to go through: a longer arc of being down, and then ‘a coming out.’ I think this song shows some of that bipolar thinking, with its bursts of energy and some subdued elements. It really complements the broader story — the complexities of the human condition — that we explore on Cocoon.”

“Lightning” will be available on all streaming platforms on Friday, May 6. For more information on the band, visit its website.
KEEP WESTWORD FREE... Since we started Westword, it has been defined as the free, independent voice of Denver, and we'd like to keep it that way. With local media under siege, it's more important than ever for us to rally support behind funding our local journalism. You can help by participating in our "I Support" program, allowing us to keep offering readers access to our incisive coverage of local news, food and culture with no paywalls.
Make a one-time donation today for as little as $1.