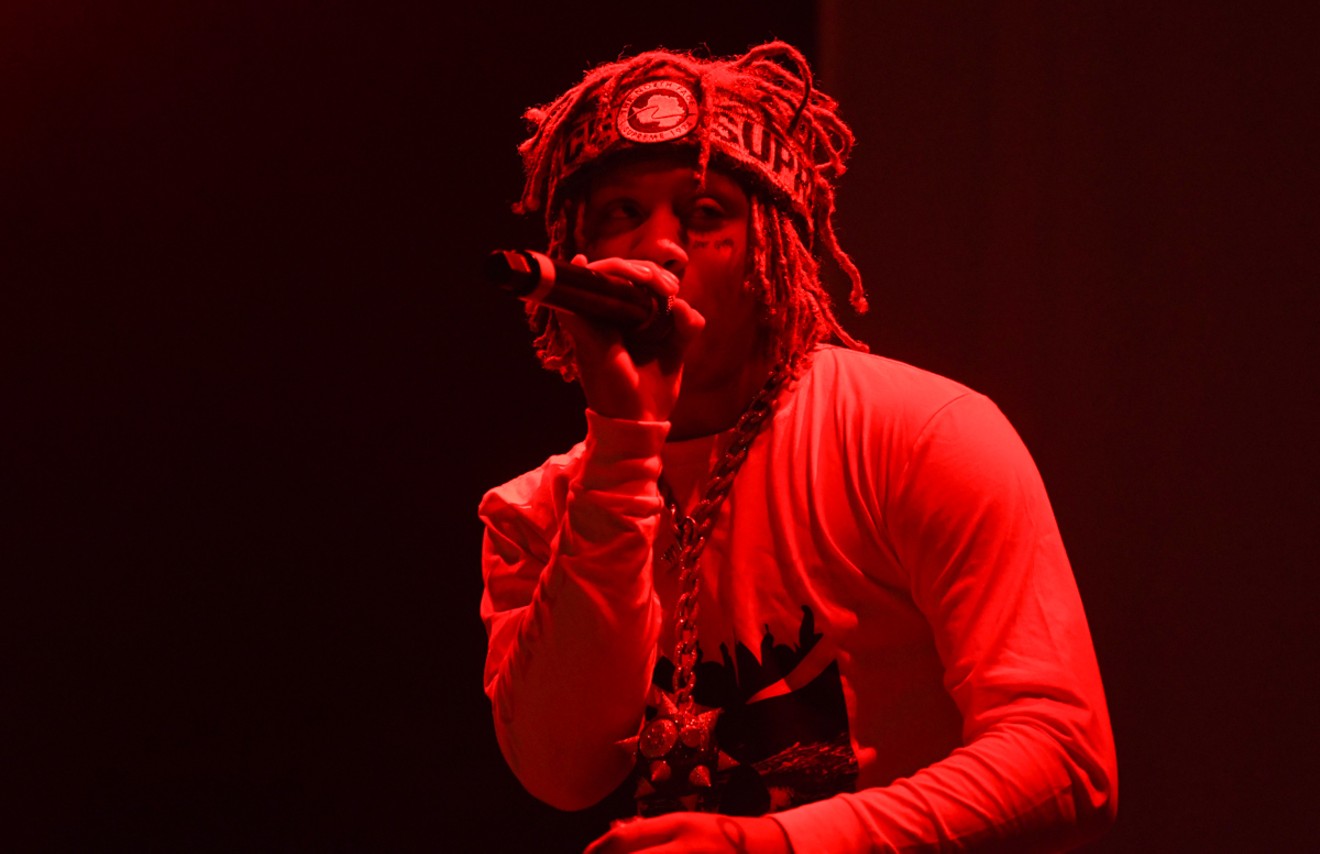 Trippie Redd has backed out of the Travis Scott tour. Miles Chrisinger
Trippie Redd, the red-headed mumble rapper with an imposing grill, may have earned himself more headlines by quietly backing out of Travis Scott's Astroworld tour than he would have if he had performed.

According to TMZ, which first reported that Redd would be abandoning ship last week, he left the tour out of frustration with Scott's crew, "production issues and interrupted set times."

Critics describe the Astroworld production as over the top. In the Boston Globe, Isaac Feldberg writes about the artist's December 2 concert at TD Garden in Boston: "Scott has gone even bigger, placing a carousel on one of two stages and bridging them with a roller coaster as he recast the shuttered Six Flags park of his youth as some hallucinogenic otherworld, home to however many off-kilter attractions he could construct and visit across the explosively keyed-up 85-minute set."

As spectacular as all that sounds, it takes time to set up the spectacle — time that Redd apparently didn't want cut from his set.

Scott has been quiet about his opener's departure; Redd's publicists did not respond to requests for comment from Westword.

Redd backed out of the tour the same week that Scott hit number one on the Billboard charts with "Sicko Mode" and secured himself three Grammy Award nominations: Best Rap Album for Astroworld and Best Rap Performance and Best Rap Song for "Sicko Mode."

The two artists have collaborated before, including in this video for the song "Dark Knight Dummo," in which they fight off zombies:


Redd's departure has not been acknowledged on publicity materials for the shows; online ads and Facebook posts promoting the December 12 tour stop in Denver still have Redd on the bill, and as of this writing, his Facebook page still says he's performing.

A few journalists who have reviewed Scott's concerts have noted Redd's absence, though most haven't bothered to mention it.

"The restless crowd was robbed of another opener, Trippie Redd, after the SoundCloud rapper dropped out of the tour days before its Minneapolis stop," wrote Samir Ferdowsi in the Minnesota Daily, following the December 8 show at the Target Center in Minneapolis.

"Make no mistake, though — nobody really cared," the journalist added. "The night was all about the most colossal hip-hop artist of the times: Travis Scott."

Travis Scott, with Sheck Wes and Gunna, 7:30 p.m. Wednesday, December 12, Pepsi Center, $29.95-$159.95.
KEEP WESTWORD FREE... Since we started Westword, it has been defined as the free, independent voice of Denver, and we'd like to keep it that way. With local media under siege, it's more important than ever for us to rally support behind funding our local journalism. You can help by participating in our "I Support" program, allowing us to keep offering readers access to our incisive coverage of local news, food and culture with no paywalls.
Make a one-time donation today for as little as $1.