“TSF was a punk-rock trio with me and brothers Todd and Craig Story. I had been playing bass for about two months, and we had zero experience playing live. Our first gig was at a warehouse party downtown in 1994.
As it turned out, our band had jumped into the slot that a band coming in from Santa Fe was supposed to play. They were a favorite, and everyone in attendance was pissed about the change. We arrived late and knew none of this. 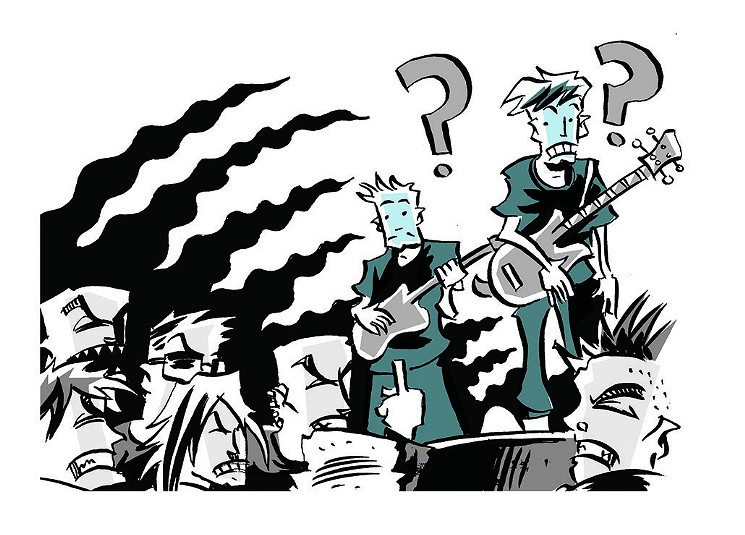 “Nervous as fuck, we started our first song. All the lights went out, and people started moshing. Chaos! My first thought was, “Fuck — I can’t see my frets! I’m so fucked!” Halfway into the second song, the drummer dropped a stick. He had no backups. So he’s feeling around on the floor, trying to keep a beat. I still couldn’t see my bass and was barely playing. TSF totally derailed. Punks were moshing, spitting and yelling at us. Someone finally pulled the plug on the sound, and the crowd booed us out the door.

“For some reason, even after that debacle, I stuck with music — and was able to salvage some sort of musical career.”

The Railbenders have been playing straight-no-chaser hard country music in Denver for the past seventeen years. They’ll be at the Gothic Theatre on Friday, December 15, and at the Bluebird for their annual holiday show on Saturday, December 16.