The Velvet Elk Lounge Expands With Music Venue in Boulder

Strangebyrds play an album release party at the new venue. Jonathan Phillips Photography.
Is Boulder ready to get down? Dave Query, chef/owner of the Big Red F Restaurant Group, just expanded operations at the Velvet Elk Lounge to include live music, in hopes of jump-starting the town's  scene. "We've been trying to do a proper live-music venue for a long time now," Query says. "We've been looking around and trying to figure out how to morph one of our places into it."

Query and his team started looking before the pandemic, but then the outbreak of COVID-19 put their plans on hold. They had their eye on a space in front of the Velvet Elk Lounge and by their Post Chicken & Beer at 2037 13th Street that was occupied by Silver Vines Winery; after the winery succumbed to the challenges of the pandemic, they wound up acquiring the space in January and started construction a month later.

"The Velvet Elk Lounge has been open since 2017, but in a much smaller, really funky and not necessarily enjoyable format," Query says. "We took the front space, knocked out a wall, and now it feels like a proper, Austin-style honky-tonk roadhouse, with a long, shotgun-style building and a stage in the back. It just feels right." Dave Query wants to jump-start Boulder's live-music scene.
Big Red F Restaurant Group
A Boulder native, Query remembers the history of the place well. "This whole building of the Post, the Velvet Elk Lounge and the Bohemian Biergarten was a Cadillac dealership in the ’50s, then a bowling alley in the ’60s, and then in the ’70s and ’80s it was a Mexican joint," he recalls. "Then there was a travel agent there for a while, and then in ’94, Red Fish opened, which was owned by the Oskar Blues guys. One of the first iterations of Dale's Pale Ale was brewed in that brewery, and one of the first iterations of Fat Tire was brewed in that brewery. We brewed our Post beers there until three months ago, when we yanked all the beer equipment out."

Beer equipment out, music in. There's a hole in the Boulder entertainment scene that Query is eager to fill. "I had been doing the restaurant-industry thing my whole life, but I always appreciated the Blue Note, an old OG Boulder music venue; the Walrus — all these places where you could go see live music. And there's just not as much of a live-music scene in Boulder as there used to be," he says. "We only hope to add to the live-music scene in Boulder. I don't think we have any special sauce to do it better than anyone else, but we hope to do it as well as anyone else."

Query's certainly done that with his restaurants. His first food-industry job was at Mustard's Last Stand. He attended the Culinary Institute of America in New York before traveling and cooking around the country for eight years; once back in Colorado, he opened the Lick Skillet Cafe in Gold Hill in 1989, then started Big Red F in 1994. Today the company has fifteen restaurants, including all of the Post Chicken & Beer locations, all of the Jax Fish House & Oyster Bar outlets, the West End Tavern and Centro Mexican Kitchen. The Velvet Elk isn't Big Red F's first new nightspot, either: The group recently opened the Groovy Bar in the basement of the Post in LoHi.

While some of these spots host live music outside, the Velvet Elk Lounge will be all indoors, Query notes, so getting the proper sound system was a top priority. "If you're going to have a music room," he says, "you have to do it right."

The capacity at the Velvet Elk is around 175, and the venue has seats, booths and plenty of space to dance. "It's a perfectly laid-out small room," Query says, adding that it will have a "fun cocktail list," as well as wines and Post beers on tap. There's also a small but appealing menu of "Things to Eat While You Drink."

"It's a great little timeless bar. It feels really comfortable. First and foremost, it's a bar that's open seven days a week that opens at 4:30 every day," he notes. "And then a couple of nights a week, we'll have a band on stage, or we'll do comedy one night a week, or an open-mic night or a Motown dance party, or somebody spinning 45s with dance tunes. It's all about music."

Don't expect any EDM-heavy DJs; the Velvet Elk Lounge will mostly stick to "rock-forward" music. "I'm not really into electronic stuff," Query explains. "We're going to have a consistent, curated rock-and-roll format. Blues, swamp rock, maybe some funky country once in a while. But, yeah, we're adults."

The venue's debut show was on May 15, with the Strangebyrds playing an album-release party. So far, more than thirty other shows have been lined up for the next two months. On Thursday, May 19, the four-piece Boulder rock band Augustus will play.

The Velvet Elk Lounge has partnered with Z2 Entertainment, which books the nearby Fox Theatre, to help with bookings. 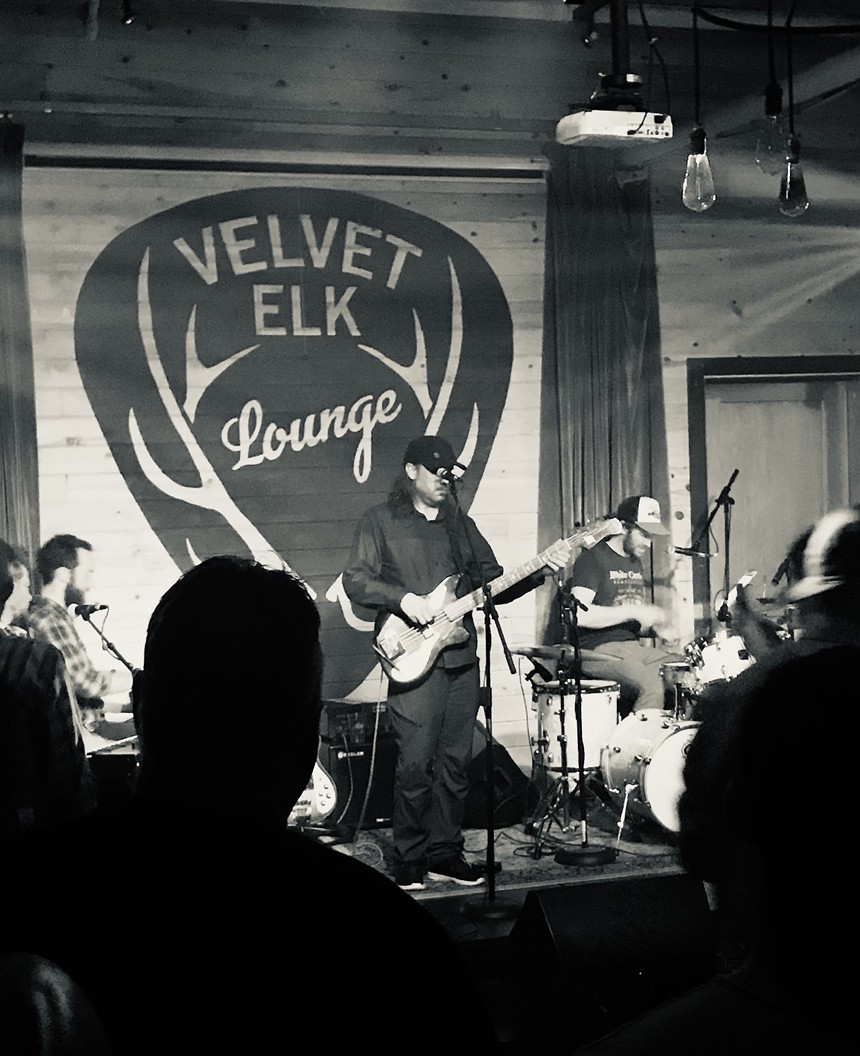 An acoustic band plays Velvet Elk Lounge.
Big Red F Restaurant Group
"Now that we're a proper size, we have some collaborations with Z2," Query notes. "Unfortunately, they're all a little bit out and we can't announce them yet, but some national touring acts that are coming through town in the next six months are going to play at the Velvet Elk, which is going to be super cool. We've got a really great sound system, and it's going to be an opportunity for larger, well-known bands to play a smaller venue, and for music fans to see a more intimate show."

He can reveal that one of the big bands swinging through is Melt, a New York City-based indie soul-rock act, on December 2; tickets will go on sale Friday, May 20.

And those artists are emerging. "Now that this has been announced, there are so many bands coming out of the woodwork, talking about how excited they are and sending us demo tapes," Query says. "There's a lot of great music and musicians in Colorado and along the Front Range. Fort Collins has a killer live-music scene going on, and Denver always has. But Boulder has kind of ebbed and flowed, so we hope to only add to what's already there and welcome more places that do live music.

"High tide floats all boats," he concludes. "The more music venues, the better for musicians and for people who love music."

Augustus plays the Velvet Elk Lounge, 2037 13th Street, Boulder, at 8 p.m. Thursday, May 19; tickets are $10. Velvet Elk Lounge is open Wednesday through Sunday. For more information, visit velvetelklounge.com.
KEEP WESTWORD FREE... Since we started Westword, it has been defined as the free, independent voice of Denver, and we'd like to keep it that way. With local media under siege, it's more important than ever for us to rally support behind funding our local journalism. You can help by participating in our "I Support" program, allowing us to keep offering readers access to our incisive coverage of local news, food and culture with no paywalls.
Make a one-time donation today for as little as $1.
Emily Ferguson is Westword's Culture Editor, covering Denver's flourishing arts and music scene. Before landing this position, she worked as an editor at local and national political publications and held some odd jobs suited to her odd personality, including selling grilled cheese sandwiches at music festivals and performing with fire. Emily also writes on the arts for the Wall Street Journal and is an oil painter in her free time.
Contact: Emily Ferguson