Weedeater Wants You to Smoke Dope and Listen 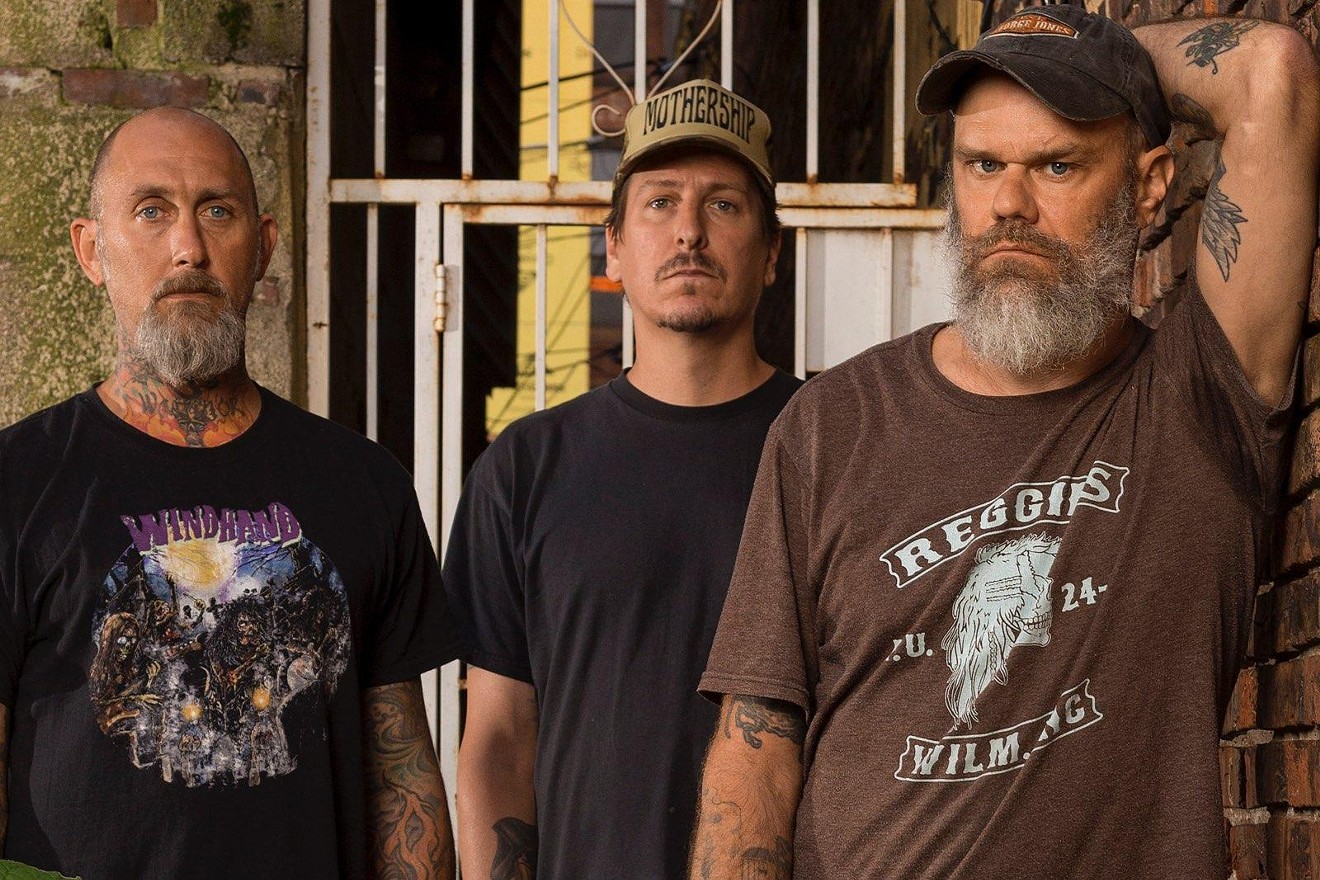 North Carolina's Weedeater likes to smoke, but don't call it stoner rock. Scott Kinkade
Weedeater frontman and bassist Dave “Dixie” Collins is quick to sing the praises of cannabis whenever the topic comes up.

“I think it’s one of the best things on the planet, for sure,” he gushes, in his distinct raspy voice.

Born and raised in Wilmington, North Carolina, Collins doesn’t understand why his home state won’t consider legalizing marijuana as Colorado did in 2012, if for nothing else than the economic benefits. He recalls a previous tour when the band was making its way from Wyoming to Colorado, and pot seemingly paved the way.

“We were riding through Wyoming getting beat to death by their shitty-ass roads. Then there’s a sign ‘Welcome to Colorado’ and all of a sudden, it’s like you’re riding on glass. They did that with weed money, you stupid motherfuckers,” he says.

The smooth thoroughfares of the Centennial State will again welcome Weedeater, as the band is set to play the hi-dive on Monday, May 23, with openers High Tone Son of a Bitch and Jeff Pinkus.

Given the band’s name and penchant for regularly toking up, it’s easy to categorize Weedeater's music as “stoner metal,” but Collins prefers to call it “cave metal,” which is the tag used for the band’s official LLC.

“I don’t know where the 'stoner rock' came from, but I’m pretty sure that anybody who ever rocked was stoned. Louie Armstrong rocked, and he was stoned,” he says. “Really, my dog just ate my weed a long time ago. That’s where the name came from. She was fine. She slept for a while, but she was fine. She lived to be nineteen years old after that, so she was a good girl, except for that — I needed that weed.”

The band put out a best-of compilation in 2018 and is currently working on new material. It feels good to get back on the road again, Collins says, especially after the past few years. Other than the lull of touring during the pandemic, Weedeater suffered a sudden loss in late 2018, when drummer Carlos Denogean died at the age of thirty.

“Carlos passed away, and that was a curveball, for sure. He was a real healthy guy. He lived down at Carolina Beach, and that morning he ran from pier to pier, which he would do just about daily. When we were in Europe, he would run around castles and shit. He was a super-healthy guy. He didn’t smoke. Barely even drank. Probably the unhealthiest thing he ever did was stand between me and (co-founding guitarist Dave Sheppard) Shep, to be honest with you,” Collin says, maintaining a sense of humor. “That was a hard one to swallow. It’s still hard to think about. It’s just crazy. He was just sitting at the computer and fell over dead at his house. It’s definitely odd, man. The thing with Carlos just blew us away. We rebounded from that as good as we could.”

Veterans of the Southern circuit since the mid-1990s, Weedeater hasn't filled its catalogue with stereotypical laid-back, easy-listening jams one might associate with regularly indulging in the devil’s lettuce, but instead includes elements of sludge, Southern rock, punk and Appalachian tones. Collins jokes that the band name could also be in reference to the music sounding like a weed whacker — or weed eater, if you will.

“Well, it’s cave metal. We’re not trying to reinvent the wheel or anything,” says Collins, who grew up on outlaw country and punk rock. “People should expect it to be loud, and if they’re not at a live concert, they should turn it up. Like I said, it’s cave metal. It’s not supposed to be thought about. I love Rush, but it’s not something you have to think about what’s going on. It should hit you right in the gut.”

Whether you’re buzzed or not makes no difference, he adds, though he does encourage concert-goers to spark up during shows if they’re so inclined.

“Music is art, and art is in the ear of the beer holder. I think that it’s definitely not a bad thing to do. Get stoned and listen to anything, hell,” Collins quips, adding that he discovered his passion for music and “smoking grass” around the same time as a teenager. “I think it’s a Reese’s Cup: two great tastes that go great together. Once you figure that out, it’s like shooting fish in a barrel.”

Plus, playing in a state that has fully embraced marijuana may also help Weedeater with its stage show.

“I hate, more than just about anything, strobe lights, and I fucking hate haze. That fucking fake smoke. It smells like burnt plastic. It fucks with my throat,” Collins says. “Maybe we’ll turn this corner, and we’ll have actual organic smoke machines. If you sell the club out and it’s a 500 capacity, you got potentially 500 smoke machines.”

Weedeater plays HQ, 60 South Broadway, at 8 p.m. Monday, May 23. Tickets are $25.
KEEP WESTWORD FREE... Since we started Westword, it has been defined as the free, independent voice of Denver, and we'd like to keep it that way. With local media under siege, it's more important than ever for us to rally support behind funding our local journalism. You can help by participating in our "I Support" program, allowing us to keep offering readers access to our incisive coverage of local news, food and culture with no paywalls.
Make a one-time donation today for as little as $1.