"It's a brutal shift," he notes. "You really have to love what you do. Luckily, I did love what I do for a long time."

The life change has been in the works for a while. "I probably told them a year ago," Shapiro says, referring to management. "My contract's coming up, and I was like, 'Do I want to do another contract?' I'm getting up there" — he's in his late sixties — "and I just decided the time is now."

A native of Norfolk, Nebraska, Shapiro graduated from the University of Nebraska in 1975, and landed his first broadcasting job at a signal in Omaha, KETV, where he interned while earning a journalism degree. "I worked there a couple of years, then went back to graduate school at Iowa State. I got my master's degree and worked in Des Moines while I was going to school. Then I moved to Wichita, Kansas, where I worked for five years at KAKE. I went there mostly because I wanted to work with Larry Hatteberg, who was a pioneer in photojournalism. He's retired now, but he really started the whole visual storytelling thing in TV news. I learned so much from that guy."

In the meantime, Shapiro targeted outlets in Denver, "because I was a skier. I kept applying, kept applying, and finally, somebody hired me" — 9News, in 1983.

His first gig at the station was "as the Boulder bureau reporter," he recalls. "We had four bureaus at the time: I think one was in Grand Junction, and we had Fort Collins and Colorado Springs and Boulder. And it was a terrific job. I had a photographer, and we got to pick out our own stories and cover some really interesting news of the day: trials and things like that. Then they moved me to Denver — they replaced me with [current nighttime anchor] Kim Christiansen — and I worked as a reporter for two or three years."

At the time, the 9News morning-show anchor was Jim Benemann, now with CBS4 Denver, who plans to retire at year's end, too. Shapiro began filling in for Benemann, "and when Jim left for Channel 4, I replaced him," he recalls.

The year was 1989, and over the course of the next 33 years, Shapiro was the constant on what became the dominant morning-news program in Denver and a leader on the national level. "I'm very proud of the work we've done," he says. "The dynamics of the show have changed, but one thing has remained the same — that we're pretty much the number-one show in the market, and, for many years, the number-one show in the country. And I think it's because Channel 9 decided they were going to be dedicated to the morning show. They expanded staff and hours, and they've been very supportive. Plus, the Channel 9 brand doesn't hurt, either: 9News has been number one since I've been here, and probably before I was here, too."

Over the course of his run, Shapiro has been the glue guy, holding the operation together amid countless shifts in personnel. And while morning news is often satirized as giggly, perky and lightweight, Shapiro has seamlessly avoided such pitfalls.

"I think that's kind of personality," he allows. "My background is in serious journalism, and even though I like having fun — and there are opportunities on the morning show to do crazy things and make people smile — I've always tried to know where the line was and tried not to cross it, like some people do. You'll never hear me sing the weather on TV; I guarantee it."

Although a lot of 9News morning-show personnel graduated to prime time, including meteorologist Kathy Sabine, who returned to the afternoon airwaves this week after skin-cancer surgery, Shapiro stuck around, in part because "my kids were little when I started on the morning show, and it was a good shift for the family. My wife worked full-time, so I was available to pick them up at school and take them to scouts and coach the baseball team. So it was a pretty good shift from a personal standpoint, even though the hours were tough." 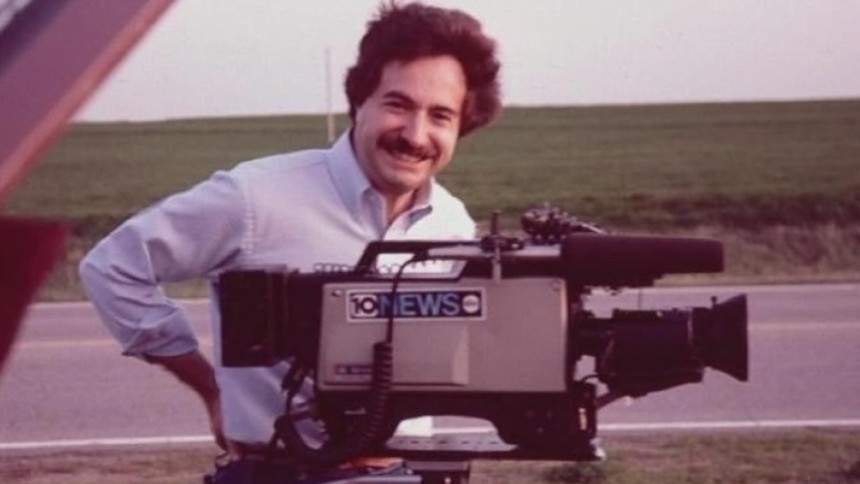 Gary Shapiro during the early days of his 9News career.
Courtesy of 9News
That's putting it mildly. "For 33 years, I've had no life during the week," Shapiro concedes with a rueful chuckle. "I go to bed at about 7:30 or 8 at night and get up about 2 in the morning. I'm in the building at 3 — and during the pandemic, I had to get up a little earlier, because there were only about four of us working in the newsroom, and everyone else was working from home."

Today, Shapiro's two kids are grown, and TV has changed in a big way, with far fewer folks tuning in live than at the dawn of his career. "There's no doubt we don't have the number of viewers we did, because people can get their news online anytime they want," he points out.

But while morning news isn't immune from this phenomenon, such shows tend to do a better job of hanging on to audiences than many programs later in the day. Shapiro credits that to "people's routines. My daughter's friends are in their thirties, and they tell me they watch because they're up with their kids and getting things ready for the day. It's a matter of routine. They're used to getting up and turning on the morning show. And luckily, in this market, most of them turn on ours. They want to know what the weather is going to be, if there's a traffic jam on the way to work, what the top story is, and have a cup of coffee and smile at something. We try to walk that fine line and provide all of that, and I think over the years, we've done a pretty good job of it."

Shapiro's contract expires on December 9, and he expects that will be his last day as a morning-show regular, or close to it. But he's currently negotiating with 9News about a continuing part-time role at the station. "I used to do features called 'Positively Colorado,' which is just what it sounds like — positive features about people and places in the state that are interesting to me, and hopefully interesting to the viewers," he says. "So I think I'm going to resurrect 'Positively Colorado.' And I've been doing about three specials a year for 9News for thirty years or so. A couple of months ago, one ran about Amache, the Japanese internment camp, where we tracked down survivors — and we found out that a lot of people didn't know what Amache was. Hopefully that show provided a service, and it's the kind of thing I'm looking forward to doing more of."

Mark Cornetta, president and general manager of 9News, has nothing but compliments for Shapiro. "He’s made an indelible mark on Colorado with in-depth reporting over many years about everything from Denver’s Five Points neighborhood to the Air Force Academy to Pope John Paul II’s visit to Colorado in 1993 to his recent program about Amache," he says. "Gary’s storytelling is unique and memorable, and we’ve been fortunate to have him with us for the past four decades."

A morning-show succession plan is already in place — but more changes are on the way. Cornetta divulges that "we are returning to a two-anchor format, and Jordan Chavez will be shifting to Gary’s spot on 9News mornings in December. Jordan joined 9News in 2017 and began anchoring 9News Saturday and Sunday mornings in 2020. Natasha Verma is leaving 9News, and her last day is next Thursday."

For his part, Shapiro is looking forward to getting a chance to ski during the week instead of only on the weekends, as well as traveling more widely with his wife. And he's confident that he'll be able to adjust quickly to a more typical schedule.

"Luckily, I can sleep in on the weekends until about eight in the morning," he says. "Some people can't; they still get up at three o'clock. But I've always been the kind of person where if I can sleep, I do."

A while back, Shapiro reveals that he asked Benemann, his morning-show predecessor, "how long it took him to get his sleep pattern back to normal, and he said, 'About ten minutes.' Hopefully, that'll be the case for me."
KEEP WESTWORD FREE... Since we started Westword, it has been defined as the free, independent voice of Denver, and we'd like to keep it that way. With local media under siege, it's more important than ever for us to rally support behind funding our local journalism. You can help by participating in our "I Support" program, allowing us to keep offering readers access to our incisive coverage of local news, food and culture with no paywalls.
Make a one-time donation today for as little as $1.