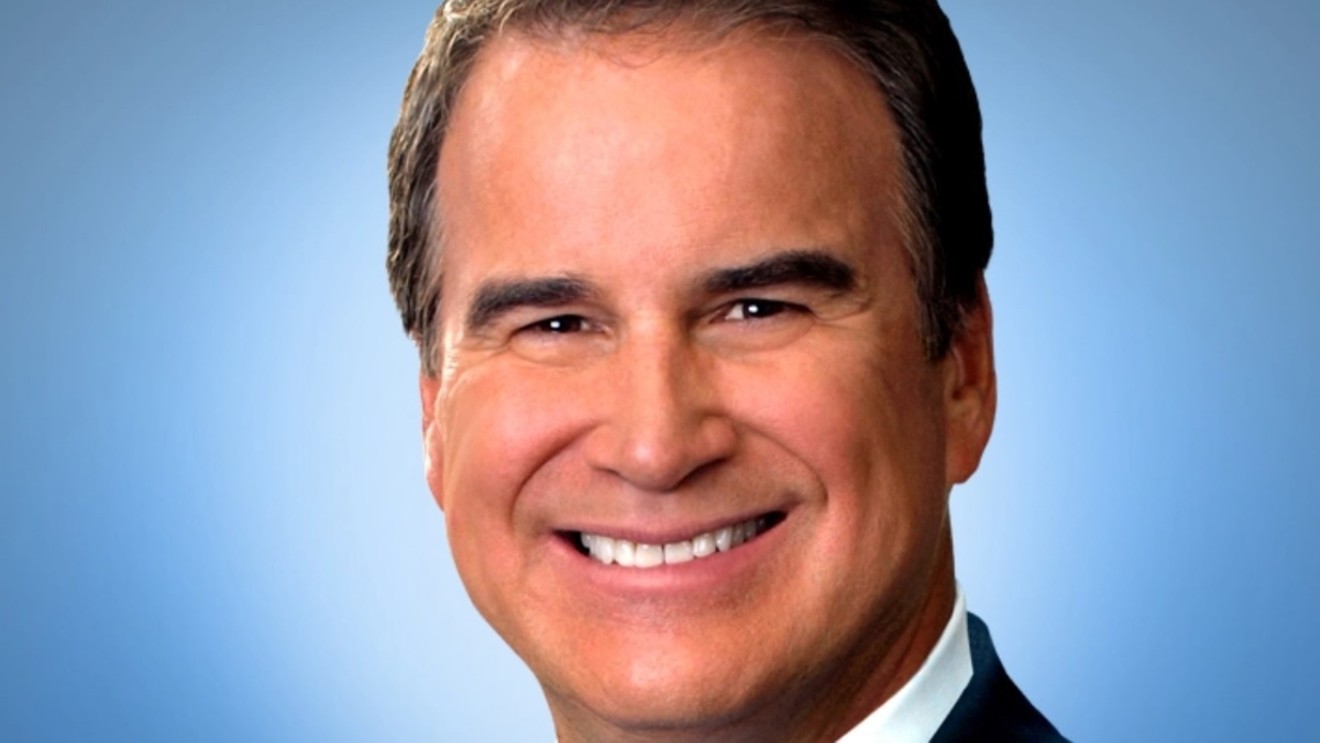 Jim Benemann has been one of CBS4 Denver's lead anchors since 2003. CBS4 Denver
Jim Benemann first landed a gig in Denver television news in the 1970s, and he's been a staple of the local airwaves for most of the years since then, primarily at CBS4 Denver, where he's held down one of the main anchor chairs since 2003. But this week, Benemann, a multi-time winner of Westword's Best of Denver award for top TV anchor, announced that he plans to retire at year's end.

Benemann's 65 and in good shape — and he wants to take advantage of that while he can.

"There's a window that we enjoy of good health and the opportunity, without the constraints of a work schedule, to travel places we've dreamed of and to spend great time with kids and grandkids," Benemann says. "My wife, Karen, and I feel like that window is still pretty wide open. We have our health. But we don't want to risk getting into a position where, heaven forbid, something happens in a couple of years and we can't do what we want. It's the classic life-is-short-and-tomorrows-aren't-guaranteed thing. That's where I'm coming from."

Evening anchors haven't been leaving at the same pace, but the last decade has seen the retirement or departures of many star Colorado broadcasters, including Fox31's Libby Weaver and Ron Zappolo, 9News's Mark Koebrich and Adele Arakawa, and Channel 2's Mike Landess and Ernie Bjorkman. By comparison, CBS4 Denver has been a paragon of stability, with Benemann co-anchoring with Karen Leigh since 2008. But change is on the way. 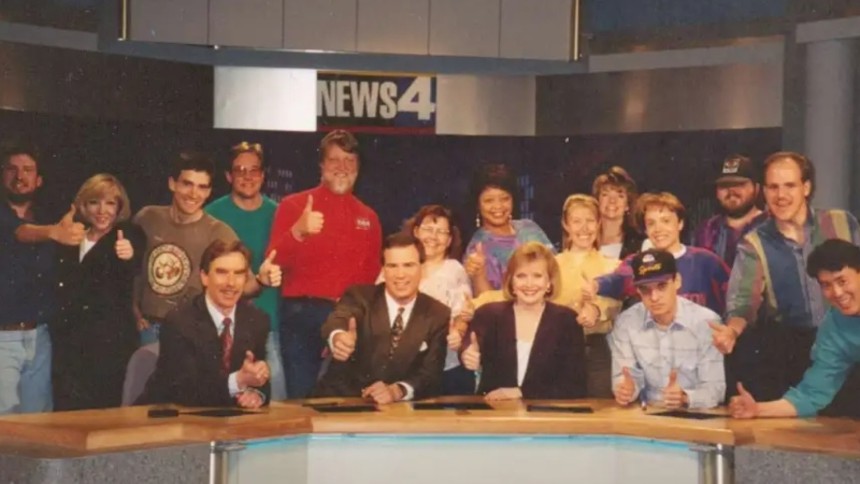 Jim Benemann, center, with the CBS4 Denver news crew in 1994, shortly before leaving for a stint at KGW in Portland, Oregon.
CBS4 Denver
The Benemann story begins when he was growing up in the Chicago suburb of Wilmette. "I was able to read Mike Royko and so many great columnists in the newspaper and watch this cast of great TV reporters and anchors — and I thought the TV thing could be exciting and rewarding," he says. Northwestern University, which boasts one of the great journalism programs in the country, was in the next town, "but I didn't have the grades or the resources to write a tuition check there," Benemann recalls. "So I called over and said, 'I'm really serious about getting into this as a career. Do you know of other universities that are doing it right on the TV side?' They sent me a list — and CSU was on it. That's what led me out here."

While studying at Colorado State University, Benemann made a connection at Denver7. After taking his first television job in 1978 at a Davenport, Iowa, station with the call letters WOC ("The letters stood for 'Wonders of Chiropractic,' because it was owned by the Palmer School of Chiropractic Medicine," he reveals), Benemann was hired by 7 as a news writer and assignment manager. "I also produced Channel 7's weekend 5 p.m. newscast, and Bill O'Reilly was one of the anchors," he recalls, adding that O'Reilly was "the same blowhard he was when he became famous. But we were 23-year-old punks working on the show, and we gave him even more crap back than he gave us — and I think he had a kind of grudging respect for it."

After fourteen months at Denver7, Benemann scored an on-air position in the Salinas/Monterrey, California, market, where he specialized in reporting on Santa Cruz County for the princely sum of $14,000 per annum. Just over a year later, he was hired to cover Boulder County for 9News, then owned by the national media firm Gannett, which subsequently assigned him to work in its Washington, D.C., bureau. He stayed there for three years before returning to 9News as the weekend sports anchor. But while he describes himself as "a huge sports fan," he determined that "it wasn't my thing." So he shifted to anchoring the station's morning news program before figuratively moving across the street to CBS4 Denver. He talks up his five years there as weekend news anchor and reporter: "It had such a great family atmosphere, and my co-anchor was Kathy Walsh, who's just a terrific journalistic friend. I got great experience and prime-time exposure."

Nonetheless, Benemann's goal was to be a top anchor, and in 1994, he got that chance at KGW in Portland, Oregon. But while he enjoyed his time in the Pacific Northwest, he wanted to come back to Denver, and 9News made that happen: He was hired to anchor the 5 p.m. weeknight newscast but subsequently shifted into the main anchor slot alongside Arakawa. 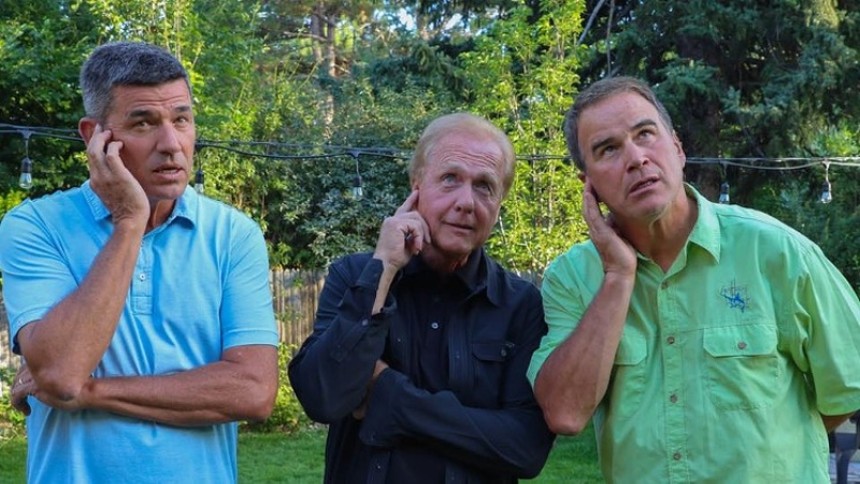 A 2017 photo of 9News anchor Tom Green, former 9News anchor Mark Koebrich and Jim Benemann engaging in a "'Newsman Pretending to Listen to Producer' competition."
Courtesy of Tom Green
"I was there for six years," Benemann says. "Then Bill Stuart, my old buddy from CBS4, was getting set to retire, and the general manager gave me a call — and they made a very good offer. It was great to get back to Channel 4."

Local TV has seen tremendous upheaval in the nineteen years since then. "Reporters are still going out there every day on assignment, and they're still working on a deadline to get something that will show up on a CBS4 newscast," Benemann acknowledges. "But what's changed is that we're delivering that information on so many different platforms. The days of expecting that everybody, and especially young people, will get their news by sitting in front of a television at an appointed hour are over. Some people will view it on the TV schedule, but most people won't. So we're trying to break fresh stories online, and we have a 24-hour streaming site, CBS News Colorado, where people can go and get updated information anytime."

Another difference: Editorial staffs are much tighter, with more multimedia journalists, or MMJs, who serve as their own camera operators and write and edit stories, for reasons having everything to do with dollars and cents. "There certainly are budget constraints and economic considerations," Benemann concedes. "But I think if you look at the product we churn out today, I would say it stands up extremely well to the reporting and production values of 25 years ago."

Now he's looking ahead to a life outside of television. Benemann says that he and Karen, his second wife, are "a Brady Bunch family," with a total of eight children and five grandchildren from their collective unions. Hanging out with them is a priority, as are trips abroad. They'd love to visit Slovenia — a junket there was called off "when the ’rona hit," he divulges — and New Zealand is high on their wish list, too.

In the meantime, he'll have a chance to take stock over the next six months or so. "The esprit de corps in the newsroom is just off the charts," he says. "It's always been such a high-energy, supportive, congenial place to go, and I'll certainly miss that. And I'll miss the tremendous colleagues I've had over the years. But I'm a news junkie, and I'll continue to be a voracious news consumer. I just won't be able to pass that news along to viewers every night.

"Looking back after 44 years, from that first job in Davenport to now, it's been a heck of a ride. I'm glad I was able to hold on."
KEEP WESTWORD FREE... Since we started Westword, it has been defined as the free, independent voice of Denver, and we'd like to keep it that way. With local media under siege, it's more important than ever for us to rally support behind funding our local journalism. You can help by participating in our "I Support" program, allowing us to keep offering readers access to our incisive coverage of local news, food and culture with no paywalls.
Make a one-time donation today for as little as $1.