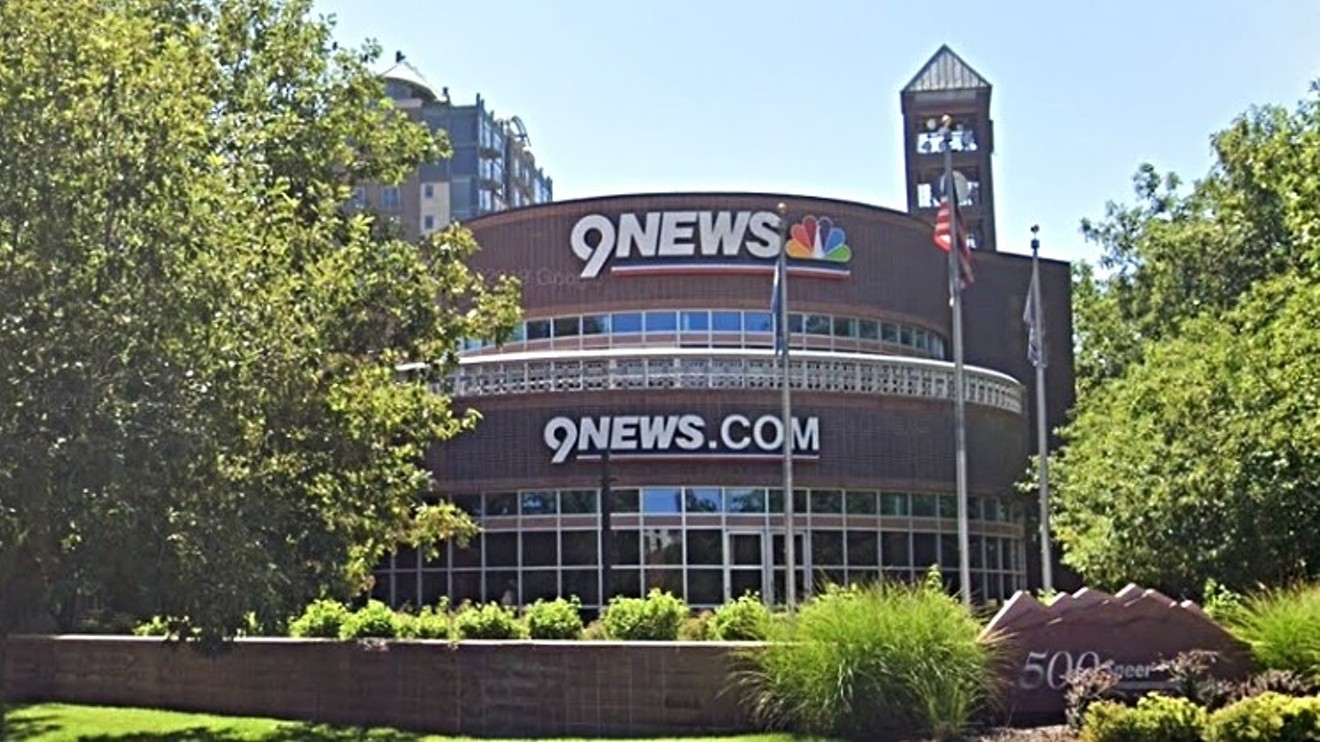 9News is located at 500 East Speer Boulevard. Google Maps
Denver’s 9News is among the most successful and respected regional television stations in the country, known for first-rate journalism that connects with the local audience. The outlet’s newscasts have been ratings leaders in the Mile High City for decades, and plenty of its reporters and anchors have graduated to larger markets or major networks.

But this level of excellence can come at a high cost. According to eight past and present 9News employees, the station can be a hostile workplace, particularly for young women journalists. While their experiences varied, the employees (we agreed to keep their names confidential) described a culture in which disrespect is commonplace and they found little support. They said that they're treated as if they're disposable, and can be tossed aside if they express concerns, since managers — both females and males — know there are many other fledging reporters who will eagerly take their place.

Megan Jurgemeyer, news director for 9News and designated station spokesperson on this subject, pushes back on some of these assertions. But, she acknowledges, "We’ve spent a lot of time reflecting, talking to journalists who’ve been here a long time and those who’ve recently joined. Through those conversations, we’ve recognized that a newsroom with standards like ours can be a little intimidating to someone just joining us. For that reason, we’ve put some serious thought into how we can be more welcoming and supportive to new hires."

"LatinXed: 9News Got Rid of Three Latina Reporters This Past Year, Including Me," an essay by former 9News reporter Lori Lizarraga published by Westword in March, focused national attention on 9News. Among other things, Lizarraga criticized some of the language used by the station in its coverage of Latinx issues, and the next month, TEGNA, 9News's parent company, told reporters to stop using the term "illegal immigrants." However, a new firestorm erupted shortly thereafter, thanks to a filing with the U.S. Securities and Exchange Commission that asserted "a broad pattern of bias and racially-insensitive behavior" at 9News and TEGNA.

The sources who spoke with Westword for this story also pointed to the challenges faced by journalists of color at 9News, including the perception that they are not being given an equal opportunity to advance at the station. But an alleged bias against young women journalists regardless of ethnicity was a regular theme as well.

To be clear, none of the sources accused anyone at the station of engaging in sexual harassment or abuse. But we heard over and over about long hours, public criticism, unreasonable demands that weren't made of young male journalists, a sense that complaints to human resources would have negative career repercussions, and a basic attitude that young female journalists were interchangeable.

Moreover, a number of the sources who worked at other TV stations either before or after their time at 9News said that they didn't experience a similar dynamic elsewhere. The majority saw a culture problem at 9News, where executives, supervisors, managers and the like, including both women and men, took advantage of the station's national reputation by assuming that if one young female journalist failed to survive the gauntlet, there'd be another one to replace her. And some contended that many veterans at the station are afraid to speak up on behalf of younger colleagues for fear that their jobs might be threatened.

Is it possible that managers are merely trying to thicken the skin of young women journalists so they'll have the tools to survive and thrive in an industry that still hasn't entirely shrugged off the sexism of previous generations? Our sources don't see it that way. Indeed, several suggested that female managers seemed to view young women journalists as threats rather than individuals they wanted to elevate on either a personal or professional level, leaving them with a sense of what they characterized as post-traumatic stress disorder from their time at 9News.

Moreover, Jurgemeyer points out that since January 2020, 57 percent of news and digital hires have been women, with 52 percent of them people of color, 28 percent of whom identify as Latinx. Overall, 34 percent of newsroom staffers are journalists of color. Between January 1, 2020, and June 10, 2021, the newsroom had a turnover rate of 13 percent, with women representing just over half (53 percent) of the departures.

"We have taken steps to build a more diverse and inclusive newsroom, listening to our employees and ensuring we have the training and culture in place so that our journalists can come to work and feel heard and be their true selves," Jurgemeyer explains. "This includes new initiatives like an Inclusive Journalism program we developed with Poynter last year, a Diversity, Equity and Inclusion employee group –- also launched last year — and new onboarding and mentorship programs across our newsroom.

"We’ve expanded the training process so, beyond times with managers, employees spend several days shadowing their peers. We’re getting them time in the communities they’ll cover, so they can learn more about them and make connections. And we’ve started pairing our newest journalists with ‘buddies’ who’ve been here a while to serve as sounding boards, confidants, advisors…a person to turn to for guidance outside of the management structure."

Another area identified as a priority, Jurgemeyer continues, "is the need to give our team members ongoing feedback, regardless of position or tenure with 9News. That’s one of the primary reasons we recently promoted our dayside executive producer to the position of assistant news director. By expanding our management team and more evenly distributing direct reports, we can offer more one-on-one attention in our large newsroom."

Jurgemeyer concludes with this: "As we look ahead, we recognize there is more work to do and are committed to working with our colleagues to create safe space for all our journalists to feel supported throughout their time at 9News."
KEEP WESTWORD FREE... Since we started Westword, it has been defined as the free, independent voice of Denver, and we'd like to keep it that way. With local media under siege, it's more important than ever for us to rally support behind funding our local journalism. You can help by participating in our "I Support" program, allowing us to keep offering readers access to our incisive coverage of local news, food and culture with no paywalls.
Make a one-time donation today for as little as $1.