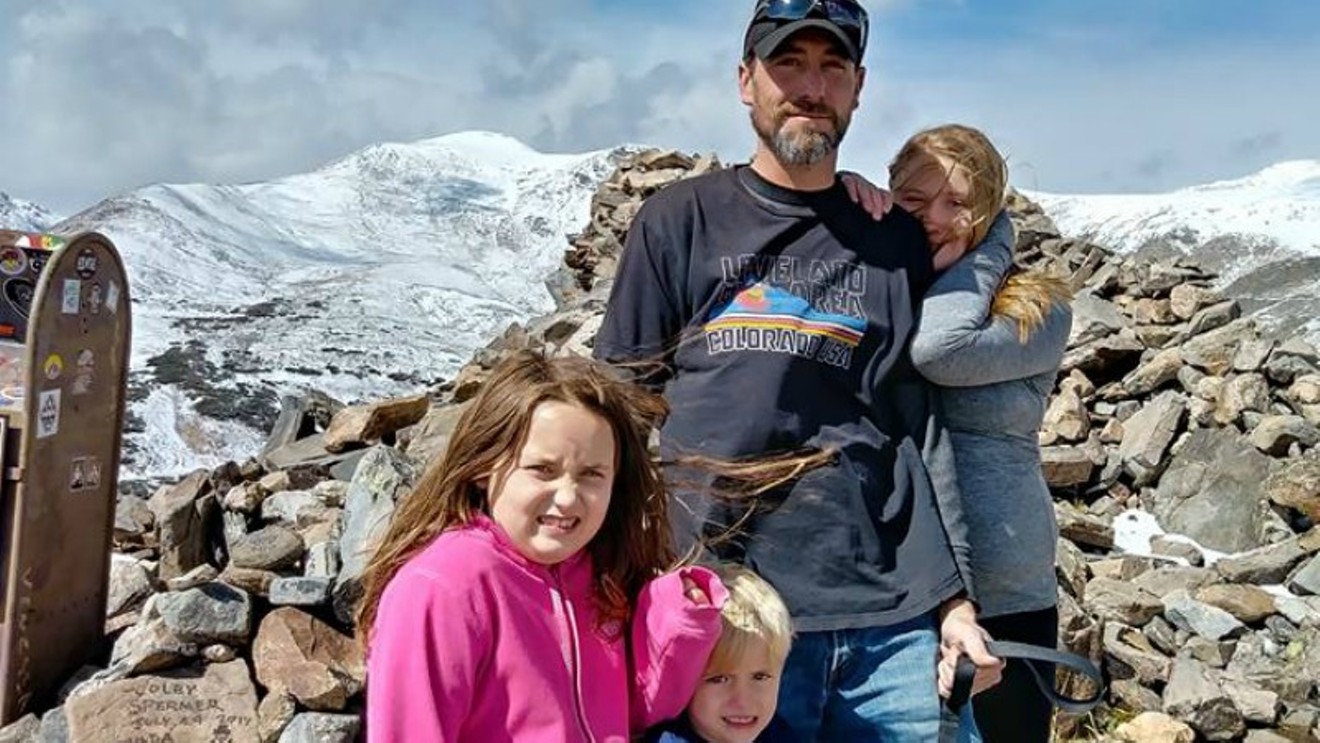 Adam Lee wearing a Loveland T-Shirt while posing with his kids in a photo shared in October 2017. Facebook
Late last year, as we've reported, Loveland Ski Area employee Adam Lee was killed while working on the Magic Carpet, a conveyor belt-type lift for beginning skiers. Now, Erika Lee, Adam's widow, has created a website, AdamLeeTruthLoveland.com, that accuses the resort of, among other things, floating false stories about Adam being suicidal. The address, whose pages include a warning that "if this blog or website gets blocked, it means Loveland did it," remains accessible at this writing. However, Erika, who's also provided documents linked below, says resort representatives have demanded that she pull it offline.

When asked about the website, ski area spokesman John Sellers, corresponding by email, writes, "Mrs. Lee’s and Loveland’s legal counsel have been in contact with each other. However, given that the OSHA investigation" — a reference to an ongoing inquiry by the Occupational Safety and Health Administration, whose report isn't expected for months — "and the autopsy report have not been completed, Loveland cannot comment on this tragic accident. Loveland has and continues to cooperate with OSHA, the Colorado Passenger Tramway Safety Board and the Clear Creek County Sheriff’s Department in their investigations."

Sellers adds: "Our thoughts and prayers remain with the family and friends of Adam Lee." 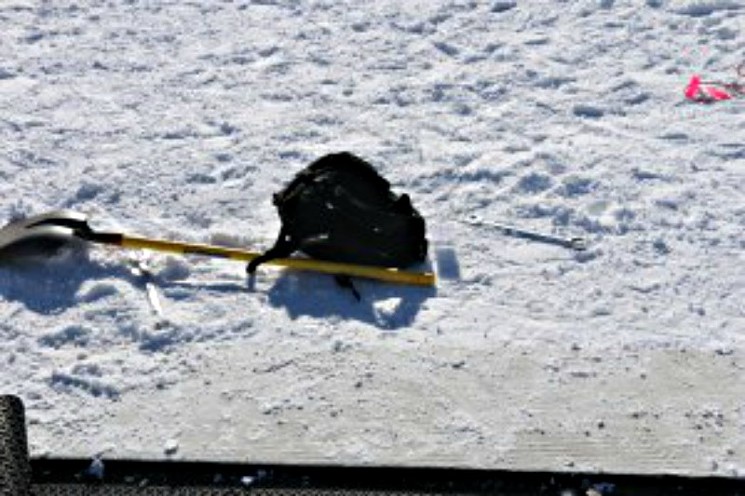 A photo of Adam Lee's backpack, as shared on the website.
adamleetruthloveland.com
In our previous coverage about Adam's death, we noted that a report about the accident issued by the Colorado Passenger Tramway Safety Board revealed that there was nothing mechanically wrong with the lift, which didn't stop until its mechanism crushed Lee to death, but leaves unanswered questions about why he was working beneath it for more than an hour.

According to the Colorado Passenger Tramway Safety Board report, the Magic Carpet was fired up for the first time on December 28 at around 9 a.m., and its operator "observed no indication of mechanical or electrical problems with the conveyor."

At between 10:15 a.m. and 10:30 a.m. that morning, the operator saw Lee arrive at what's described as the "top terminal." Lee is said to have "smiled and waved to the operator as he opened the hatch cover of the conveyor and accessed the crawl space" under it.

The report stresses that "the conveyor was in operation at this time and continued to operate normally to the skiing public" — a statement that's quizzical on two levels. For one thing, the Magic Carpet's operator hadn't called for lift maintenance, the report states. But he didn't switch off the beltway as Lee climbed beneath it even though "industry standards prohibit the performance of maintenance beneath a conveyor while the conveyor is in operation."

Moreover, Erika says maintenance employees were supposed to work on the lift in pairs, not solo, as a way of enhancing safety.

At 11:22 a.m., the Magic Carpet automatically stopped. The initial indication was "an overspeed fault," the document allows. The beltway's operator responded by notifying lift maintenance of the problem, and a repair worker arrived within minutes. 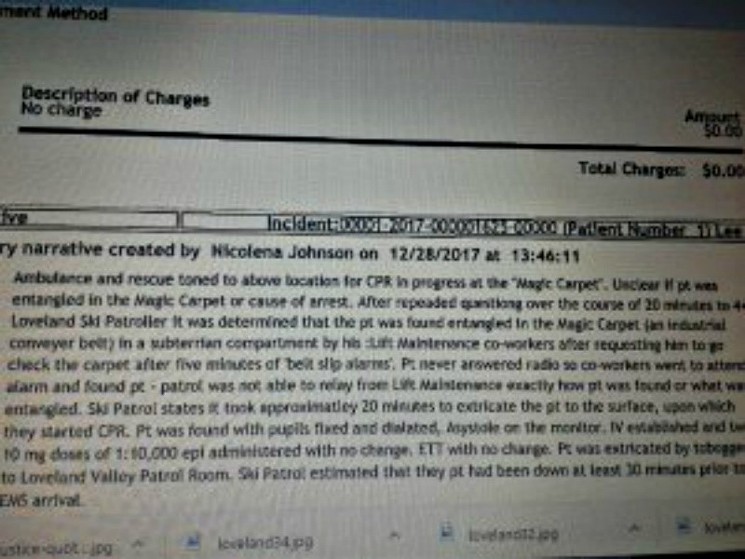 A document pertaining to the accident reproduced on AdamLeeTruthLoveland.com.
adamleetruthloveland.com
The report doesn't say whether or not the employee was informed about Lee having climbed beneath the lift around an hour earlier. Instead, it simply points out that the staffer attempted to "clear the overspeed fault and restart the conveyor belt," but "each restart immediately indicated a speed reference fault and the belt did not move."

The repair worker suspected "an ice buildup on the drive or return roller that was jamming the roller and prohibiting belt movement," the document continues — so he accessed the top terminal crawl space and began looking under the conveyor. That's when the employee "discovered the entanglement" caused by Lee's body.

The maintenance worker quickly cut the conveyor belt and pulled the tension roller in order to extract Lee, who was subsequently pronounced dead. An autopsy found that he died from crushing chest injuries.

The concluding section of the document acknowledges that "the reason Mr. Lee would enter the tunnel beneath the conveyor remains unclear." But the inquiry confirmed that "there was no malfunction of the passenger tramway related to this incident. In fact, the conveyor properly shut down when the return deflection roller jammed at the time of entanglement." Hence, "the fatality that occurred on December 28, 2017, at Loveland Ski Area was not the result of a possible malfunction of a passenger tramway."

On AdamLeeTruthLoveland.com, Erika doesn't espouse a specific theory about what killed Adam, but she uses a previous incident to call Loveland's commitment to safety into question. On September 11, 2017, according to Erika, "my husband and another lift maintenance employee were asked to dig six-foot post holes on lift three. My husband [was] digging when, at four feet down, he hit two 480 volt three-phase wires. Now, luckily, for some unrelated reason, the power had been turned off. But if power was on, it would have caused a massive explosion."

The account adds: "What saved their life that day was that this electrician that had observed the digging along with another co-worker had already shut the power down." 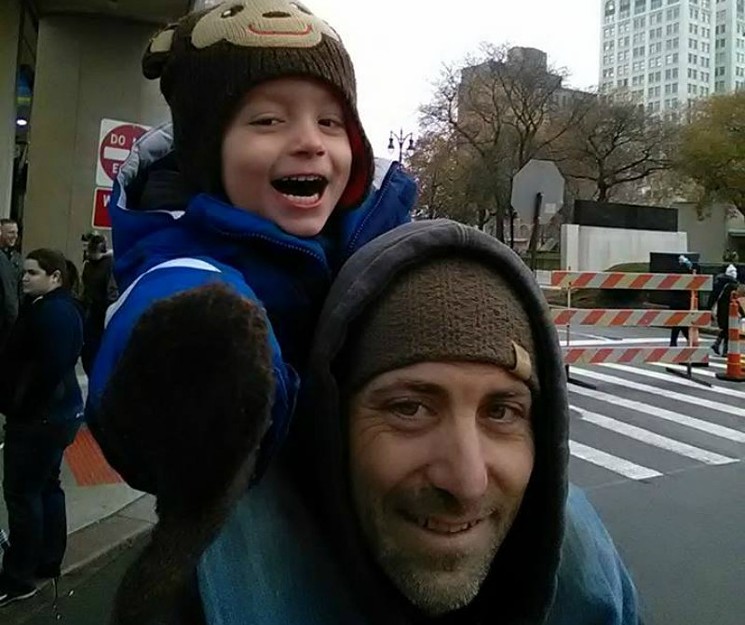 Adam Lee and his son circa 2016.
Facebook
In another section of the site, Erika insists that Lee's superiors "sent him down there" to work on the Magic Carpet — a claim that appears to echo a passage in a patient care report from Clear Creek County Emergency Medical Services, which can be accessed at the bottom of this post. The narrative states that "repeated questioning over the course of twenty minutes to four-plus Loveland Ski Patrollers" determined that Adam's maintenance co-workers had found him entangled with the lift's mechanics "after requesting him to go check the carpet after five minutes of 'belt slip alarms.'"

More contradictions can be found in interviews conducted by the Clear Creek County Sheriff's Office; they, too, are linked below. A couple of mentions about the possibility of Adam being suicidal crop up in witness statements, but Erika insists they weren't contemporaneous with the accident; rather, they date back to six years ago, when he suffered from depression following the death of an infant son. Nonetheless, she maintains that Loveland reps ran the suicide theory past folks at the coroner's office prior to the incident being deemed accidental — although she has yet to receive a death certificate.

Additionally, the sheriff's office report includes an email from a source who makes assorted charges against the lift operator that a law-enforcement source characterizes as uncorroborated. Other website passages focus on how Erika's criticisms of the way managers allegedly behaved when notifying her about the accident, plus issues with funeral expenses and the like.

Material has been popping up daily on the site over the past week or so, and Erika stresses that she remains committed to regularly updating it, no matter how personally agonizing the process may be for her. As she puts it, "I really feel the truth needs out there or this could happen again."