How Adams County Is Dealing With High-Risk COVID-19 Status 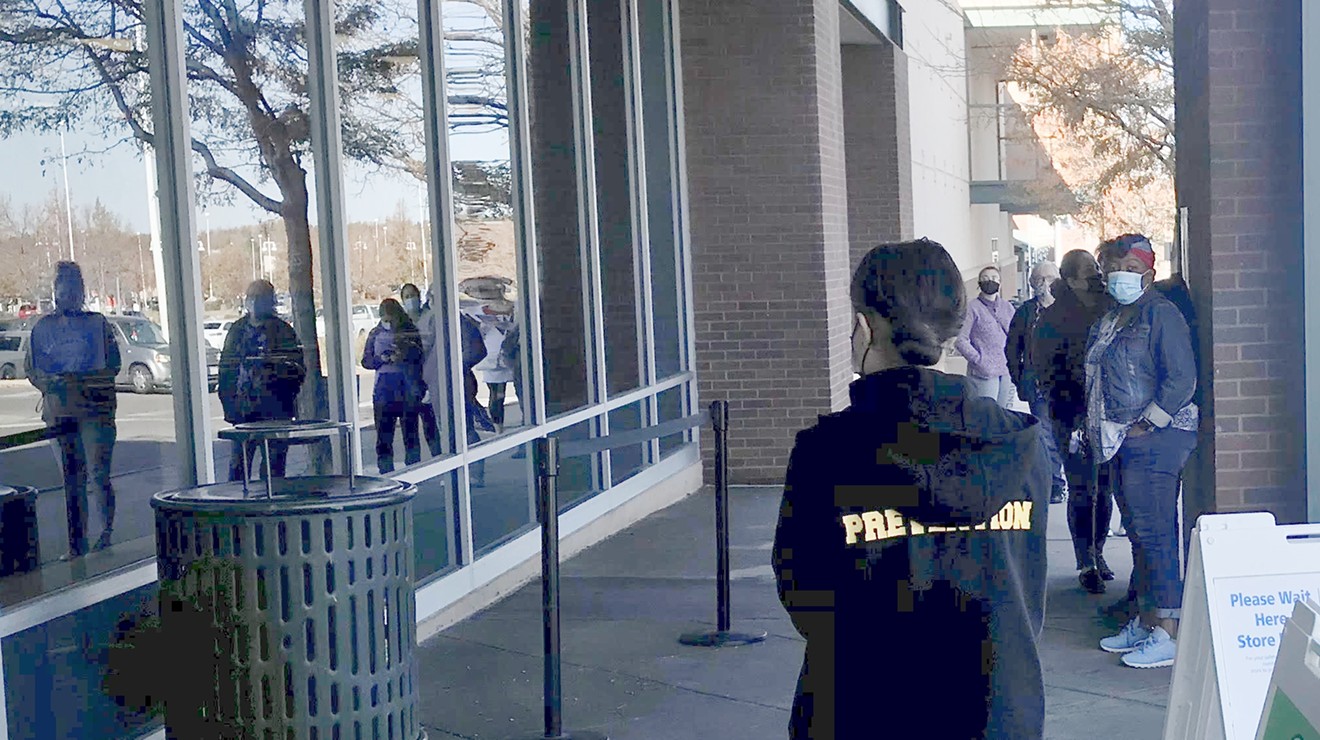 Customers line up outside a Ross Dress for Less store in the Northglenn Marketplace shopping complex. Photo by Michael Roberts
On November 4, Boulder, Jefferson and Summit counties announced that they're about to enter the COVID-19 high-risk category as designated by the Colorado Department of Public Health and Environment — a status that's now called Safer at Home Level 3 to Level Orange.

Denver reached this same classification in late October, shortly after Adams County became the first metro municipality to move up the CDPHE dial because of spiking case counts. The only notch higher is Level Red, formerly Stay at Home (Severe), which would require any businesses that aren't considered essential to shut down, as happened statewide this past spring.

To get a sense of how Adams County is dealing with the growing risk of widespread closures, we spent Saturday, October 31, in two very different parts of the diverse area: Brighton, a modest outlying community with a strong agricultural tradition, and Northglenn, a burgeoning suburb just up Interstate 25 from Denver proper.

The approaches taken by Brighton retailers and managers at the Northglenn Marketplace, a gaggle of box stores on the site of an old mall, varied considerably. There were few signs of stricter standards in Brighton. In Northglenn, meanwhile, a substantial number of businesses had tightened up procedures — though some others appeared to be conducting pandemic-era business as usual.

In Brighton, the Walmart branch didn't appear to be monitoring capacity.
Photos by Michael Roberts
Among the dozens of stores we cruised by in Brighton, ranging from a King Soopers to mom-and-pop shops, we didn't see a single one monitoring capacity to allow for greater social distancing. At the Walmart in the downtown area, customers were allowed to enter at will rather than wait for admittance on a one-in, one-out basis.

True, a Walmart employee was at the front door, but his main duty was apparently to offer a mask to any patron without one. And whether he had license to prevent those who refused to take a facial covering from entering was unclear: Within fifteen seconds of stepping inside the store, we saw a naked-faced man, and we stumbled upon a couple more as we wandered the aisles.

Yep, they were all white dudes of the sort you could imagine thrusting their fist into the air and bellowing, "Freedom!"

Fortunately, the overwhelming majority of Brighton Walmart shoppers were masked, but often incorrectly. At least 20 percent wore their facial coverings under their noses, and one woman actually had hers on her chin, as if that was the body part most likely to emit the virus.

The Spirit Halloween store in the Northglenn Marketplace admitted patrons on a one-in, one-out basis, but the Lowe's store was wide open.
Photos by Michael Roberts
Still, there was one heartening scene: We saw a middle-aged woman telling an elderly woman who appeared to be her mother to make sure her mask didn't slip below her nostrils. The older woman seemed frustrated and snappy, but reluctantly complied.

The scene was more complicated at the Northglenn Marketplace. Given that this was October 31, the Spirit Halloween outlet was mobbed — but customers in search of a last-minute costume were required to line up on the sidewalk rather than pour inside en masse. Mere steps away, though, a Lowe's outlet had no entry restrictions, and a trio of people in front of us with assorted mask issues (one worn as intended, one stretched beneath the nose, one absent entirely) were welcomed with open arms.

The most careful capacity monitoring we saw was at the Ross Dress for Less outlet (pictured at the top of this post). A long queue of shoppers waited patiently for their turn — but a couple of storefronts away, we heard a woman venting her spleen into a cell phone. "Everywhere I've gone today, there's been a line!" she complained.

At least all of those places were open — for now, anyway.
KEEP WESTWORD FREE... Since we started Westword, it has been defined as the free, independent voice of Denver, and we'd like to keep it that way. With local media under siege, it's more important than ever for us to rally support behind funding our local journalism. You can help by participating in our "I Support" program, allowing us to keep offering readers access to our incisive coverage of local news, food and culture with no paywalls.
Make a one-time donation today for as little as $1.