Led by a Desire to Help the World, Jewish Politicians Take Charge in Colorado 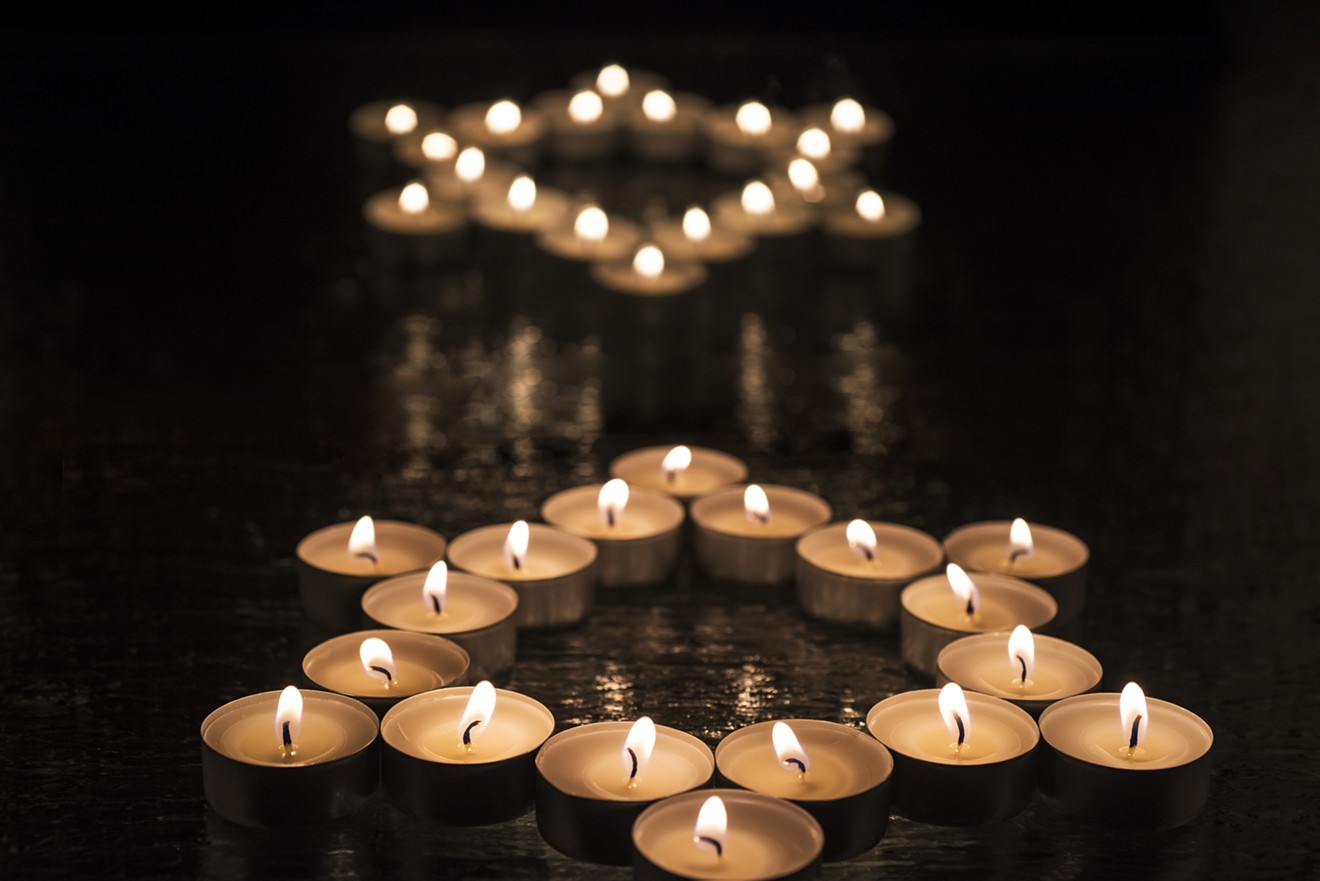 FreedomMaster/iStock
As Democrats swept to power in Colorado this fall, many national headlines focused on Jared Polis becoming America's first openly gay governor as a point of increased diversity in the Centennial State. Joe Neguse's election as Colorado's first African-American congressman drew other such headlines.

But what traveled under the radar was the fact that several prominent Jewish candidates, including Polis, Griswold and Attorney General Phil Weiser, are the first Jews elected to constitutional statewide offices in Colorado's history. Along with Democratic Senator Michael Bennet and Representative Ed Perlmutter, many leaders of the Colorado Democratic Party are of the Jewish faith or some mix of religions, as was the case with Bennet, who was raised in a Christian and Jewish household.

The rise of Jewish politicians in Colorado could be seen by some as a coincidence, but there are strong ties between the actions of Donald Trump's administration and a perceived violation of Jewish values and history that are prompting more Jews to seek political office.

For one thing, successful Jewish candidates have been mostly Democrats. And it's not just the trifecta at the top of the Democratic ticket in Colorado; high-level figures, from statewide Democratic Party Chairwoman Morgan Carroll to Communications Director Eric Walker, along with a laundry list of behind-the-scenes Democratic operatives and state representatives, are also Jewish, an impressive feat for a relatively small religious minority. Approximately 102,000 Coloradans are Jewish, according to a 2017 estimate from the Jewish Virtual Library, or about 2.5 percent of Colorado's population — slightly above the national average of 2.1 percent.

"Judaism is a religion composed of nomadic people with a history of persecution and being a minority culture among a majority. It puts a high degree of importance on caring for those that are oppressed, dejected, or in need," says Rabbi Mark Goodman, who practiced in the Denver area for seven years before recently moving to Pennsylvania. "Jewish practice and thought care deeply about rigorous intellectual exploration. Judaism is a religion that puts a huge premium on carrying out justice methodically, fairly, and with consistency.

"The current president of the United States is the polar opposite and the anathema of everything I just listed above."

Along with left-leaning ideology, Jews also value community, much like Vermont Senator Bernie Sanders, a self-described socialist who is also Jewish (and who remains a visible and popular figure in Colorado).

"Jews as a people, as a culture, are extremely communal," says JoyAnn Ruscha, a Jewish Democratic political operative. "Naturally, if you grow up in a culture where you are taught to feed the stranger, that public education is valued, that health care is a human right, that you are literally responsible for your brother, then it's not inconceivable that as you get older and you become voting age, that you are going to vote for the party that says we lift each other as we rise."

Immigration is a particularly sensitive subject for many Jews, and it's a topic that many Jewish candidates touched on when asked during debates about the ties between their faith and their decisions to run for office. During the Holocaust, asylum-seeking Jews were turned away from most non-European countries — including the United States — and were often forced to return to Europe, where many eventually met their death in concentration camps. Many of the U.S.'s current asylum policies were born from that dark episode in our history.

Weiser's mother, Estare, was born in the Buchenwald concentration camp just one day before American troops liberated it in April 1945.

"When I was running for office, part of what people had said to me was, 'Phil, you need to tell people who you are and where your values come from,'" Weiser says. "So I talked about my mom's story, which was formative, because I had a very close relationship with my grandparents. They talked regularly about surviving the Holocaust, about what that experience meant, and about what the experience of coming to the United States meant to them. 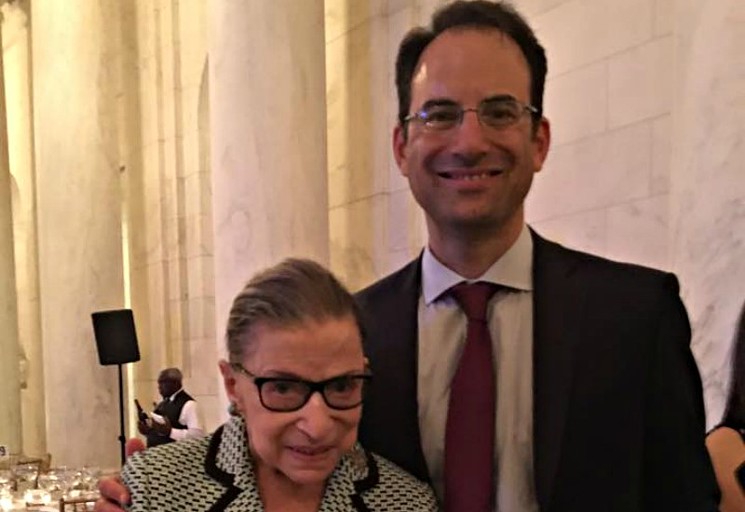 Phil Weiser clerked for U.S. Supreme Court Justice Ruth Bader Ginsburg, as well as for the late Byron White.
Facebook
"This was obviously pertinent, because there was a lot of public discussion about immigration, about the rule of law. Issues like the Muslim ban were in the news, families being separated at the border, and both of those connected to the role of the attorney general as an official who has the ability to stand up for critical constitutional values in the rule of law," Weiser continues. "For me, it was and remains natural to talk about my family's history — the values, surviving the Holocaust, holding on to your religion, coming to this country that believes in religious freedom. Coming from that beginning, like my mom being born in a concentration camp, to me getting a chance to clerk for Justice [Ruth Bader] Ginsberg, work for Barack Obama in the White House and now being Colorado's attorney general, it is an only-in-America story."

With asylum-seekers and migrants now finding entry into the United States increasingly difficult if not impossible under the Trump administration, Jews feel a sense of obligation to help, Carroll says. More specifically, there's a deeper sense of tikkun olam — an ancient Hebrew phrase that dictates that Jews are tasked with improving the welfare of society at large.

"One reason we may have seen an increase in Jewish candidates running could be in part due to a religious concept we hold of tikkun olam, or healing the world," Carroll says. "This religious imperative requires us to do our part to try to make the world a better place. The world is clearly broken right now, and we have a moral responsibility to try to repair it. It's why I ran as chair.

"It seems to me that the Jewish people are community-minded. They have to have been to have survived as a discreet ethnic group for as long as they have."

"The second possible reason is that we have taken 'never forget' to heart from painful lessons from the Holocaust as we recognize Yom Hashoah every year, or a day of remembrance," Carroll continues. "As we see Trump and other national leaders vilify and dehumanize other people, coupled with a love of power and disdain for democratic principles, many feel we must act urgently to preserve freedom, respect and equality for all. For Jews, we must remember when it was us and be there when someone else is being targeted."

"It seems to me that the Jewish people are community-minded. They have to have been to have survived as a discreet ethnic group for as long as they have," says Cole, whose mother's family hails from a long line of Jewish Republicans. "And politics is most often an arena for people who are interested in the fate of their communities and societies. So there could be some sort of nexus between that Jewish history on the one hand and the nature of politics on the other.

Trump's cabinet and immediate family is filled with prominent Jews, and Trump and the GOP often tout their strong support for Israel as a bedrock policy staple (and Israel's government is pretty cozy with the Trump administration). Trump's daughter Ivanka is a converted Orthodox Jew, and her husband, senior White House adviser Jared Kushner, is from a prominent Jewish family in New York City. Perhaps the most controversial behind-the-scenes figure in the White House, senior policy adviser Stephen Miller, is also Jewish, along with Treasury Secretary Steven Mnuchin and Larry Kudlow, the director of Trump's National Economic Council. The single-largest Republican financial donor — by far — in this year's midterms is also Jewish: Nevada casino mogul Sheldon Adelson.

But even with more-than-token GOP representation at both the state and national level, there's little doubt where Jews' political preferences lean. A post-2016 election analysis by Pew Research found that about 71 percent of Jewish-Americans voted for Hillary Clinton, the largest pro-Clinton religious bloc in the Pew study.

And there's also little doubt that Trump's policies are driving Jews not only to the polls, but to run for office and increase their engagement here locally.

"I think voters are more interested in a candidate’s values and plans than their religion, skin color, sexual orientation, etc.," the Democrats' Walker says. "That being said, it’s kind of fun to imagine Trump throwing a temper tantrum over all of the women and people of color elected to Congress who will be holding him accountable come January."

Since Trump took office, there's been a rise in anti-Semitism nationwide. A shooting at a Pittsburgh synagogue in October left eleven people dead, the single-largest attack on Jews in American history. Far-right conspiracy theories frequently center around George Soros, the billionaire Holocaust survivor who has provided financial support for liberal causes, and there's a sense that such theories are a form of anti-Semitism.

But overriding any fear is an intrinsic desire of Jews around the U.S. to help and improve the world.

"I was on the campaign trail for both the Charlottesville march and during the Pittsburgh synagogue shooting," Weiser says. "Both of those events shook me, and obviously they both speak to the fact that we do have anti-Semitism.

"I think what I would say to people is the reaction to the synagogue shooting, including the gathering we had in Colorado, speaks so much more to me about what Colorado and America are about, and we need to keep encouraging to bring out the best in who we are," he continues.
KEEP WESTWORD FREE... Since we started Westword, it has been defined as the free, independent voice of Denver, and we'd like to keep it that way. With local media under siege, it's more important than ever for us to rally support behind funding our local journalism. You can help by participating in our "I Support" program, allowing us to keep offering readers access to our incisive coverage of local news, food and culture with no paywalls.
Make a one-time donation today for as little as $1.