We Brake for History on East Colfax Avenue 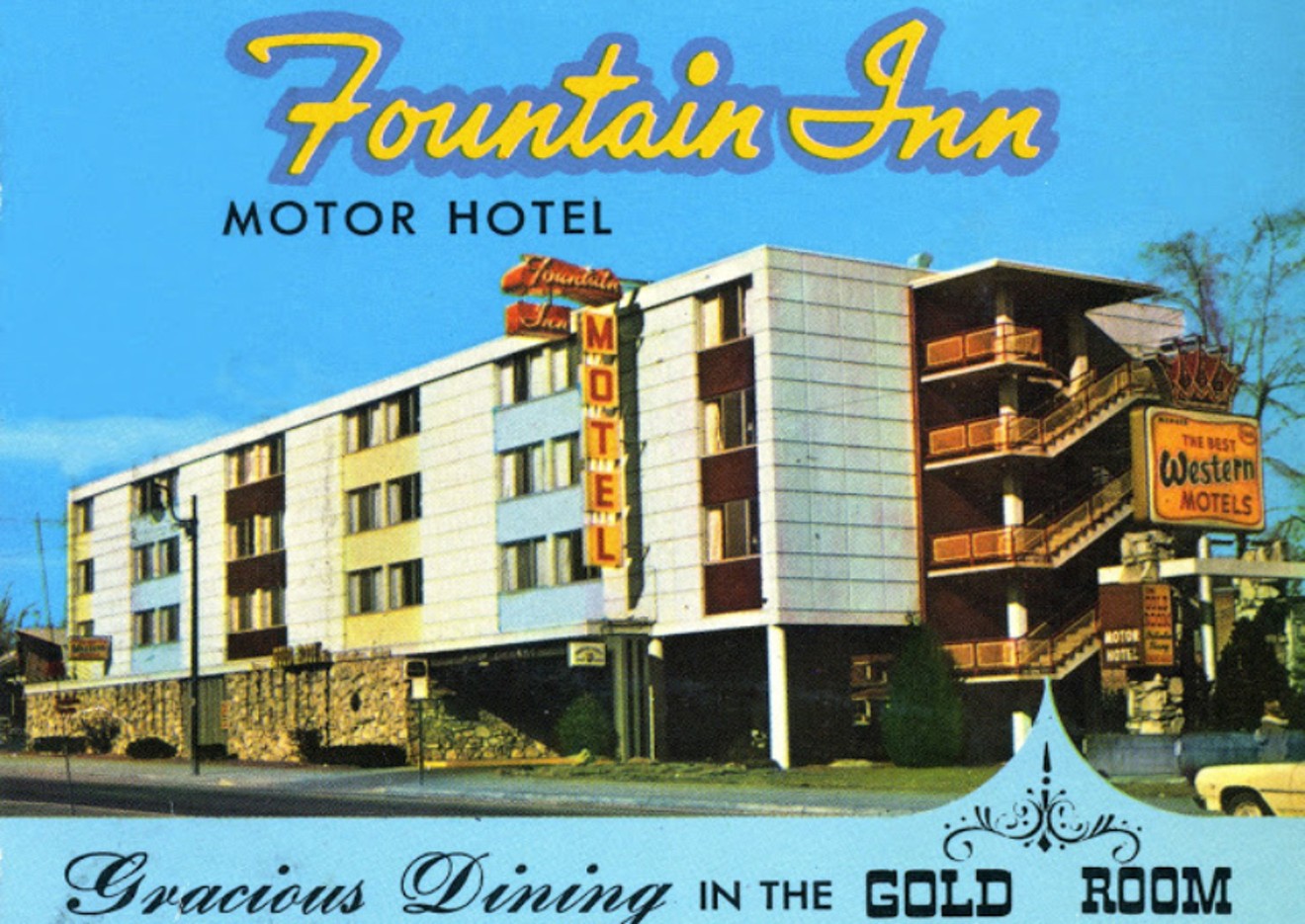 The Fountain Inn catered to tourists who were driving along Colfax Avenue as they traversed the U.S. Courtesy of Colfax Museum
The All Inn Motel, which once housed the legendary Rockbar, is closing in on receiving historic-property status from both the state and federal government.

On May 15, the fifteen-member Colorado Historic Preservation Review Board voted unanimously to approve the motel owner's application. The application will now go to the National Register of Historic Places for final approval; if it's granted, the motel, which got its start in the late ’50s as the fabulous Fountain Inn, will be added to both the state and national registries of historic places.

"They all agreed with the argument put forward in the nomination — specifically, that the Fountain Inn is historically significant for the role it played in East Colfax Avenue’s development over time into one of Denver’s most important commercial and entertainment districts, and that it is architecturally important as an excellent example of a post-World War II International Style motel," says Amy Unger of History Colorado. "Well-preserved examples of mid-century modern motels like the Fountain Inn are relatively rare along East Colfax, and oftentimes underappreciated. It is wonderful to see the historical and architectural importance of this property recognized and celebrated."

For Brian Toerber, the Lakewood native who bought the property four years ago, getting Colorado's approval was a significant milestone. "It felt good," he says. "It was the culmination of a lot of hard work getting it this far."

Although the All Inn remains operational, Toerber has spent the past few years working on a project to revitalize the property at 3105 East Colfax Avenue and create a boutique hotel there, complete with a pool, restaurant and lounge that would be a neighborhood focal point.

Historic designation would make the project eligible for tax credits of up to 20 percent. "It’s so important, because it helps the financial viability," Toerber explains. "It’s another thing that we have access to, another tool to help bring this project to fruition. It’s the first real win that we’ve had. It’s been a long ride."

While the motel complex has a storied, sixty-year history, the application for historic status focuses largely on the site's first decade in business.

In the post-World War II era, Colfax Avenue was widened to accommodate growing automobile traffic. The road became a major thoroughfare for not just metro Denver residents, but Americans traveling across the country. Motels, paired with catchy neon signs, began to pop up along Colfax to cater to these tourists.

Construction of the $1 million Fountain Inn was completed in 1959. The four-story motel had 54 rooms and a white stone facade that caught the eye of passersby. Ads from that time described it as a "Deluxe Motor Hotel" and a "Home Away From Home" that had rooms outfitted with radios, TVs and musical equipment, "making it a cutting-edge hospitality experience."

The Fountain Inn was also home to the Gold Room, a restaurant that was a draw for tourists as well as residents, who'd come in for a fancy meal and to listen to live jazz piano performed by Frank White, who, the historic application points out, later wrote the official theme song of the Denver Broncos, "Mighty Broncos." 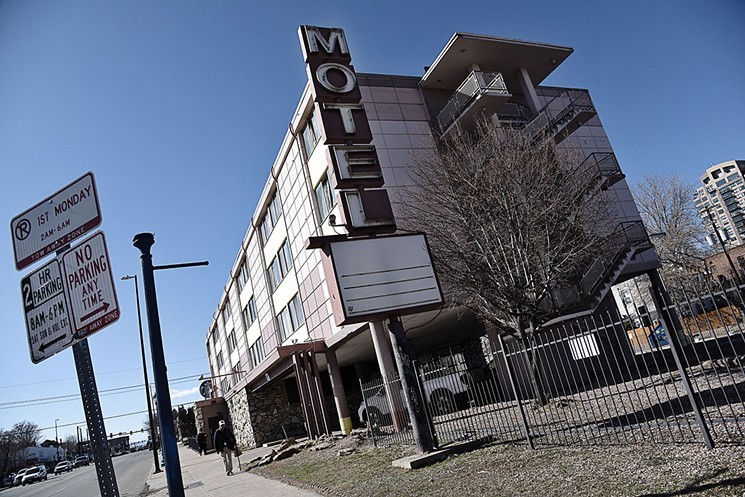 The All Inn today.
Anthony Camera
But after a decade of solid business at the Fountain Inn, the opening of Interstate 70 drew traffic away from Colfax, and the property started a slow slide.

The current manager of the motel, Jong Min Kim, purchased it in 1998, when it was known as the Executive Inn. He renamed it the All Inn, and owned and managed the motel with his family for a few years until they became swamped by debt and the property went into foreclosure.

In 2005, Jesse Morreale, a Denver restaurateur and music promoter, purchased the All Inn. Keeping the Kims on to manage the motel, he set out to transform the closed Gold Room into Rockbar, a name inspired by the building's facade. The bar and venue became a hit with hipsters and lovers of gritty Colfax nightlife. In 2008, with the Democratic National Convention in town, Rockbar pitched itself as the BarackBar, attracting celebrities like Spike Lee, Anne Hathaway and Susan Sarandon.

But while patrons were having fun at the bar, neighbors started to complain about noise and other issues. In August 2012, when Rockbar's liquor and cabaret licenses were set to expire, the city denied Morreale's application to renew. He appealed, but the bar soon shut down.

Although he'd originally envisioned building affordable housing there, Toerber started talking with neighborhood groups, who were enthusiastic about the idea of a boutique hotel that would be an asset to the area. He partnered with the Austin-based New Waterloo hospitality management and development company on the concept; they're working with the Denver Urban Renewal Authority to secure additional financing.

The project's permit application is currently under review at the Denver Building Department; Toerber hopes that construction can get under way this summer.

“Maybe you catch lightning in a bottle once or twice in your career,” he says. “This seems like the opportunity to catch lightning in a bottle.”
KEEP WESTWORD FREE... Since we started Westword, it has been defined as the free, independent voice of Denver, and we'd like to keep it that way. With local media under siege, it's more important than ever for us to rally support behind funding our local journalism. You can help by participating in our "I Support" program, allowing us to keep offering readers access to our incisive coverage of local news, food and culture with no paywalls.
Make a one-time donation today for as little as $1.