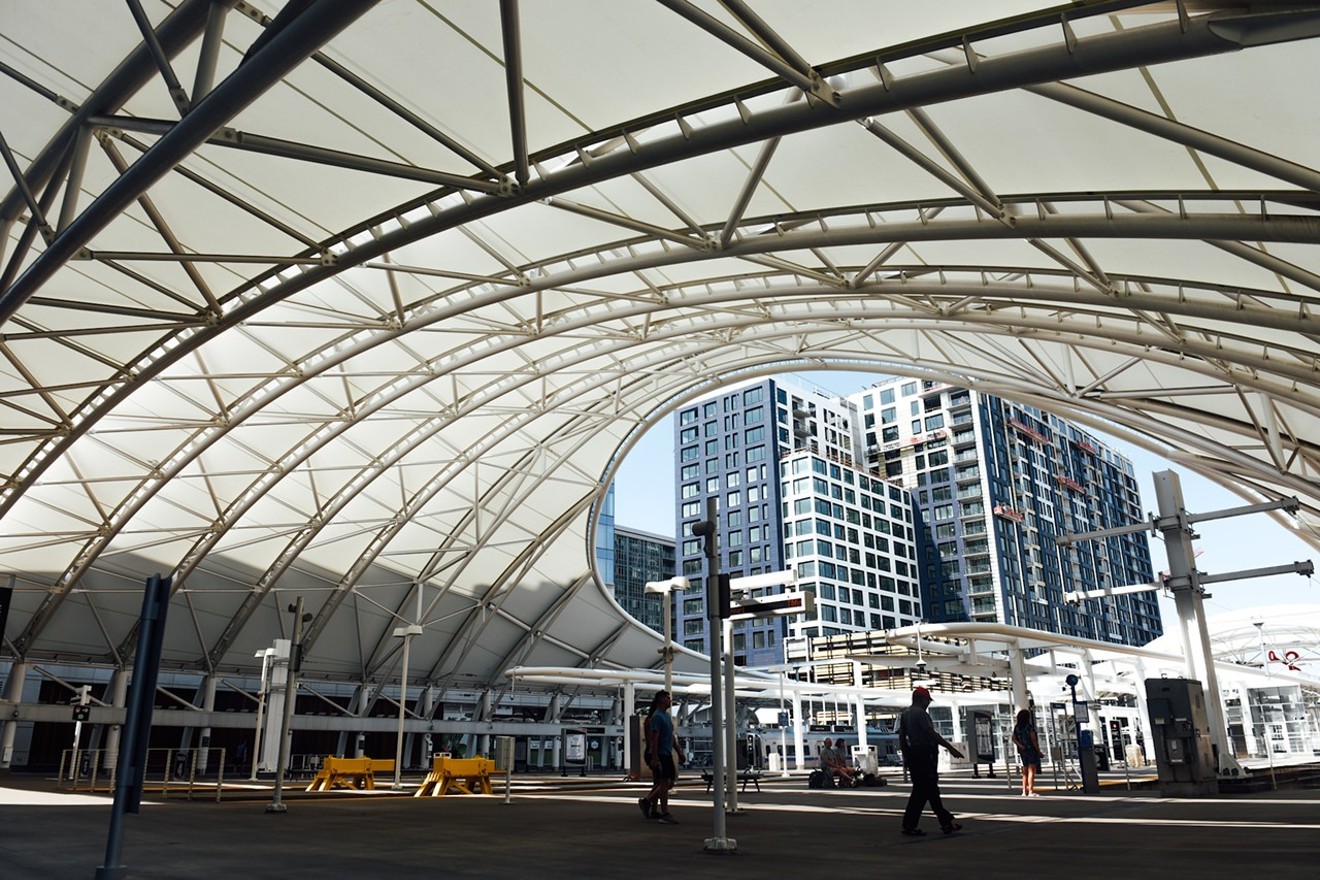 Allied Security provides services for RTD at Union Station...for now. Kenzie Bruce
Allied Universal, the largest security company in the world, could lose its license to operate in Denver over a shooting by a security guard. Not because of the shooting itself, but because the security guard who fired the gun was unlicensed.

On March 23, a security guard employed by Allied Universal was working at a Bellco Credit Union located at 1075 South Havana Street when a woman entered the bank and presented a stolen ID belonging to another credit union member, according to documentation from the Denver Department of Excise and Licenses.

The security guard, William Garner, attempted to detain the woman but was "unable to detain her on Bellco property," the document states. Garner then followed the woman off the property and into a nearby residential area.

"Mr. Garner saw the female suspect get into a black SUV. Then the driver of the SUV attempted to strike Mr. Garner with the vehicle. In an attempt to deter the driver, Mr. Garner discharged his firearm, carried in the course of his employment, into the engine area of the vehicle. The vehicle was not disabled and it fled the scene. Mr. Garner then reported the incident to his supervisor, and DPD responded," the Excise and Licenses document reads.

During the course of the investigation, it was determined that Garner did not possess a valid security license. While Colorado has no official requirements for security guards, Denver is one of a few cities in the state that requires security guards who work in the municipality to be licensed.

On July 18, the Department of Excise and Licenses sent an Order to Show Cause to local supervisors with Allied Universal, asking why it should not have its security license suspended or revoked. The order included allegations that Allied Universal violated rules by allowing a security guard to work without a license and to carry a gun while working, despite not having a license.

There are currently more than 7,000 active security guard licenses in Denver, making it the most common business and occupational license in the Mile High City. "This license will eventually be surpassed in volume by the newly created residential rental license, which is anticipated to have more than 50,000 licenses, but we are just getting started in the licensing for that," Escudero says.

Excise and Licenses plans to hold a hearing on the charges on August 31. It will be overseen by an officer, typically a lawyer or a retired judge, who will then issue a recommended decision on what should happen to Allied Security's license. The final ruling from Excise and Licenses Executive Director Molly Duplechian could have major implications for Allied Universal, since it provides security for RTD, among other clients.

"If a security guard company has their license suspended or revoked in Denver, they would not be eligible to legally provide security guard services for any business or entity in Denver during any period in which they are not licensed," says Escudero.

But there's a twist to this story: That Bellco outlet also has an Aurora address. "Allied Universal’s first priority is safety – the safety of its teammates and the community we serve," says Sherita Coffelt, vice president of communications for Allied Universal. "Everyone at Allied Universal values the opportunity to serve businesses, public agencies and communities in Denver to ensure safety. We take licensing compliance very seriously, and are currently working through the legal process and coordinating with Denver authorities to resolve this matter, which was caused by an administrative error due to an inadvertent misunderstanding of the property address. The service location in question has an Aurora mailing address, and so, our team mistakenly understood it to be outside of the Denver City limits and not subject to Denver licensing requirements."

If the business is found to fall under Denver rules, the final resolution of the case could take one of several different forms: There could be a fine, a suspension that only goes into effect if the company makes another error, an actual suspension or a license revocation.

Allied Universal has already lost business in Denver owing to the conduct of other security guards, who beat up artist Raverro Stinnett in a Union Station bathroom, causing brain damage. In the aftermath of that incident, which even inspired a play, Denver City Council voted against a city contract with Allied Universal worth $25 million in October 2020.

The issue of unlicensed security guards firing guns in Denver came up that month when Matthew Dolloff, an independent contractor hired through Pinkerton to provide security for a 9News team covering a right-wing rally and a counterprotest, shot and killed Lee Keltner, a rally attendee, on October 10. Keltner had slapped Dolloff and sprayed Mace at him before Dolloff fired his gun.

Dolloff was initially charged with second-degree murder, but District Attorney Beth McCann dismissed the charge in March after determining that prosecutors would have difficulty proving that Dolloff was not acting in self-defense.

Because Dolloff did not possess a Denver security guard license, Pinkerton, which had him on its employment roster, initially lost its license to operate in Denver for five years. But in June, a Denver District Court judge ruled that Pinkerton should be able to keep its license based on a language technicality in a Denver ordinance.

This story has been updated to include a comment by Allied Universal, as well as possible resolutions of the case.
KEEP WESTWORD FREE... Since we started Westword, it has been defined as the free, independent voice of Denver, and we'd like to keep it that way. With local media under siege, it's more important than ever for us to rally support behind funding our local journalism. You can help by participating in our "I Support" program, allowing us to keep offering readers access to our incisive coverage of local news, food and culture with no paywalls.
Make a one-time donation today for as little as $1.