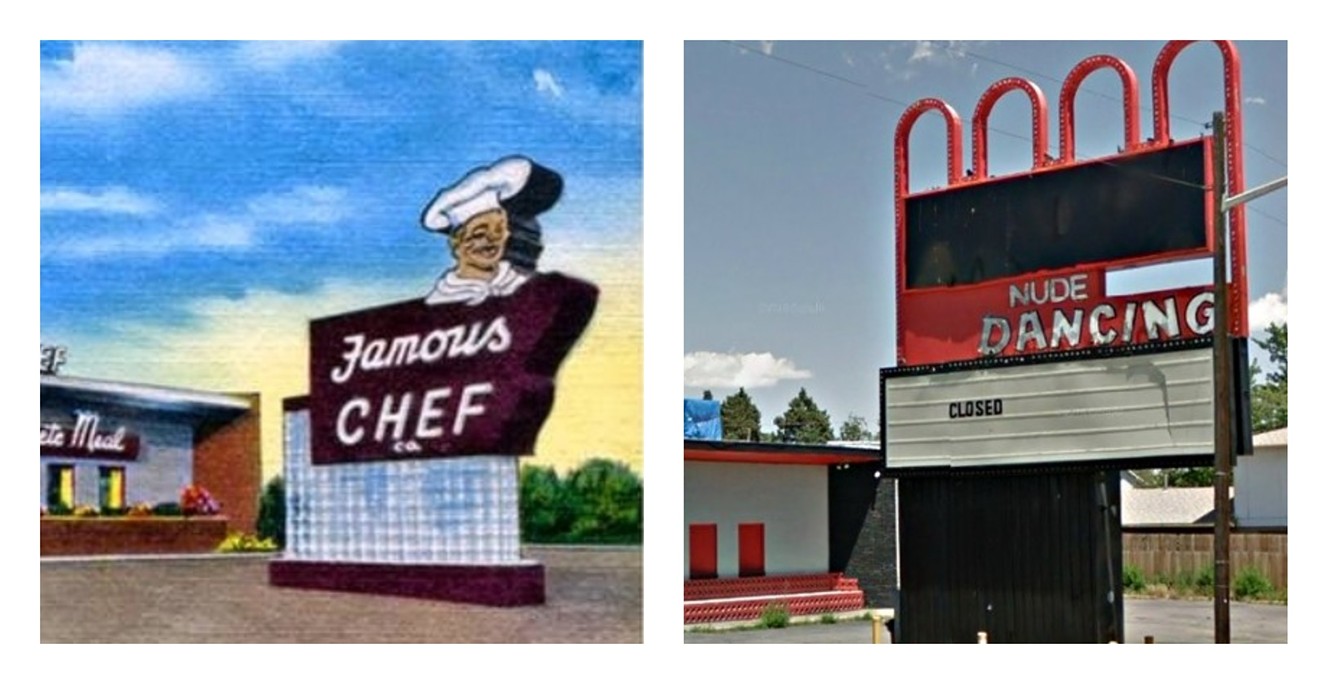 The Famous Chef restaurant site later housed PT's All Nude II. amazon.com/Google Maps
On March 1, Denver City Council unanimously approved the expenditure of $15 million to build an 82-unit affordable-housing complex at 8315 East Colfax Avenue, on a lot that most recently was home to PT’s All Nude II, a strip club.

The project will mark yet another chapter in the fascinating history of the address, which has gone through major changes since the mid-1900s, when the building housed one of the most beloved restaurants of the era. How the site went from a family favorite to the location of a notorious 2015 murder that was among the incidents used as a rationale to shutter PT's All Nude II once and for all is a very Denver story — one that all involved hope is taking a happier turn.

A 2016 post from the East Colfax Neighborhood Association notes that the structure at 8315 East Colfax was built in 1950 to serve as the home of the Famous Chef restaurant, operated by the Willner brothers: Harry, Jack and Milton.

Here's a postcard showing the Famous Chef during its prime; the item is listed for $13.99 on Amazon. 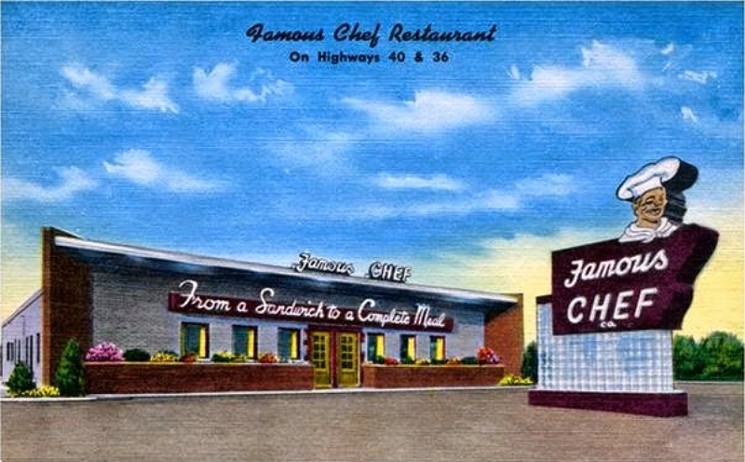 amazon.com
The neighborhood association's piece on the location includes shots of assorted restaurant memorabilia, including an ashtray, the outside of a dinner menu and a matchbook cover.

East Colfax Neighborhood Association
A site called Route40.net, which celebrates the pre-interstate era of which Colfax was an important part, unearthed a 1952 breakfast menu from the restaurant. Back then, the Famous Chef waffle went for 45 cents, a large tomato juice cost a quarter, and a cup of coffee went for a dime. 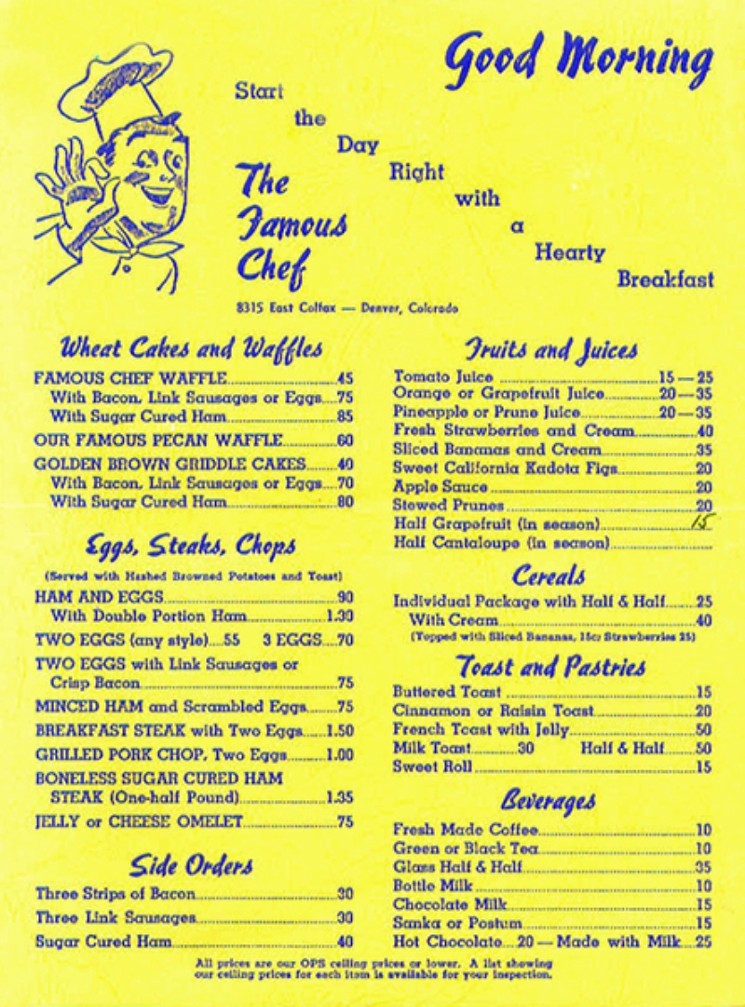 Route40.net
Famous Chef operated until 1967. In 1968, according to the neighborhood association's history, the building was purchased by Gerald "Jerry" Kernis, "the co-founder of the Diamond Cabaret strip club — and he would partner with Bobby Rifkin and Pierre Wolfe in many of Denver's great restaurants, such as The Boiler Room, The Patio, The Quorum, The Normandy, and The Fresh Fish Company." (Click to see the background of Kernis's 8315 East Colfax Corporation from the Colorado Secretary of State's Office.)

In the beginning, the history continues, Kernis transformed the Famous Chef space into "Friday & Saturday's, two different entities — a nite club with a DJ at Friday's and...a live music venue at Saturday's. Rumor has it musician Tommy Bolin played at Saturday's one night." Bolin was the guitar prodigy who performed with Colorado-based Zephyr, the James Gang and Deep Purple and as a solo artist before his tragic death in December 1976. In 1972, the site became known simply as Friday & Saturday's; in the 1980s, it was just Saturday's. 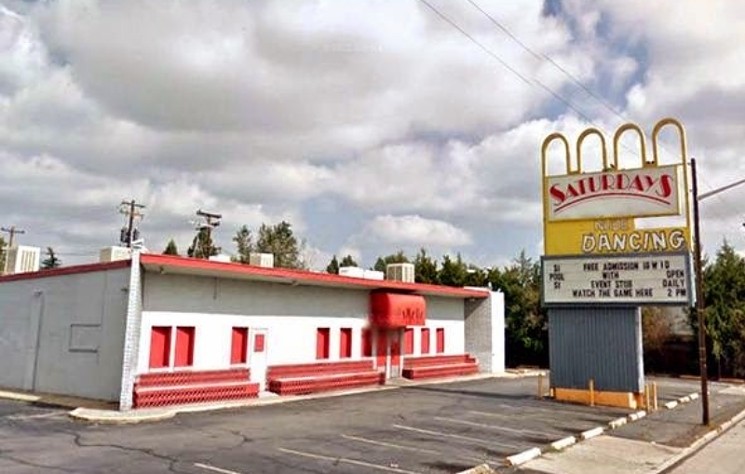 colfaxavenue.org
Saturday's became a strip club in the 1990s and was christened PT's All Nude II in 2015. On September 13 of that year, a tragedy played out involving Jeremy Garcia and Stephen Futrell, nicknamed "Magic." According to an arrest affidavit in the case, Futrell shot Garcia because he didn't like the way Garcia shook his shoulders.

Surveillance video caught images of Garcia and his suspected killer both inside and outside the club. Investigators managed to track down Futrell because he'd given his phone number to a source a couple of weeks earlier. He was subsequently charged with first-degree murder after deliberation, and possession of a weapon by a previous offender — second offense. But in August 2016, Futrell made a deal, pleading guilty to second-degree murder in exchange for prosecutors dropping the other two beefs. He was sentenced to 35 years in prison.

PT's All Nude II closed in 2017, and the property was purchased as part of a $1.3 million deal by the city. In 2018, Mary Beth Susman, then the Denver City Council rep for the area, expressed her hopes that rezoning the spot for affordable housing would help spur an economic revival in its East Colfax neighborhood.

"East Colfax has the lowest income level, the lowest education level and the highest unemployment level of any neighborhood in the city," she told us. "It's only four blocks from Lowry and five blocks from Stapleton, but it's kind of a forgotten place. So we're trying to put some attention there. ... I think we're making some real progress on East Colfax."

It's taken several more years for the project to finally move forward, but that makes sense: The latest incarnation is already seven decades in the making.
KEEP WESTWORD FREE... Since we started Westword, it has been defined as the free, independent voice of Denver, and we'd like to keep it that way. With local media under siege, it's more important than ever for us to rally support behind funding our local journalism. You can help by participating in our "I Support" program, allowing us to keep offering readers access to our incisive coverage of local news, food and culture with no paywalls.
Make a one-time donation today for as little as $1.