The late Amy Cross and a friend, as seen in a photo from her online obituary. everloved.com
Amy Cross didn't have to die. Had medical professionals at the Weld County jail in Greeley who were tasked with inmate care properly diagnosed her as suffering from methamphetamine toxicity last year, she would have recovered — and they had more than seven hours to do so. Instead, they allowed her to writhe in agony, brown liquid escaping from her lips and her fingertips taking on a blue tint, until she finally expired on the floor of her cell.

These are among the claims in a shocking lawsuit filed today, December 6, in United States District Court for the District of Colorado by Denver-based Holland, Holland Edwards & Grossman LLC on behalf of Cross's estate, represented by her three children and her sister, Jennifer Bauder. The defendants include several health-care workers in the employ of Turn Key Health Clinics, an Oklahoma City-based private company that contracted with Weld County to provide medical treatment at the jail, as well as Weld County Sheriff Steve Reams, whose office oversees the facility, and the Weld County board of commissioners.

Attorney Anna Holland Edwards has many years of experience handling cases involving medical crises suffered by inmates and considers the state of care at jails and prisons a national scandal. But she was still shaken by the events that led to Cross's death.

"The nurses told the deputies Amy was having fake seizures and they shouldn't call any more medical emergencies," Holland Edwards says. "But how do you fake foaming at the mouth and having your fingers turn blue?"

According to Holland Edwards, Cross "went into the jail on September 3, 2021, and she admitted recent drug use and having symptoms from withdrawal in the past. There should have been an immediate alert about that, but there was nothing major we can see in her documents."

These quickly became important issues, since Cross had an undetected bag of methamphetamine inside her body at the time of her admission to the jail, and during the hours that followed, it apparently broke open, triggering a long series of worsening effects.

Sometime after 4 p.m. on September 4, Holland Edwards continues, Cross "started experiencing chest pain and yelling that she needed to go to the hospital. So deputies took her to medical, where she was behaving erratically — getting out of a wheelchair and skipping, then laying down on the floor. She also had a high pulse and was shaking and clammy. These are indications of a heart condition, and the nurses offered an EKG, but they said she refused to do it — though it's unclear if, because of her symptoms, she couldn't do it, or didn't understand what they wanted to do. They should have recognized these emergency symptoms and done the evaluations they needed to do. But instead, they marked her down as refusing treatment and put her back in her cell, which is outrageous to me." 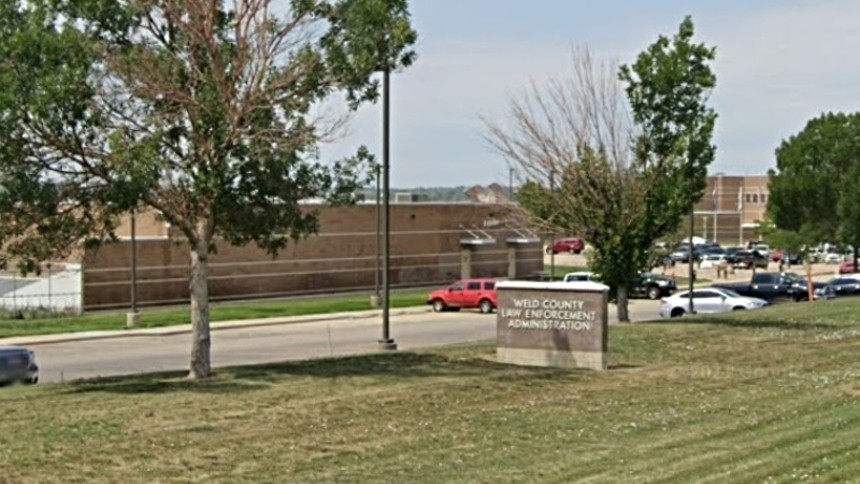 This complex includes the Weld County jail, where Amy Cross experienced her health crisis.
Google Maps
So, too, was a supervisor's explanation to nurses for why Cross shouldn't be checked out at a hospital, as quoted in the suit: "She is acting a fool."

By 6 p.m. on September 4, Cross had been moved to a different unit, "and the deputies were noticing that she was deteriorating," Holland Edwards says. "She was lying on the floor because she was so hot and continuing seizure-like activity. But they were told not to call any more medical emergencies because she was supposedly having fake seizures." Similarly, she says, the brown foam emitted by Cross and her blue fingertips were dismissed as spit bubbles she was forming and a standard reaction to a lack of oxygen.

Finally, at around 11:25 p.m., "they finally come in to check on her again," Holland Edwards recounts, "and they discover that she has really low blood pressure. But then they mill around for a while before eventually calling a Code 5." But the personnel summoned by this emergency medical alert weren't scheduled to get there until 11:40 p.m., and by the time they arrived, "Amy was dead on the floor from a treatable condition."

The lawsuit also alleges a coverup of sorts, maintaining that the paramedics who'd rushed to the scene were told that Cross's symptoms hadn't started to manifest until approximately twenty minutes before she died.

Turn Key was contracted to provide medical services at the Weld County jail in December 2019, and the complaint asserts that by the time the paperwork had been signed, the company had already been named as a defendant in dozens of lawsuits "alleging they provided inadequate medical care to inmates." Numerous examples are included in the document.

Still, Holland Edwards doesn't see Turn Key as an outlier when it comes to medical care for inmates. "Like all private medical companies serving jails, there's a complicated incentive not to hospitalize, because they get paid a fixed amount — so the fewer people they hospitalize, the higher the profit," she notes. "They advertise themselves as bringing down costs by having fewer hospitalizations, and you can do that in a good way, by providing care before someone is hospitalized. But you can also do it by just not hospitalizing them, which is what happened with Amy. Because she was supposedly 'acting a fool,' she wasn't going to go to the hospital: That was the instruction to the nurses, and they followed it over the course of hours and hours as she got worse in front of them."

In the long run, Holland Edwards believes, "there's a fundamental disconnect in the way we've allowed jails to treat inmates. These are humans with real needs, but the private medical companies repeatedly gamble that they're lying or that they have a short-term problem that's not very serious — and maybe they'll get out before it gets worse. But the person who loses that gamble is the inmate. A lot of times it goes fine, but when it goes wrong, the inmate is the one who loses. And in this case, that person was Amy Cross."

In response to questions about the lawsuit, Weld County spokesperson Jennifer Finch says, "We are aware of the suit, but have not yet been served with any documents. Once served, we will review with our clients. We do not comment on pending or ongoing litigation cases..

This post has been updated to include a response to the lawsuit from Weld County.
KEEP WESTWORD FREE... Since we started Westword, it has been defined as the free, independent voice of Denver, and we'd like to keep it that way. With local media under siege, it's more important than ever for us to rally support behind funding our local journalism. You can help by participating in our "I Support" program, allowing us to keep offering readers access to our incisive coverage of local news, food and culture with no paywalls.
Make a one-time donation today for as little as $1.