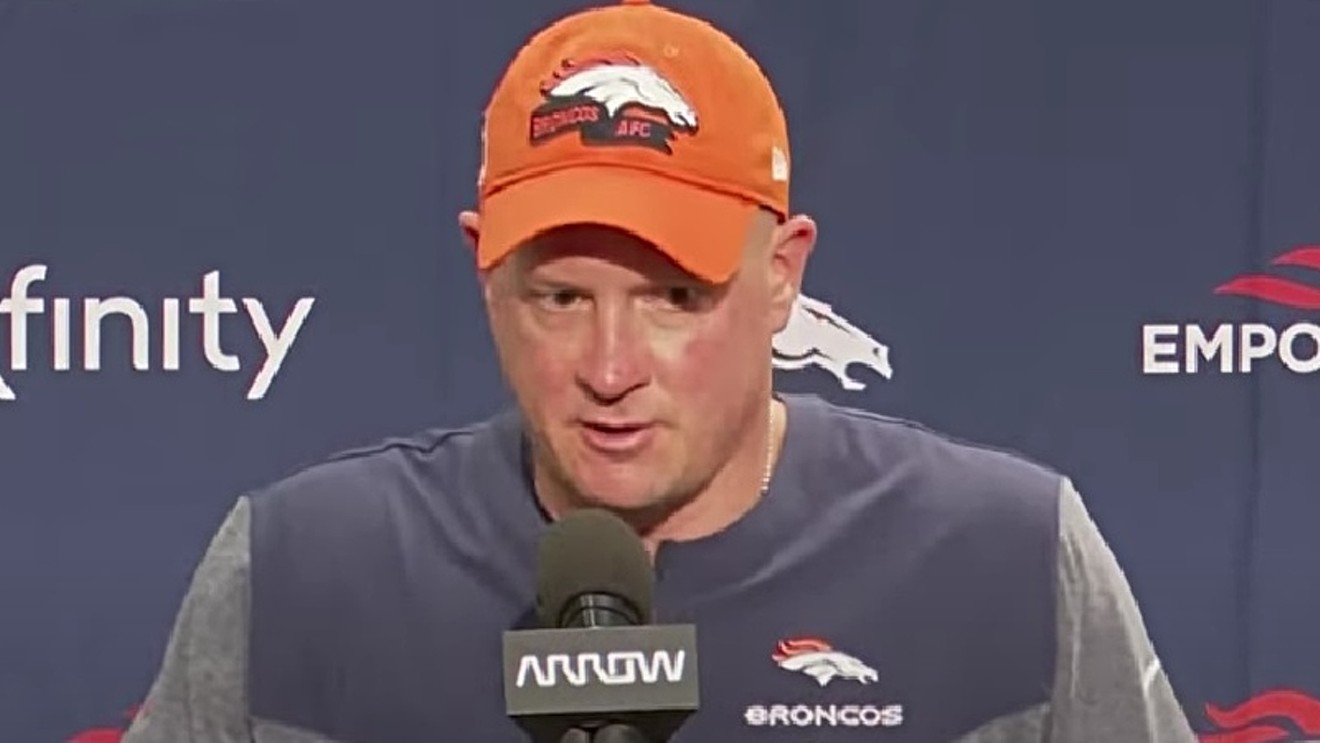 The match-up between Denver and the Hawks was heavily hyped, since it featured quarterback Russell Wilson facing off for the first time against his former squad at Lumen Field, the stadium where he cemented his legend. The contest was also the inaugural Monday Night Football broadcast of the season, with the high-priced tandem of Joe Buck and Troy Aikman making their bow on ESPN's main channel and ex-Bronco Peyton Manning (joined by little brother Eli Manning) looking increasingly exasperated on ESPN2.

Given that Seattle is arguably the toughest place for a visiting team to play in the country, thanks to the volume generated by a fan base affectionately dubbed "the 12s," longtime Broncos followers were wary of the match-up despite an obvious talent disparity: The new Seahawks' quarterback, Geno Smith, is the epitome of an NFL journeyman, while Wilson is a future Hall of Famer. But Wilson didn't play during the pre-season, raising concerns among the faithful that growing pains would be on display in prime time — and they sure as hell were.

Not that Wilson deserves all or even most of the blame. His stat line — 29 of 42 for 340 yards and a touchdown, with no interceptions — was more than good enough to have earned a victory. But the defense looked iffy, especially on Seattle's first possession, a six-play, seventy-yard touchdown drive that gave Denver loyalists the first sinking feeling of many. And even after the D righted itself, the Broncos returned to an old theme — getting the ball into the red zone but often falling short of the end zone. This time around, though, the failures were even more exasperating than usual, with fumbles by turnover machine Melvin Gordon and normally reliable Javonte Williams within arm's reach of the goal line and a third visit inside the ten that ended in a field goal — a sequence of events that should have generated 21 points but only resulted in three.

The capper, though, was the Broncos' final push for victory as time wound down. Denver had a first down at its own 49 with 1:24 left — but three plays later, Wilson and company faced a fourth and five from the Seattle 46. At that point, instead of trusting Wilson to make a conversion, Hackett burned the team's remaining timeouts and called in kicker Brandon McManus to attempt a 64-yard boot that would have been the second-longest in league history.

When McManus (predictably) missed, all of Broncos Country saw red — and those with Twitter accounts shared their ire far and wide, with much of their vitriol aimed at Hackett. Welcome to Denver, coach.

Here are the twenty most memorable angry tweets about the game's outcome:

Broncos' Nathaniel Hackett says he was fine with his call to try 64-yard field goal https://t.co/cInWXbwDX5 via @Yahoo Stupid is as Stupid does I guess...

I’m making angry dubstep after that .@Broncos game. That decision to kick a FG w Russ got me LIVID

I can’t even sleep now. I’ve never been so angry at a season opener. The broncos beat themselves. Period.

Many words can describe how I feel. I know it's only the first game but come one it was suppose to be an easy game. Six years of waiting and this is how it starts when hope is restored!?! I can't rn

I'm not even a Broncos fan and I'm ANGRY

As a broncos fan I went from angry to unable to stop laughing. That decision was INSANE

HOW THE FUCK DID YOU GUYS LOSE BY A MISSING FIELD GOAL TO THE SEAHAWKS!!! This is as painful as when that happened to the Vikings, Congratulations Denver Broncos you've have proven my point yet again LMAO https://t.co/HmspLSxQLD

Woke up still in awe at how abysmally stupid Nathaniel Hackett is. #Broncos

I don’t want to hear a damn thing about the fumbles possibly changing the outcome of the game.

The #Broncos were so undisciplined and made stupid ass coaching decisions.

Woke up stupid sick..
Thanks @Broncos

@Broncos you guys are so fucking stupid

The Broncos really wasted 40 seconds to call a timeout so they can miss a 60 yard field goal When they had Russell Wilson at QB with 3 time-outs. I can't stand stupid coaching. #MondayNightFootball

Ngl, being a Broncos fan is fucking depressing. Why not just put trust in a potentially HOF QB that you just PAID, on a 4th and 5? Love McManus but like make it easier on him. This along with ass time management, a fuck ton of penalties and two red zone fumbles. I just quit

How tf do you have 3 time outs with a minute left and you still lose the game???

Broncos head coach need to get his ass beat for that and if I’m Russell Wilson, im saying fuck him and doing my own thing to win the game.

What the fuck where the #Broncos thinking going for that FG at 4th and 5??? Your odds are next to zero. Picking up 5 yards and getting out of bounds with 20 seconds, that's not impossible. Idiot coach. #mnf pic.twitter.com/Wy6qtZMYJc

#Broncos Hold on. An NFL head coach chose to save his time outs during a must have field goal drive, forced a 64 yarder instead of trusting his 250 million dollar QB and then finally used the timeouts for kneel downs? How can anyone in Denver believe in this guy now? #idiot

@Broncos you guys are so fucking stupid

I’m irrationally angry about a football game. Must be Broncos season