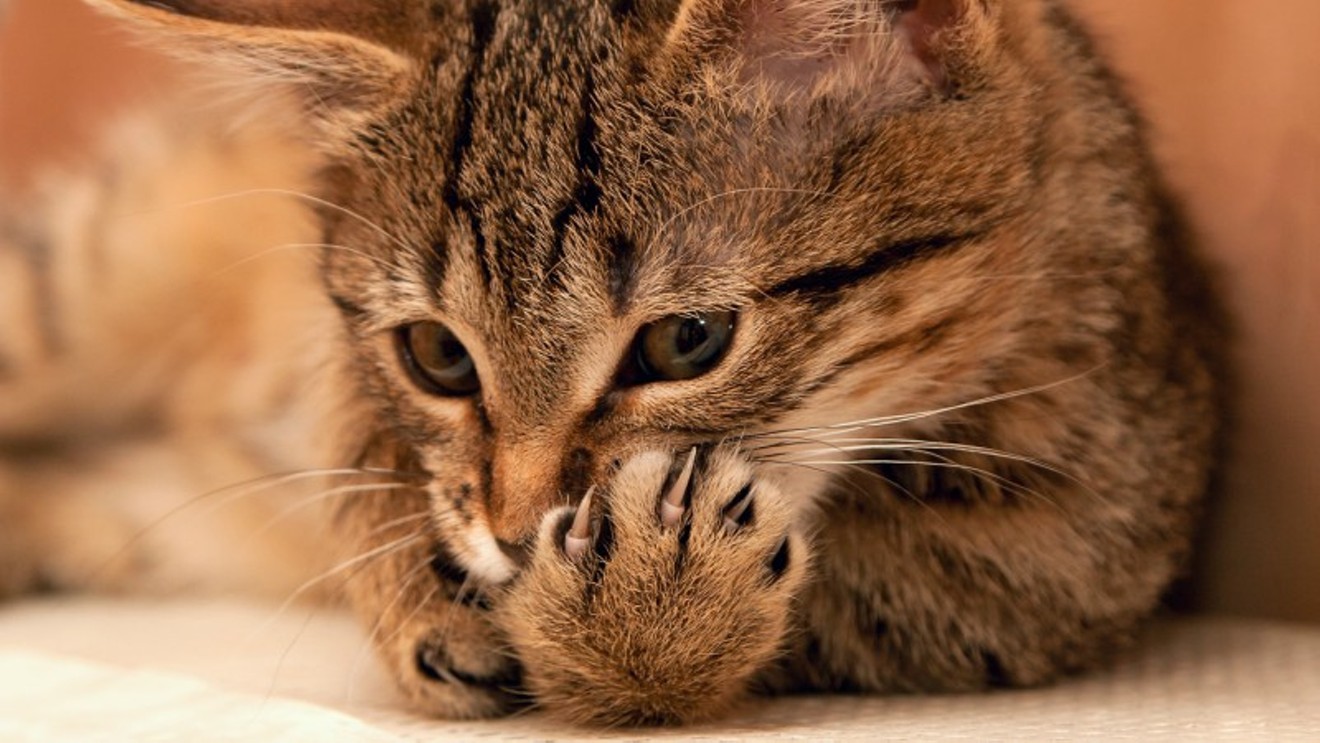 The vote was unanimous, as it was upon first reading one week earlier, as indicated in our previous coverage, on view below.

Continue for our earlier reports.

The 11-0 vote suggests that the bill, put forward by Councilwoman Kendra Black, will sail through its second reading, scheduled for next Monday, November 13. The measure would then immediately go into effect.

Black tweeted twice about the cat-declawing ban yesterday evening. One message reads: "'A cat declaw ban is a win-win-win. For cats, for community and for vets,' says @pawproject founder Jenny Conrad in support of our bill."

As we noted in our earlier report, Conrad was the subject of a 2013 Westword feature article about cat declawing.

Should the bill pass, as anticipated, Denver will become the first community outside of California to prohibit cat declawing. Continue for more details, as well as the advocacy of Animal Planet star Jackson Galaxy on behalf of the ban.

Jackson Galaxy considers cat declawing to be needlessly cruel.
Facebook
Original post, 6:12 a.m. November 6: Tonight, November 6, the Denver City Council will hear the first reading of a proposal by Councilwoman Kendra Black to ban the declawing of domestic cats, and among its supporters is Jackson Galaxy, best-selling author and star of the long-running Animal Planet program My Cat From Hell and a new show, Cat Vs. Dog, which debuts on Animal Planet this Saturday, November 11.

Galaxy currently lives in Los Angeles, but he's spent plenty of time in Colorado. He called Boulder home from 1992 to 2007 and began working with rescue cats at the Humane Society of Boulder Valley; he starred in a fundraiser for the facility in 2015. About the current bill, Galaxy writes via email, "I humbly urge the cat-loving residents of Denver city and county to stand by Councilwoman Black’s proposal to amend the Denver Animal Control Code to ban the inhumane practice of declawing."

And in a July 2014 followup, Prendergast noted that while officials of the American Veterinary Medical Association attending the organization's national convention in Denver stopped short of calling for the practice to end, they stressed that it constituted major surgery, and used the word "amputation" to describe a procedure that involves removing the last bone of a cat's toe.

Denver City Councilwoman Kendra Black.
denvergov.org
That same year, the Colorado Veterinary Medical Association put out its own position statement about cat declawing. The complete document is accessible below along with Black's bill, but an excerpt reads: "In most cases, declawing is not a medically necessary procedure. The decision of whether to declaw should be a collaborative one between owner and veterinarian, and broached only after all other alternatives have been exhausted."

Is cat declawing the sort of issue that local leaders should be tackling, particularly in light of so many other pressing matters on their agenda? Reps in at least seven cities to date have answered that question in the affirmative.

According to the New York Times, the first declawing ban passed in West Hollywood back in 2003. Six years later, seven other metro areas (Beverly Hills, Berkeley, Burbank, Culver City, L.A., San Francisco and Santa Monica) followed suit, and while bills are pending in New Jersey and New York, the Denver proposal is on a faster track. As such, the Mile High City could become the first community outside California to prohibit declawing.

Getty Images
According to Black, also corresponding via email, "This ban is important because it is a cruel but unnecessary procedure inflicted on cats that is painful, often disabling and the cause of bad behaviors like unwillingness to use a litter box and biting, which can result in owners giving up their cats. Cat declawing has been 'sold' to cat owners as a simple way to prevent cats from scratching furniture, but owners are not told that the procedure actually cuts off the tips of cats’ toes. Nor are they told about alternative and effective and humane ways for cats to live in the home, like clipping their claws, providing scratching pads and sisal posts."

She adds: "Until the veterinary community is willing to ban the cruel and inhumane procedure, it’s up to community leaders to prohibit it in Denver and send a message."

Galaxy is doing his part as well. In addition to preparing for the launch of Cat v. Dog, he's currently on a national book-signing tour promoting his latest tome, Total Cat Mojo: The Ultimate Guide to Life With Your Cat. But he took time out of his schedule to laud Black's efforts and decry cat declawing in general.

"For cats, scratching is not a luxury, it's a necessity; claws are not accessories, they are body parts," he writes. "There was an unspoken deal we made with these animals when bringing them into our home and calling them companions: We would keep them safe from harm. We must stand by that promise by banning declawing and ending the senseless mutilation."