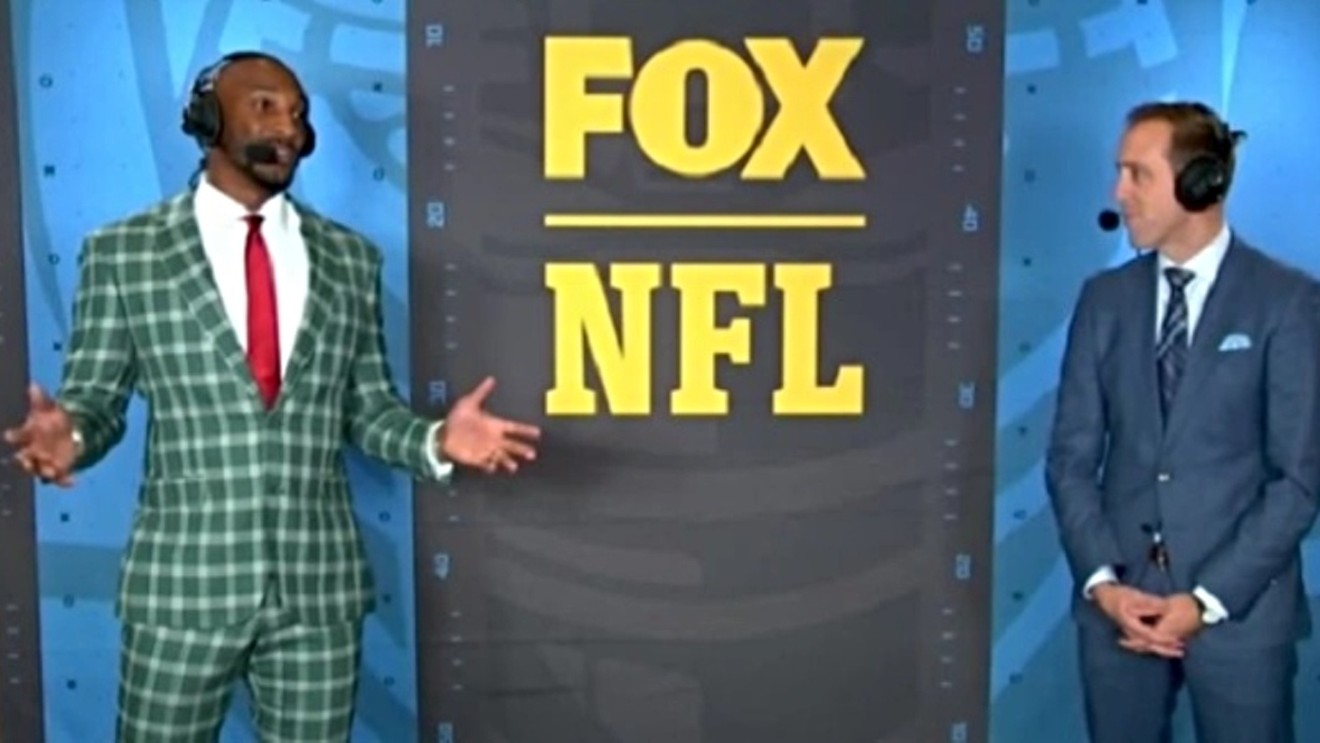 Aqib Talib (with Fox Sports partner Dan Hellie) has made an unexpected splash as a broadcaster. Fox Sports
Update: Former Denver Bronco Aqib Talib was to start his role on Amazon Prime's Thursday Night Football broadcasts early next month. But then his brother was arrested in connection with the fatal shooting of a Texas youth-football coach on August 13. On August 21, the NFL Network's Ian Rapoport confirmed that Talib, who was present at the game where the shooting took place but has not been implicated in the crime, confirmed that Talib won't make his debut as scheduled. See Rapoport's Twitter announcement below, followed by our previous coverage.


Just spoke to Aqib Talib. In light of the recent tragedy, he is going to step aside from his broadcasting duties at Amazon to spend time with his family.

Original post, 6:47 a.m. August 19: As a member of the Denver Broncos from 2014 to 2017, a span that included the team's victory in Super Bowl 50, cornerback Aqib Talib was a fan favorite for actions both on and off the field that teetered between hilarious and insane — and his unlikely emergence as a broadcaster was about to get a big boost with his announced role as an Amazon Prime contributor for the 2022-2023 season.

But suddenly, Talib is getting attention for all the wrong reasons. Yesterday, August 15, his brother, Yaqub Talib, turned himself in to authorities over the fatal shooting of Michael Hickman, 43, during an argument about officiating at a youth football game in Lancaster, Texas, two days earlier. And while Aqib Talib hasn't been implicated in any way, his presence at the game guaranteed that his name would be in the hundreds of headlines generated by the shocking incident.

When Talib was a Bronco, he earned a reputation for play that went right up to the line, and sometimes over it. In November 2015, for example, he poked a member of the Indianapolis Colts in the eye as time was  running out, all but eliminating any chance for Denver to make a last-chance comeback bid; the Colts won 27-24. And then there was the zany 2017 episode during which he yanked a chain off Oakland Raiders receiver Michael Crabtree's neck while allegedly trying to tackle him — a move caught on camera.

Between these two events, in June 2016, Talib managed to get shot in the leg while visiting Dallas. At first he was said to have been perforated at a strip club where two other people took bullets. However, a law enforcement officer who spoke to WFAA-TV the following October admitted that police doubted he was actually at the club and had concluded that he'd accidentally shot himself — something Talib couldn't confirm, since he acknowledged being too drunk to remember everything that went down.

After leaving the Broncos, Talib jumped to the Los Angeles Rams and was later traded to the Miami Dolphins before calling it quits at the end of the 2019-2020 season. But the next year, he suddenly popped up in the Fox Sports broadcasting booth. His incredibly enthusiastic, thoroughly unpredictable style of delivering insights alongside partner Dan Hellie prompted divisive reactions on social media, but the lovers soon outnumbered the haters, especially after the NFL Network's Rich Eisen became among Talib's biggest boosters, as evidenced by the video below:
As Talib's profile kept rising, rival suitors began seeking him out — and in June, news broke that he'd been chosen for Amazon Prime's Thursday Night Football crew, the streaming network's flagship NFL offering.

But then came the shooting on Saturday, described by the Lancaster Police Department with this: "Upon arrival, officers were notified of a disagreement among coaching staff and the officiating crew. During the disagreement the opposing coaching staff were involved in a physical altercation and one of the individuals involved in the altercation discharged a firearm striking one adult male. The victim was transported to a local hospital for treatment where he was later pronounced deceased."

Shortly thereafter, Aqib Talib's attorney released a statement to TMZ. It reads: "Aqib was present when this unfortunate incident occurred and is very distraught and devastated over this terrible loss of life. He would like to convey his condolences to the family of the victim and to everyone who witnessed this unfortunate tragedy."

There's been no indication that Amazon Prime is going to put Talib on the shelf over the shooting. But with the first game just under a month away (the Kansas City Chiefs and the Los Angeles Chargers are slated to face off on September 15), his unexpected second act could be hanging in the balance.
KEEP WESTWORD FREE... Since we started Westword, it has been defined as the free, independent voice of Denver, and we'd like to keep it that way. With local media under siege, it's more important than ever for us to rally support behind funding our local journalism. You can help by participating in our "I Support" program, allowing us to keep offering readers access to our incisive coverage of local news, food and culture with no paywalls.
Make a one-time donation today for as little as $1.