Council Member: Why Aurora Should Kill Its Pit Bull Ban

Melissa Keizer/Getty Images
Aurora is among a handful of Colorado cities, including Denver, that continue to ban pit bulls. But despite the fact that a ballot measure that would have eliminated Aurora's provision lost big in 2014, moves are afoot that could potentially change that.

In the wake of Castle Rock ending its prohibition against pits last year, Aurora City Council member Charlie Richardson, with an assist from fellow councilperson Allison Hiltz, has put forward a proposal (access it below) to repeal the current ban in favor of an ordinance that would target aggressive animals in general.

An online survey about the bill, as well a separate one specific to the American Bully breed and Aurora's animal ordinance as a whole, is open through July 15; click to take part.

According to Richardson, his interest in the subject "was piqued by a young man who owned some American Bully dogs. He asserts that they are a separate and unbanned breed. The United Kennel Club recognizes them, but the American Kennel Club doesn't — but the city staff put his breed within the three breeds that are banned in Aurora. He started coming to city council meetings pleading for some relief."

Richardson was sympathetic to the man's arguments. He and his wife own a Cane Corso, a type of dog previously banned in Aurora; originally, the city nixed ten breeds before reducing the number to three. Moreover, he says, "we have friends in Littleton with pit bulls, and they are the sweetest, most docile dogs you can imagine."

He adds, "My wife and I see pit bulls all over Aurora, and if you speak privately and confidentially with animal-care officers, even they are sympathetic. They look the other way because the determination [of whether a dog is a pit bull] is a subjective one, based on perceived characteristics." 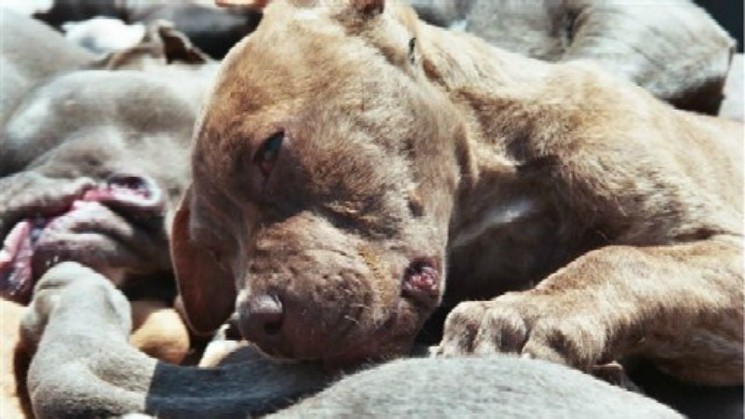 A photo of a euthanized pit bull at Denver's animal shelter leaked to Westword in 2006.
File photo
With that in mind, he continues, "I asked the city attorney's office to develop a state-of-the-art dangerous animal ordinance" — one that focuses on "people who don't take their ownership seriously. Pit bulls got a bad reputation ten, fifteen, twenty years ago because of frankly negligent ownership, and because they were at one time associated with gang membership, where the display of a pit bull was considered an illustration of defiance and a status symbol as far as being rough and tough. But if you have a big, powerful dog — any big, powerful dog — you have to be very responsible and very mindful of the potential damage it can do."

The proposal that resulted "has very precise, remedial provisions in case your dog acts aggressively," Richardson explains, "and it sets up a number of steps that need to be taken. But contemporaneously, it eliminates the breed ban."

Indeed, references in Aurora's current ordinance to the American Pit Bull Terrier, the American Staffordshire Terrier and the Staffordshire Bull Terrier "or any dog displaying the majority of physical traits or genetic markers of any one or more of the above breeds" would be stricken under Richardson's proposal. So, too, would passages about DNA testing to determine the existence of the aforementioned "genetic markers." Moreover, a new sentence states: "No animal declared aggressive, potentially dangerous, or dangerous by any other jurisdiction based solely on size, breed, mix of breeds, or appearance shall be subject to this section."

To gauge how voters feel about potential policy shifts encompassed by the various animal-related regulations, Aurora staged three public meetings last month on top of the online survey — and Richardson conducted his own informal poll via Aurora's Nextdoor site. "I got about 200 responses," he reveals. "It was pretty vigorous: About 60 percent said get rid of the ban, around 30 percent said keep it and 10 percent said, 'Let's have another advisory vote'" like the one in 2014, which, in his view, was held "in a pit-bull-hysteria period."

There's no firm date for when the results of the city-conducted survey will be shared with city council. However, Richardson doesn't expect action on them prior to November, when voters will choose a mayor and five members of council, including him; he's running for re-election. But after the ballots are counted, Richardson thinks there's a better-than-decent chance that Aurora could reverse course on pit bulls.

Click to read the proposal about aggressive animals in Aurora.
KEEP WESTWORD FREE... Since we started Westword, it has been defined as the free, independent voice of Denver, and we'd like to keep it that way. With local media under siege, it's more important than ever for us to rally support behind funding our local journalism. You can help by participating in our "I Support" program, allowing us to keep offering readers access to our incisive coverage of local news, food and culture with no paywalls.
Make a one-time donation today for as little as $1.